One gram of soil has been estimated to contain as many as 1010 prokaryotic organisms. The number of bacterial species ranges from several hundred to almost nine thousand. These numbers have been used to estimate that there are 10 billion species of bacteria on Earth. Although the vast majority of these microbes have yet to be identified, the critical roles they play in many environmental processes that sustain life on Earth are being recognized.

Recently, scientists have begun studying the biogeography of microbes, determining their distribution on local, continental, and global scales. Soil composition, oxygen levels, temperature, pH, types of nutrients, and water availability affect the abundance of bacteria in soil. Other factors that affect the biodiversity of bacteria are land-use type, plant species present, temperature, salinity, and contamination with pollutants. Ecologists are concerned about the effects of land use on soil microbial communities and the effects on ecosystem functioning.

The first step in characterizing bacterial communities in soil is to estimate the viable numbers of microbes present in a sample. This will be accomplished by plating a sample of the soil that has been serially diluted in sterile saline and using the number of visibly growing colonies to calculate the original colony forming units per milliliter of diluted sample plated, or CFU/mL.

Identifying the species of cultured bacteria begins with an examination of their macromorphology, or visible appearance of their growth colonies without the aid of a microscope. Microbiologists use a standard set of terms when describing macromorphologies; we will use an abridged version of this. You will then perform quadrant streak for isolation on one of these colonies. Once you have a pure culture (only one type of bacteria) you will perform a Gram stain, biochemical assays and a genetic analysis of the isolates.

The purpose of this lab is to calculate the CFU/mL and describe each of the macromorphologies observed from soil samples taken at four different locations. The general hypothesis is that bacterial communities at each of these chosen locations will differ—either in the numbers of viable colonies supported, the types of macromorphologies isolated, or both. Prior to this lab, your instructor may have had you research and rationalize why you would want to study different locations, and why the bacterial communities at each may differ.

Bacteria are often counted in the laboratory by the viable plate method, where a dilution of bacterial culture is plated onto an agar medium. Following incubation, plates containing 30–300 colonies are counted. This range was chosen to include enough colonies for statistical accuracy, but not too many that colonies compete for nutrients, or that you can accurately count. Counts are then used to calculate the number of colony forming units per mL of diluted culture plated, or CFU/mL. 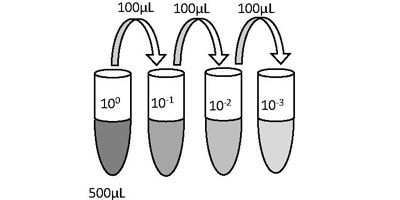 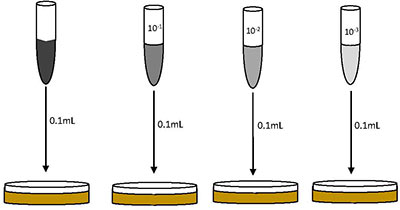 Day 2 – Results and Calculation of CFU/mL

Write your calculation in scientific notation to 2 decimal places (as shown above).

Record in your lab notebook different descriptions and total number of colonies that you cultured. Include: colony ID, soil location, date plated, size, shape, color, texture, and total number of similar colonies you cultured. Use only the standard descriptions (shown below). Be meticulous in your observations and documentation. Each colony on the plate should be evaluated.