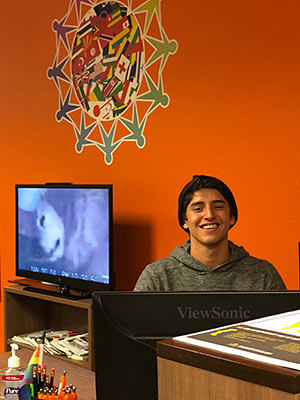 Jefferson Phillips-Retana is an eighteen-year-old international student from Costa Rica who started his Graphic Communications program this fall at Truckee Meadows Community College (TMCC) in the beautiful city of Reno, Nevada. In high school, Jeff realized he wanted to continue his education while traveling the world. Since Jeff’s family does not have the means to support his studies abroad, he did some research and learned about Fundación Costa Rica Estados Unidos para la Cooperación (CRUSA), a nonprofit organization that gives financial support to students who want to study in the USA. Despite the nervousness of leaving his home country for the first time, Jeff’s incredible motivation to grow and develop the skills to reach his academic and professional goals has pushed him to take such big step towards his future.

Jeff lives in an international house close to downtown Reno and has really enjoyed the experience of having roommates from different countries. Jeff describes them as being incredibly gentle and always willing to help. “Even though we are all different, we are all people. We understand each other and we get along really well. We know the struggle that being a college student involves so we understand and help each other whenever it’s possible. I feel really lucky because the international house is a place that I can call home.”

Jeff has already made a lot of friends on campus. From meetings with the International Club to hanging out with classmates, he’s always looking for something fun to do in his spare time. He’s been to Lake Tahoe with his friends a couple of times and is currently planning his Spring Break trip to southern California next March.

In addition to taking classes, Jeff works at the Diversity and International Student Center Office (DISCO) at TMCC. He’s also applied to become a blogger with Study in the USA and looks forward to sharing his experiences with other international students. “I encourage everyone who wants to learn about new cultures and have new adventures to become an international student. Studying abroad is an amazing experience that will open your mind. In addition to succeeding academically, it’s necessary to become independent, to adjust to other cultures, to organize one’s time, and to learn how to cook.” He admits to still struggling in the kitchen, though.