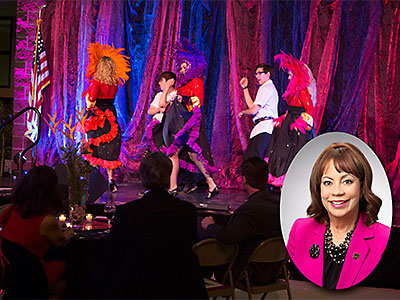 Students, faculty, state officials and friends of Truckee Meadows Community College gathered on Dec. 11 to celebrate the tenure of Maria Sheehan, Ed.D., as the College’s leader. Performing Arts students sang and danced at the event, and community leaders spoke about her accomplishments.

One of the featured speakers at the celebration was Michonne Ascuaga, Nevada Gaming Commission and Vice-Chair of TMCC’s Institutional Advisory Council. Ascuaga applauded Sheehan’s service to individual students. A young woman Ascuaga knew wanted to become a nurse, but she felt the prospective caregiver needed guidance and so she emailed Sheehan, asking if TMCC’s President would consider mentoring the new student.

“The response came within minutes, as Maria wrote that ‘there’s nothing to think about – I’d love to be her mentor’,” Ascuaga said.

Spencer Schultz, President of the TMCC Student Government Association, stepped up to the mic and said that he would like to emulate Sheehan’s leadership.

“She is a leader who acts confidently and says ‘follow me’,” Schultz said.

Dalpe commended Sheehan’s devotion to student access and success in recent years of budget crisis, when the College’s state funding was cut by more than 30%. Sheehan stayed committed to vital programs for students, such as Success First, and successfully established new programs, degrees, and carried out the construction and remodeling of new facilities, Dalpe said.

The first two Bachelor of Applied Science degrees were approved in May by the Nevada System of Higher Education, and the William N. Pennington Health Science Center opened for the 2015 Fall Semester.

Dalpe will become acting President of TMCC in January.

Dr. Sheehan has led TMCC for eight years. Staff members note that some of her greatest strengths are reflected in the respect she models and encourages in the College community.

“President Sheehan has always emphasized the importance of collegiality and respect among campus constituents as differing viewpoints were shared,” said Ron Marston, Graphic Communications Professor and past Faculty Senate Chair. “She has been an advocate for promoting within, allowing for folks working at TMCC to advance in their career paths.”

Sheehan said that valuing all in the College community is vital to leadership.

“Respect views of the ones that are closest to the issues at hand,” she said. “Listen and learn prior to giving guidance.”

This leader who has accomplished great goals in her more than 40-year career started her life’s work as an elementary school teacher in South Pasadena, California. Sheehan was initially inspired by a family member, a beloved aunt.

“My aunt was profoundly deaf – I became interested in her world of communication, and that area of education became an interest,” she said. “I was drawn to work with deaf children and became a first-third grade teacher. We put on productions of 'Snow White' and 'Cinderella'. The deaf children got to be the stars and the children who could hear were their interpreters.”

At TMCC, Sheehan directly addressed budget shortfalls during the Great Recession, and increased private financial support for the College. In addition to opening the new Health Science Center, she has overseen an extensive remodel of the Applied Technology Center.

Sheehan serves on numerous boards in Northern Nevada: American Heart Association and the Circle of Red, Nevadaworks, the Nevada Women’s Fund and now the Giving Circle, Big Brothers Big Sisters, KNPB Channel 5 Public Broadcasting, and the Economic Development Authority of Western Nevada (EDAWN). She is a member of Reno Rotary at Harrah’s noon club, and on the Rotary International Committee.

Upon retirement from TMCC, Sheehan will be joining an altruist project in Central America to help renovate a facility for orphaned children with special needs. The project, Casa Providencia, was started a few years ago by an American couple. To participate in a leadership role, she will be refreshing sign language skills and studying current research in special education. Sheehan will then lead a group of special education professionals to Panama, providing advanced training to the orphanage staff.

More About the Retirement Celebration

Arden Lee, friend of TMCC and scholarship donor, was happy to attend Dr. Sheehan’s retirement celebration. Before the event, she chatted with other attendees about her rapport with Sheehan and her dedication to students.

“Paula Lee Hobson, Maria Sheehan and I would go to our favorite lunch restaurant, and we talked about scholarships and what was happening at TMCC,” Lee said. “In October, I attended the Legacy Scholarship Reception; I have in the past, and met the student who received a scholarship in my name. She is a dental hygiene major.”

Gretchen Alt Sawyer, Executive Director of the TMCC Foundation, gave introductory remarks at the celebratory reception. She listed Sheehan’s many financial contributions to the college.

“Dr. Sheehan has just made a generous donation to the nursing program in the name of her mother; an endowment, which will continue for future students,” Sawyer said. “Dr. Sheehan’s mother was a registered nurse.”

Paula Lee Hobson, former Executive Director of the TMCC Foundation, thanked Sheehan for her mentorship, and Barbara Buchanan, Vice President of Academic Affairs spoke about her esteem for Sheehan as a leader and colleague.

Following the film presentation, Dan Klaich, Chancellor of the Nevada System of Higher Education, took the podium, praising Sheehan’s guidance of TMCC through tough economic times of the Recession, and Kevin Melcher, NSHE Regent, District 8, thanked Sheehan for her untiring work as a Rotarian.

Pat Slavin spoke next. Slavin worked at TMCC for 37 years and retired as Chief of Staff. She admires the three great Ds of Maria Sheehan – “dedication, discipline and determination.”

An important announcement was made by Brad Woodring, President of the TMCC Foundation Board of Directors, and Vice President of First American Title Insurance Co. The Foundation is donating $1,000 to the orphanage for special needs children in Panama for which Dr. Sheehan is raising money, Casa Providencia of Heart’s Cry Children’s Ministry.

Dr. Sheehan expressed her thanks to the Foundation and everyone gathered at the reception.

“It’s not about what I’ve done in my career and at TMCC, it’s what the team has done – and the TMCC team is doing wonderful things,” she said.

Sheehan gave the second half of her speech with voice and American Sign Language. She focused on cooperation and teamwork.

“Thank you all for the opportunity to serve,” she said.

During the celebration, faculty and TMCC Performing Arts students in costume mingled with guests. Students presented several Central American-themed songs and dances, including "Conga", "Sway", and "Come On-A My House."

“We wanted Dr. Sheehan to know that the children in Panama that she is helping will ‘Never Walk Alone’ because she is there volunteering her time and effort,” Wray said.

Many at the celebration expressed on stage or during the reception, “Dr. Sheehan, we will miss you.”