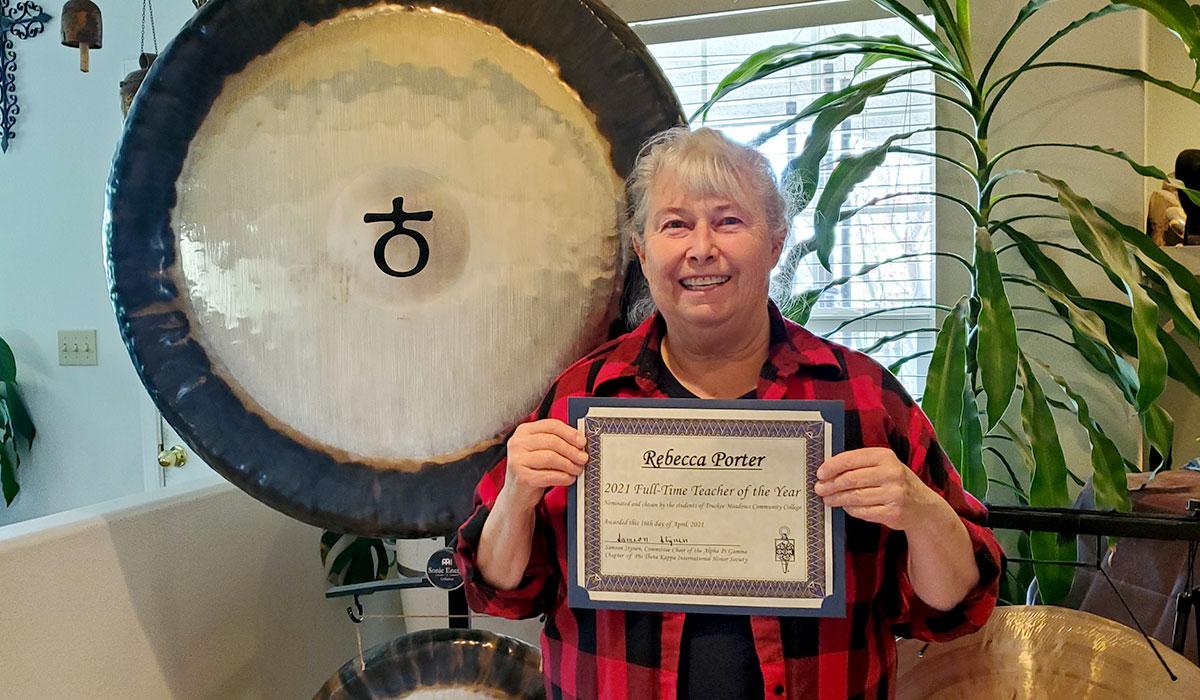 It was 1983 and Rebecca Porter was on a camping trip with her daughter outside of Markleeville, California when she received the news that would launch her career as a lifelong educator at TMCC. “I thought I would teach high school,” Porter explained, but life took her in another direction. Instead, she continued her education, eventually earning a Master’s degree in mathematics while working as a lecturer at the University of Nevada, Reno.

Little did she know that her work in the classroom was getting noticed by other educators in the community, most notably by another TMCC math instructor, Bill Newhall. “I was sitting in the UNR cafeteria between classes and Bill came up to me,” Porter remembered. “I didn’t know him, and he asked me if I was Rebecca Porter, and when I told him I was, he told me that I had to apply for a teaching job at TMCC.”

In August of 1983, Porter took a call at a payphone to learn she’d landed a teaching job that she would hold for nearly forty years. “I worked in the Red Mountain Building and then in the Vista Building next to Bill for 37 years,” she said. “Bill has always been my mentor and he is the reason I ended up here.”

In the years since, Porter has taught nearly every math class offered at TMCC with one goal in mind: student success. “My role has always been to help students build confidence in mathematics. It’s small steps... if I can help them realize that they can be successful and to turn off that little voice in their head that tells them that they aren’t ‘good’ at math it makes a huge difference in their lives,” she said. “My role is to help them to be successful in whatever career they choose... and especially to recognize the beauty of math. Math is everywhere, especially in the patterns we see in the world, and in our own lives.”

Mathematics is one of four passions that define the way Porter experiences the world and approaches her work in the classroom. One is, of course, math. The others—writing, music and caring for animals—complement the work of an educator who helps students not only to see the relevance of a particular class, but how they can apply lessons to their lives well beyond campus spaces.

“I always recognize patterns—how math articulates itself in our world—and the beauty of symmetry. It’s like the beauty of a sunflower, which is explained by the Fibonacci numbers,” she said, citing mathematician Leonardo Fibonacci who developed a sequence based on adding the previous two numbers of the sequence to come up with the next in the series. Fibonacci numbers explain the kind of spiraling patterns present in the middle of sunflowers and pinecones, to name two examples that occur in nature.

Math also explains the patterns present in music, a topic Porter explored during a sabbatical she took in 2017, and a topic she often brings into her classroom. Yet, the connection between math and music was what brought her to mathematics in the first place. A longtime musician, Porter plays the piano, violin and guitar.

Although the ongoing pandemic has reduced the opportunity to perform, Porter has also played vibrational healing music in the community using Tibetan bowls, crystal bowls, and drums. The vibrations, measured in sine waves, are again artifacts of the unique way that math can articulate the deeper reality of what we experience.

“Mathematics is a symbolic system that we use to describe, explore and communicate in our world. Truly, it’s a universal language and I always tell my students that it’s a language we all must speak. We live in a world with patterns. There exists no system more powerful for understanding our world than that. No matter what a student majors in, math keeps us balanced and trains our brains to solve problems, and it is a discipline that serves us in every aspect of our lives.”

TMCC Over the Years

Although the subject Porter teaches changes very little, TMCC looks different than it did in 1983. In those days, every faculty attended the Faculty Senate meetings and would take their turn as “secretary”—taking notes—since there were no administrative assistants to fill that role.

The Dandini Campus was also much smaller than it is today. “When I was hired, we had just the little Red Mountain Building with no add-ons,” Porter remembered, noting that she and the other math instructors were housed in a corner of the building with the business division.

“In our little area, I remember we had a break room with a coffee pot and a small TV. All the instructors at that end of the building would congregate in the break room at noon to watch All My Children together because none of us had a class at noon, at least that I can remember,” she said.

Technology, too, evolved over the course of Porter’s teaching career. “When I first started teaching, [all we had] was chalkboard, pencil and paper. Everything students turned in was on pencil and paper. There were no calculators,” she said. By her second year teaching at TMCC, graphing calculators were starting to be used for engineering calculus classes, and Porter spent the summer months before the fall semester learning this new technology.

As more advanced mathematics classes were added to the schedule, updates in technology changed the way students learned math—especially how they engaged with the material. “There was a huge change in the department because of the new technology. We had computer labs suddenly where the students would work on their math with computer-based systems to help them understand the subject and visualize it better. Then all the homework-based systems came on and are still here, like My Math Lab and WebAssign.”

Although technology changed, Porter’s attention to her student’s well-being and progress in her courses remains the same. “It’s the students and their particular collection of personalities that make a class one that you will never forget,” she said, citing numerous examples of students asking her if she remembered them from semesters past.

This attention to the composition of her classes continued even in the time of COVID-19 and remote learning. “I was amazed that I was able to connect with my students, but somehow I did,” she said, remembering that she did not force students to turn on their cameras for the Zoom sessions, knowing that the pandemic had the potential to impact students in ways that they may not have wanted to share with their classmates or with their instructor.

“My students wrote to me and told me they were grateful for that,” she said. “They were under enough stress they did not need me coming into their homes and forcing them to show me what was going on there. We may never know what is going on in our students’ lives.”

Yet, that was the year Porter received the Phi Theta Kappa Teacher of the Year—38 years after she started teaching at TMCC. “I had been nominated countless times before...but I had never received so many emails from students before saying ‘you’re doing a really good job, thank you.’ Or ‘keep going, you’ve made a difference in my life.’”

These messages, coupled with learning that she taught a current students’ mother or even grandmother, or encouraged a student to continue their education in math (she remembers one student who eventually earned her Ph.D. in math) are all reasons Porter continues to find inspiration in her role as an educator.

“After teaching for so many years, those are the moments you live for, and if you ever feel down, that’s what you focus on,” she said.

While the face of the Dandini Campus—and TMCC as a whole—has certainly changed since 1983 when she began her career as a full-time instructor, Porter sees value in the institution’s ongoing dedication to serving the community.

“When I was hired, it was our mission to serve the community. We value students and we never treat them as a number. We recognize students could have families and jobs, and that going to school is both difficult and brave, and so we do what we can to support them,” she said.

Porter continues to support her students by showing them the beauty and applicability of mathematics and the way that it can open doors not only in one’s academic and professional career, but to a new way of seeing the world.

“It’s a joy to share the beauty and power of math with my students,” she said.

For more information about studying mathematics at TMCC, contact the department at 775-673-7181.