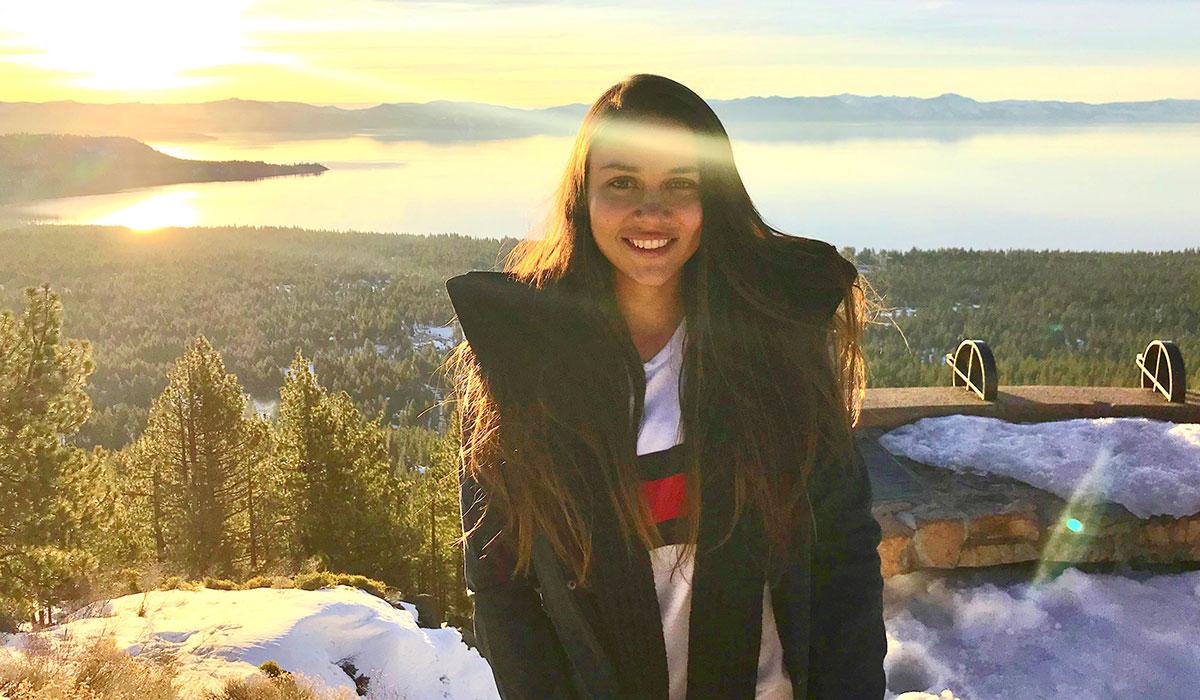 I think the biggest lesson that I’ve learned is to enjoy every step of the process; it’s so easy to get caught up in the everyday routine, but I have learned to pause and remember that I am living my childhood dream. I also think that it’s important to be humble and to acknowledge that there is always something to learn from others around you. I wouldn’t have had such a great experience if I hadn’t had the relationships that I built at TMCC with faculty, staff and friends… TMCC feels like home and I am so grateful for the past two years, I will definitely miss everyone!

Valeria Saborio is graduating with her associate degree in engineering this semester, yet her journey at TMCC began a year and a half ago when she earned a competitive scholarship that enabled her to live a lifelong dream. An international student originally from Costa Rica, Saborio served as Vice President of the Student Government Association, where she created a scholarship program for DACA students called the “Green Door Scholarship.” She also served as a Peer Mentor for TMCC’s International Student Services Department, helping other international students to transition and succeed in their education in the United States.

And yet, getting a college education in the United States—a dream Saborio held close since watching the movie High School Musical 3 back when she lived in Costa Rica—wasn’t something she believed was in her reach.

“I always wanted to come to the United States, but my parents divorced when I was eleven and our financial situation changed. So, it was a dream I put away because I needed to help provide for my family. Coming to the U.S. and paying thousands of dollars wasn’t an option,” she said. That was a circumstance that led Saborio to realize one of many dreams.

A talkative child, Saborio assumed that her future education and career would involve language and communication. “Even though I have a hearing loss, my parents encouraged me to pursue a career in communication, so I was planning to study international affairs,” she said. And yet, watching her brothers play with toys like legos and enjoying math and science classes, Saborio started to wonder if there was something she was missing out on.

It wasn’t until she transferred to a high school which also offered her the opportunity to earn an associate’s degree that new opportunities began to surface. “I chose to pursue an associate degree in business, but I started hanging out with the computer networking students,” she remembered. In her junior year, she was invited to participate in a hackathon because of her advanced English skills. The experience was transformative.

“That was my first experience prototyping, creating, and designing a solution, which is basically what engineering is. I felt like I had discovered a new world where I could use that creativity to come up with solutions to real problems,” she said. “I thought it was the coolest thing…[and] that’s when I decided I wanted to become an engineer.”

From there, Saborio participated in several different engineering projects. One project—completed under the purveyance of a university in Costa Rica—involved the creation of an alarm device for those who are deaf.

“My younger brother is completely deaf,” she explained. “Even though he has a cochlear implant, when he wakes up he’s not wearing his implant, and so he can’t hear his alarms. He’s always depended on my mother or me to wake him up.” Saborio wondered: when he moves out, what’s going to happen?  This led her to prototype a thin alarm pad that would rest under a person’s pillow in bed that could be programmed to have augmented vibrations.  The device could be programmed using a smartphone and was informed by research on the best methods by which people are woken from sleep.

“That’s when it really hit me—I could really help people as an engineer,” she said. Further research into the profession led her to discover several engineers who’ve made distinct differences in the world, such as Ada Lovelace, Alan Turing, Grace Hopper, Margaret Hamilton and Gordon Moore. “I just felt like I was discovering this whole new world of opportunity,” she said.

Coming to the United States

After Saborio graduated from high school, she began working for Amazon Alexa, doing artificial intelligence coding for their device in Portuguese. She planned to continue her education in Costa Rica when, after logging into Facebook, she came across a scholarship opportunity offered by the U.S. Embassy in Costa Rica. Successful applicants would receive a $50,000 scholarship to pursue a STEM field in the U.S. at a community college. She decided to give it a shot.

The application process for the nation-wide scholarship was two months long and highly competitive. Only five students out of thousands of applicants would be awarded. When the call came, Saborio knew a dream was coming true. “I called my mom crying,” she said. “I had $50,000 to come to the U.S. to study engineering. All of a sudden to have all these resources to pursue a dream of mine… I was so thankful.”

At first, Saborio had planned on attending a community college in Seattle. “They had a really cool industrial engineering program, and at the time, I was working for Amazon so I thought it would be a good fit to be in Seattle where Amazon is located.” However, when she began to research other options, she paused at the images that illuminated her screen when she did a Google image search for  “Truckee Meadows Community College.”

“When I was little, my parents used to do dream boards with me,” she explained. “We would cut things out that we’d like to go or to do. And I cut out a picture of Lake Tahoe that I just fell in love with. I thought it was such a beautiful place and it gave me so much peace.” Among the images that surfaced in the Google search was one of Lake Tahoe that was remarkably similar to her dream board picture. “So, I picked TMCC because, in part, of that picture on my dream board,” she said.

Saborio’s favorite classes at TMCC have been many: Calculus, Differential Equations, Chemistry, and Engineering. She is also a regular participant in Kurt Ehlers’ “Math League” program, which examines unique applications of math to various scenarios in the physical and engineering world. Although engineering is certainly a challenging degree program, Saborio said that her most difficult moment occurred when she decided to take a statics class during a three-week mini session at UNR this past summer.

“I needed the class to graduate, and because engineering is such a [sequential] major, I had to take that class in the summer,” she explained. “But to this day, I’m still a little traumatized from that class, which was three weeks of super-intense calculus and physics to calculate the forces on bridges, trusses and other structures. Everything was online, and the typical 16-week semester was condensed into only three weeks.”

Although she cautions other students to think twice before committing themselves to such a dense class in a mini-format, the class nonetheless enabled Saborio to complete her degree program in under two years.

Following graduation from TMCC, she sees herself working toward her goals of applying to internships and transferring to a 4-year university to continue her education in mechanical engineering. It’s a degree that will allow her to land a career developing hearing aid technology, in language artificial intelligence, or in aerospace, developing technology to make a speedier trip to Mars possible. Eventually, she sees herself pursuing a Master’s degree in management engineering so she can take the lead on her own engineering projects.

“There is a saying in Spanish, that you ‘add your own grain of sand,’ which means to make your contribution to the world. And that is what I’m going to do,” she said.

Her inspiration comes, in part, from her uncle Franklin Chang Diaz who became an astronaut for NASA despite some humble beginnings: as Saborio tells the story, he came to the U.S. in 1968 with $50 in his pocket and not a word of spoken English. Yet, he became one of two U.S astronauts who completed over 1600 hours in space across seven missions.

“He is a huge inspiration to me, and everyone in Costa Rica is so proud of him. Every time I struggle with a class, I just think of him. He always says ‘failure is a requirement for success’, and so there have been times when I failed an exam horribly, and I think of him, and it inspires me to keep going.”

Saborio’s time at TMCC left her with three life-lessons that she will carry in the next leg of her academic and professional journey. “You’ve got to enjoy every step of the process; it’s so easy to get caught up in the go, go, go and always running around… but sometimes I had to literally make myself pause and remember that I am living the dream that I have always wanted to do since those days of watching High School Musical 3,” she said. “Remembering that has given me a new vision, especially in engineering classes where there is always a right and a wrong answer. That’s always stressed me out, so I remind myself to enjoy the process.”

She also encourages students to approach their education with humility. “It’s important to acknowledge that there is always something to learn from somebody, and approaching your classes with a humble spirit can help you to learn from others around you,” she said.

Finally, building relationships with fellow students, faculty, and staff can help to make a college campus feel like home. “I wouldn’t have had such a great experience at TMCC if I hadn’t had the relationships I built with faculty, staff and friends. TMCC has always felt like home.”

For more information about studying engineering at TMCC, contact the Physical Sciences Department at 775-673-7183.