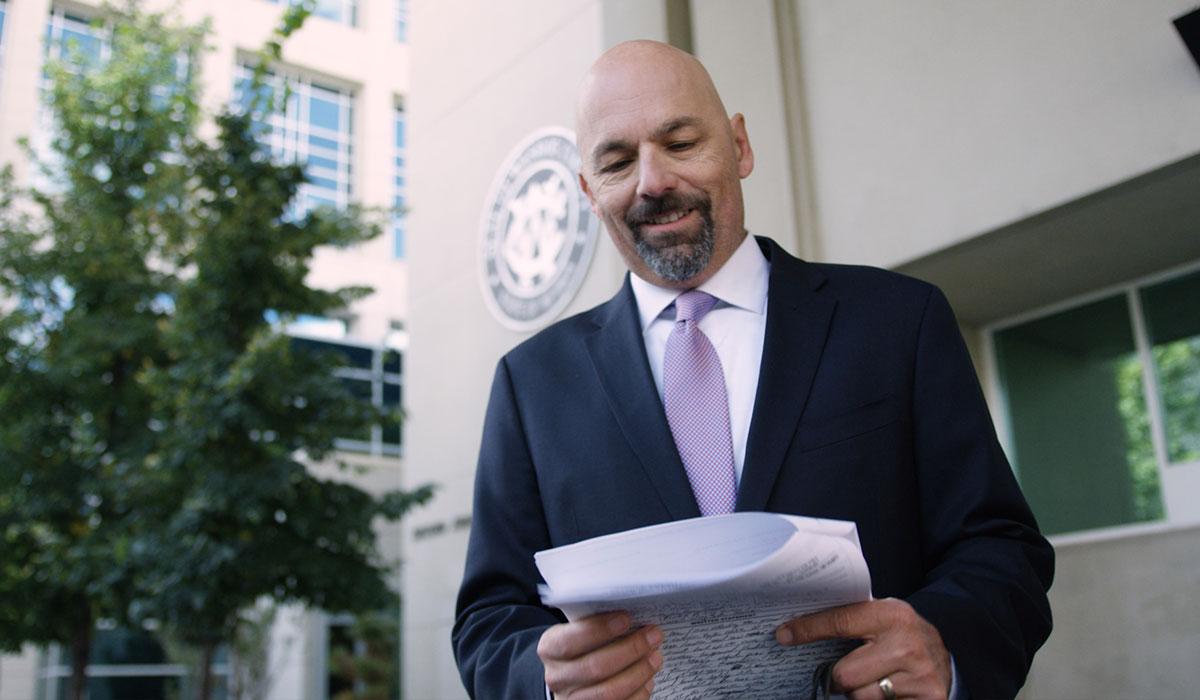 Since 1998, Henry Sotelo has walked into a classroom at TMCC to teach in the Paralegal Program immediately following his other day job: serving as an active legal professional in the community. Sotelo is a practicing criminal law trial lawyer in private practice in Northern Nevada, a court appointed legal defender in Reno Municipal Court, as well as a specialty court lawyer, and offers Pro Bono work at the Domestic Violence Resource Center. He also serves on the Washoe Regional Behavioral Health Policy Board, and has received a two-year appointment to the Reno Human Rights Commission. Add that to his work as an educator, and suffice to say that Sotelo’s work is to advocate and to create opportunities for others to make positive changes in their lives.

Although he began teaching at TMCC as a part-time instructor, Sotelo was promoted to be the Program Coordinator—a position he’s held for sixteen years. Teaching, he said, has helped him to become a better lawyer, and practicing law enables him to provide students with unique insights into the legal profession.

“I absolutely see the benefit overlapping teaching and my law practice,” he said. “I get to communicate and educate based on firsthand knowledge. I am basically walking into every class session directly from Court. I can incorporate what I am seeing and practicing in Court directly to my students.”

Yet, a career as a legal professional wasn’t initially in Sotelo’s sights. “I thought I was a different person [in college]… that I was more introverted,” he said. A journalism major, Sotelo appreciated the need for research and honed writing skills that the career field offered.

On a whim, Sotelo took a law class that involved participation in a mock trial. “It triggered something in me that made me think that the law was very interesting. I was like, ‘wow, this could be really fun and dynamic,’ especially the advocacy aspect of it,” he said. This active advocacy made Sotelo question his academic journey. “When you write, you feel good about putting that out into the world and having people learn from the knowledge you acquired. But, the adversarial dynamic of the law was exciting to me as someone who values human contact and communication.”

Sotelo began researching law schools and what lawyers actually did, and his life changed course. Through a job opportunity as a prosecutor for the Washoe County District Attorney’s Office, he learned how to advocate for public safety. However, it was his experience as a defense attorney that opened Sotelo’s eyes to the fact that the law is one thing, but people’s lives—the mistakes they make—are often the result of a complicated web of factors comprised of socio-economic status, education, past trauma and circumstance.

“You don’t get to talk to the defendants as a prosecutor, but as a defense attorney, you start to see them as human beings—as someone who has many layers, and is more than the crime they committed. It’s not easy because sometimes you get clients who are bad people who did bad things. You might not get along with them, you may not like them, but you want to help them because of the situation,” he said.

This is where, for Sotelo, the law becomes interesting: when a lawyer becomes an advocate and negotiator. It’s knowing that the letter of the law is just as important as knowing not only what to communicate, but also how to communicate to the prosecutor, judge and jury.  “It’s not just a job,” he said. “You’re working with people’s problems and you’re working to solve them. You have to be aware of the humanity and the foibles and how people have strengths and weaknesses, and you have to be willing to be involved in these complicated lives. For all these reasons, it’s not just a job. It’s a calling.”

Sotelo also serves on several of specialty (or problem-solving) courts. These weren’t a part of the judicial or legal landscape until 1989 when Miami-Dade County in Florida recognized that there was a need for a different solution to the drug problem. The conventional method of trying those convicted of possession—followed by punishment through a jail sentence—wasn’t working.  Instead, this approach created a “revolving door” into which offenders perpetually entered and exited the criminal justice system without addressing the problem that was causing them to break the law in the first place.  This is where the idea of the specialty court—particularly Drug Courts—came from.

“Crime is not committed only by evil people,” said Sotelo. “Instead, it’s committed by people who are in bad circumstances. That doesn’t mean they are blameless for the decisions they’ve made, but these decisions are often based on their [poor] situations.”

So, instead of pairing a misdemeanor offense with a jail sentence or a fine, specialty courts impose a strict schedule and requirements upon their clients.  Some of these requirements include: participation over 12-18 months to establish and maintain long-term recovery strategies, frequent and random drug tests, clinical treatment for substance use disorders, individualized case management services and connecting participants various resources within the community.

In 2019, with the passage of the Criminal Justice Reform Bill, states have been encouraged to fund alternatives to traditional pathways into the criminal justice system; this has proliferated the number of these courts, which include Drug Courts, Mental Health Courts, Veteran’s Courts, among others. According to the Bureau of Justice Statistics which conducted a census of problem-solving courts in 2012, there were 3,052 courts in the United States that year, and today all 50 states have Drug Courts as well as an assortment of other specialty courts.

Sotelo serves on three specialty courts in Reno Municipal Courts:  DUI Court, Veteran’s Court and the Community Court that sees cases for “status” or “lifestyle” offenders (think: those who have open containers in public, who sleep in the parks and who trespass.) “Specialty courts are there to give people the education, the knowledge, the tools over a long period of time, so that when they complete the specialty court program, they will have the skills to live the rest of their lives without having to rely on substance abuse or unlawful behaviors for the stressors that come up in life. This way, we can change the trajectory of their lives,” said Sotelo.

These various courts offer specialized services—and specialized attention—for specific populations of misdemeanor offenders. For example, Reno’s Veteran’s Court—the only court of its kind in Northern Nevada—received formalized training, connects participating veterans with therapists, helps to subsidize the required drug and alcohol testing and to connect them to other resources in the community while clients learn healthy coping skills to lead productive lives.

“My work with specialty courts has given me the opportunity to do my part in Criminal Justice Reform. I think the time period we are in now is fertile ground for making some changes that can benefit the individual specifically, and society in general,” he said.

TMCC’s Paralegal Program is the only American Bar Association approved program in Nevada and offers students unique insights into a career steeped in legal processes as much as it is about learning effective communication skills. “In my classes, I give my students some knowledge, but I also incite in them a passion for the idea of what we’re doing,” said Sotelo. “If students want to work in this field, they will encounter people who truly need their help. People who will say ‘Help me the best you can—I don’t want to lose my job or my kids, and I don’t want to go to prison.’ So I tell my students: you learn the information, but it’s more than just information and the law.”

According to Sotelo, there are three elements that every prospective paralegal student—or students looking to go to law school—should keep in mind: research, analysis and communication. “So basically, it’s research—learning the law and learning how to find the law. With analysis, you have to understand the law yourself. And then, you have to be able to communicate that understanding to your client or other lawyers—whomever you’re advocating to. If you learn those three skills, you will know more than 90% of the people out there, except for lawyers,” he said.

The key for success in this career is a solid set of interpersonal and communication skills. Because paralegals function as the segway between the client and the lawyer, they are on the “front lines” of every case. They may not be advocating in front of a judge, and they cannot offer any legal advice, yet they nonetheless provide a line of communication to clients by explaining the legal process and how particular processes typically unfold. “This is why paralegals are so valuable and why in the last 25-30 years has gone from ‘what’s a paralegal?’ to ‘we want more than one paralegal in our office,’” Sotelo said.

No matter what career a student wants to pursue, Sotelo insists that students understand that mastering a profession requires time. “There are no shortcuts, and you won’t have the skills at first. You have to understand that acquiring knowledge is a process,” he said. And yet, the rewards of honing and developing one’s professional skills are myriad.

Giving Back to the Community

In addition to helping students succeed in finding a profession that they enjoy—many of Sotelo’s students have become practicing lawyers—Sotelo advocates for our community through his work with the Reno Human Rights Commission. Through his appointment to the commission, Sotelo has helped to create a streamlined process by which property owners can remove racially restrictive language from their property deeds and trusts. He also assisted in the creation of recommendations that led to the Reno City Council establishing Indigenous People’s Day on the former Columbus Day holiday.

Sharing these experiences with others—especially in the classroom—is something Sotelo finds deeply rewarding. “I love teaching law to people because it empowers them,” he said. “Once folks learn how to access, analyze and communicate the law, they are empowered. This country is built on the rule of law. I truly believe that all people should have this skill and knowledge.” And that, perhaps, is key: it’s not just research or analysis or communication: but, like Sotelo, using your knowledge and skills to make the world a better place.