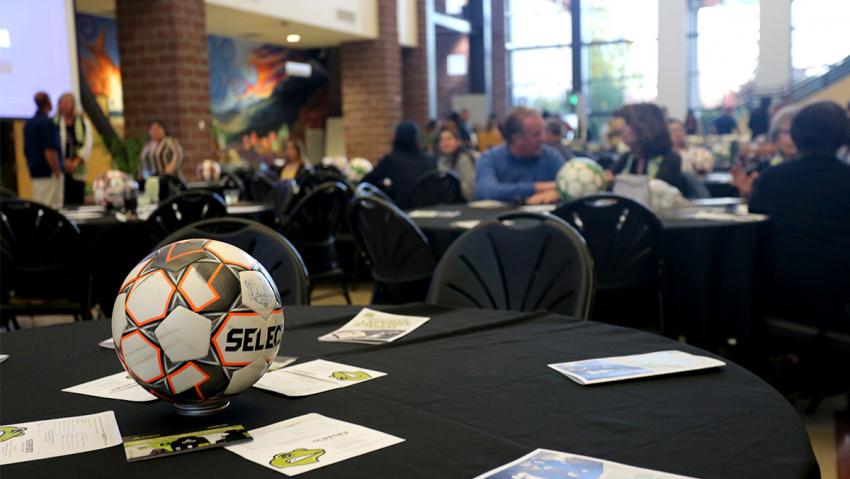 Henry Travland and Rebecca A. Eckland

On Monday, Oct. 21, TMCC once again made history by hosting the first athletics banquet in celebration of the inaugural TMCC soccer season.  With a few hundred guests in attendance, administrators, faculty, players, and coaches shared their thoughts, memories and praises from the 2019 soccer season.  Additionally, each student-athlete was recognized for their important contribution to the Athletics Program, and awards were given for specific instances of excellence.

The season, which began on July 29, required that each student-athlete adjusted to college life, became acclimated to taking college courses while balancing practices, traveling to and from games and, of course, competing in the matches themselves.

“TMCC athletics has taught me not only the importance of what it means to be a student-athlete, but it has also introduced me to a new world of commitments, accomplishments, and failures,” said Shelby Shaffer, who served as Team Captain to the women’s squad. “No matter the outcome of the game, I was surrounded by amazing people on and off the field. I am grateful for the places we got to see, and for the friendships we made... I think it’s safe to say between the two teams that we had fun. I hope everyone is excited for what is yet to come.”

TMCC President Dr. Karin Hilgersom and Vice President of Student Services and Diversity Estela Gutierrez would emphasize the success of the men’s and women’s teams and extended her recognition to the families in attendance. “You have supported your student-athlete, you have attended games to cheer us on, and we are grateful for you,” said Gutierrez.

To honor the accomplishments of every athlete, a representative from the office of United States Senator Catherine Cortez Masto, Kerry Anne Durmick, presented each athlete with a certificate of recognition. Each also received a commemorative white jersey.

“Being a part of college athletics is truly a learning experience and life lessons are learned daily. I hope you have grown this season as students and as athletes, and I can’t wait to see how much more you grow as people after two years here at TMCC,” said Athletic Director Dr. Tina Ruff, who would also recognize the contributions of TMCC staff who made the Athletics program possible, most notably Arkaitz Aldecoaotalora, Tara Connolly and Andy Hughes who formed the compliance and eligibility team. “[They are] my circle of support and guidance,” said Ruff. “They are on the front lines, working to make this program possible.”

Director Tina Ruff, along with the coaching staff, also implemented a new award that would recognize excellent sportsmanship and quality of character of one athlete. The Mighty Lizard Award was given to Forward Daisy De La Torre Jimenez. “This is a separate award for one student-athlete who stepped it up,” said Ruff. “This athlete went to all the games, and she did everything we asked her to do.”

Team Captains from each squad also offered thanks to those in attendance. “Thank you to Tina Ruff who has been encouraging us throughout the season, your support has been vital,” said Team Captain Arturo Carrasco Jr. of the men’s team. “And lastly I’d like to say thank you... to each of my teammates. I will have each of your backs both on and off the field. Vamos Verdes!”

We’d like to thank everyone who supported the Truckee Meadows Lizards in their inaugural campaign. We will be sure to keep you updated with news surrounding the program during the offseason!

For more information about TMCC Athletics, contact the department at 775-673-7135. 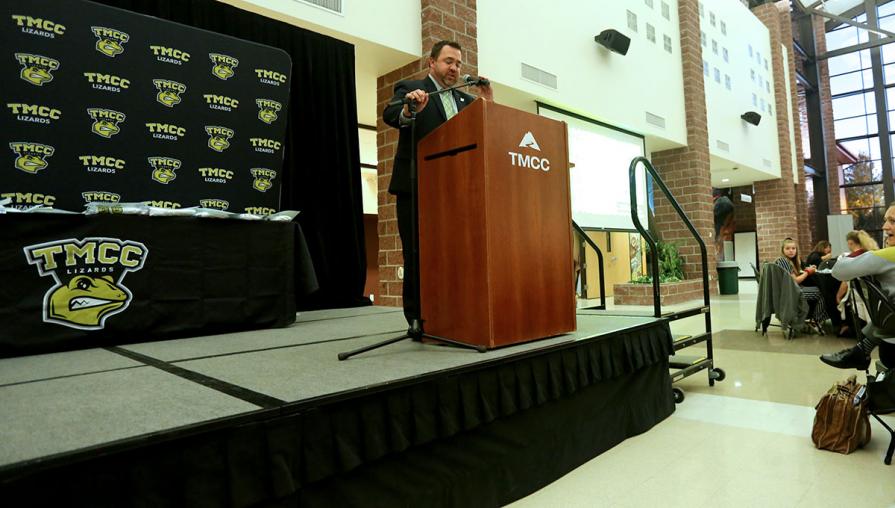 NSHE Vice Chancellor Nate Mackinnon acted as the emcee for the event. 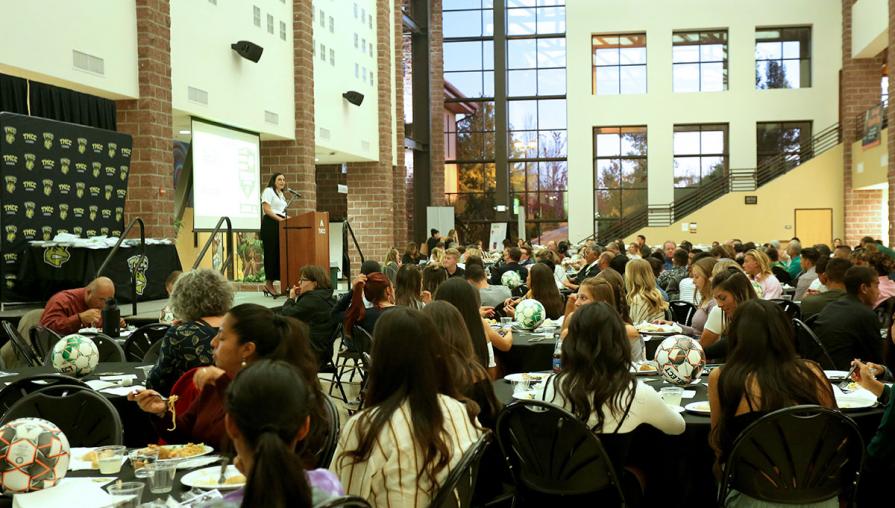 TMCC President Dr. Karin Hilgersom thanks student-athletes and their families for support of the athletics program in its inaugural season. 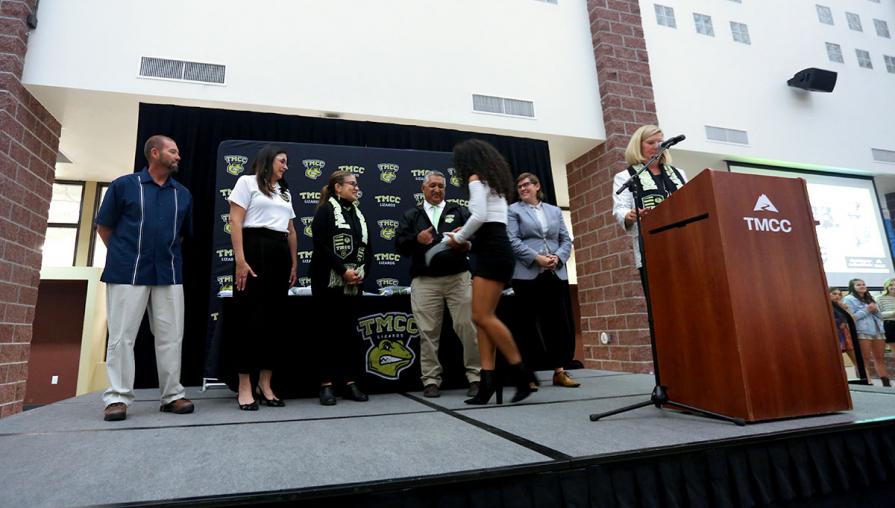 Athletes accepted a certificate and white jersey in observance of their successful first season. 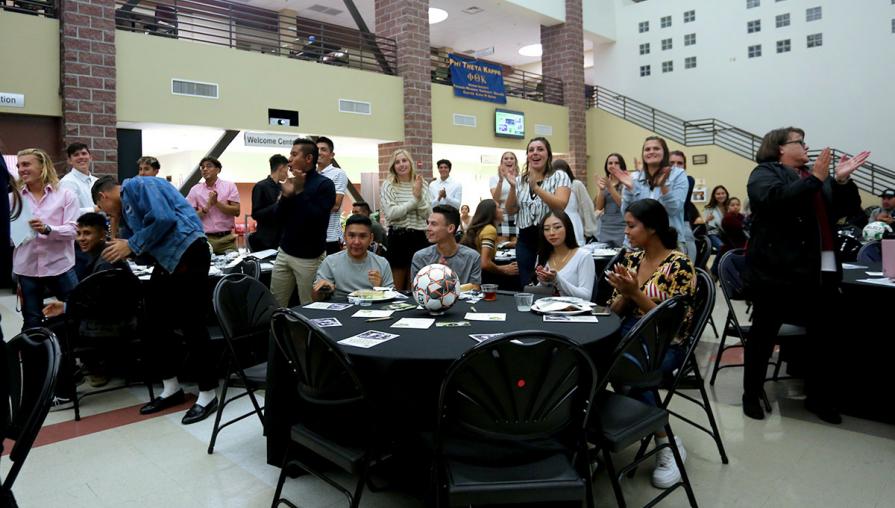 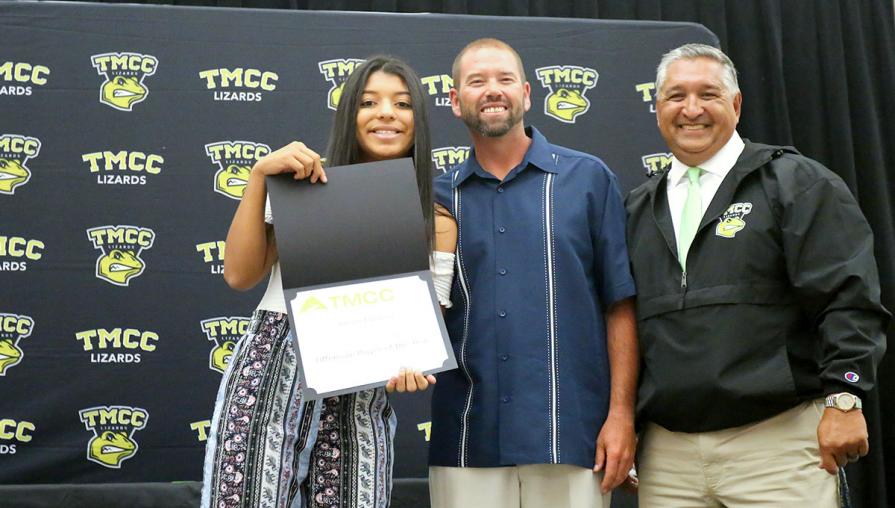 Yalison Espinoza received the Offensive Player of the Year award for the women’s team. 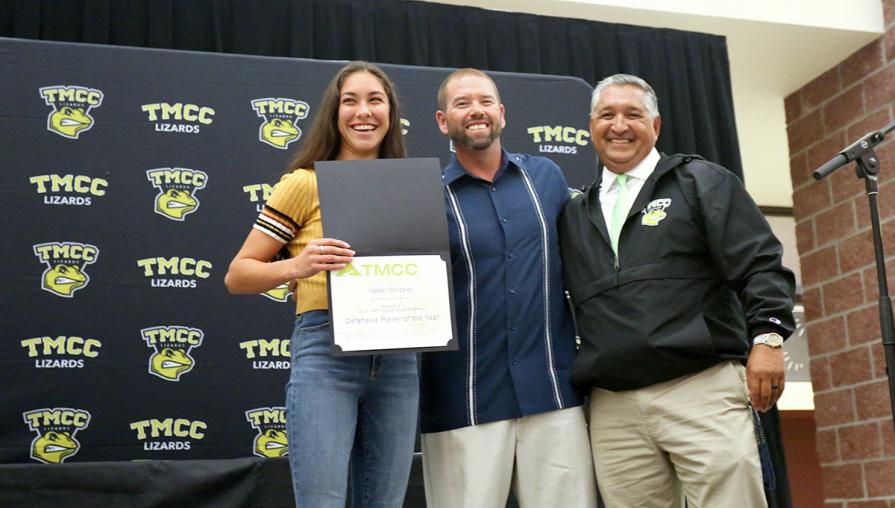 Isabel Gonzalez received the Defensive Player of the Year award for the women’s team. 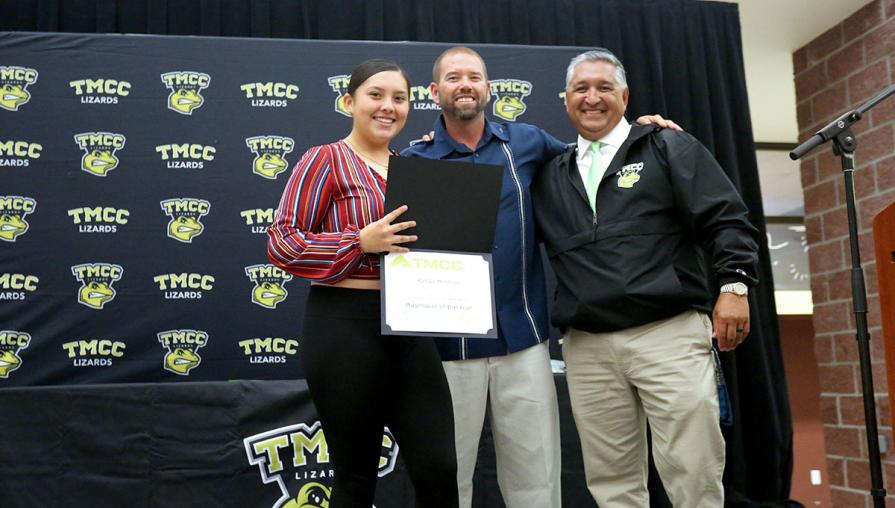 Kaitlyn Mendoza received the Playmaker of the Year award for the women’s team. 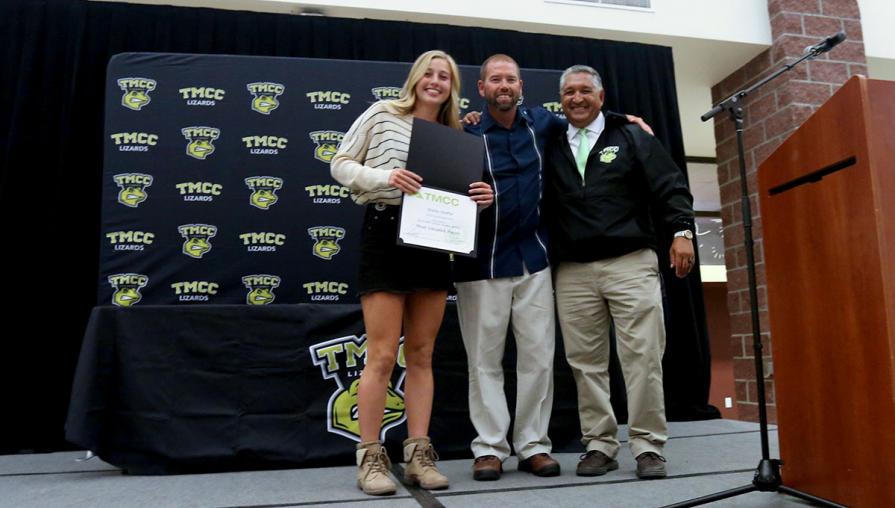 Shelby Shaffer received the Most Valuable Player award for the women’s team. 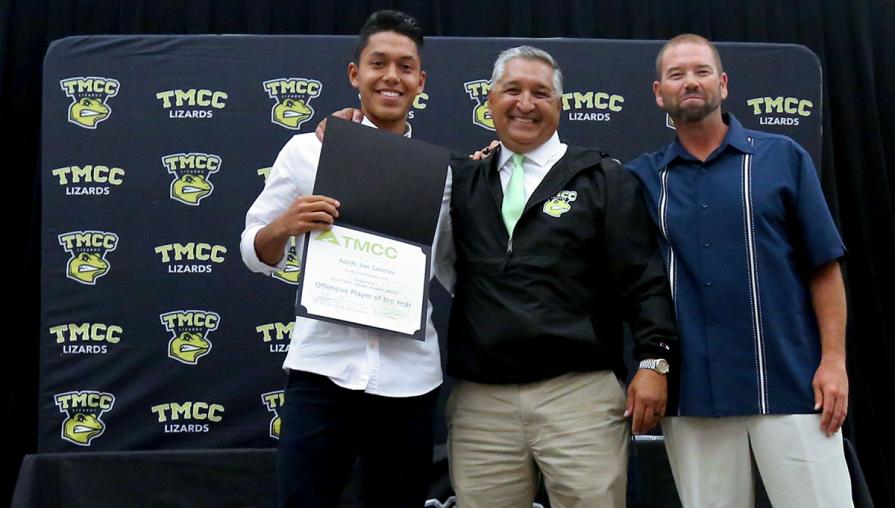 Joel Sanchez received the Offensive Player of the Year award for the men’s team. 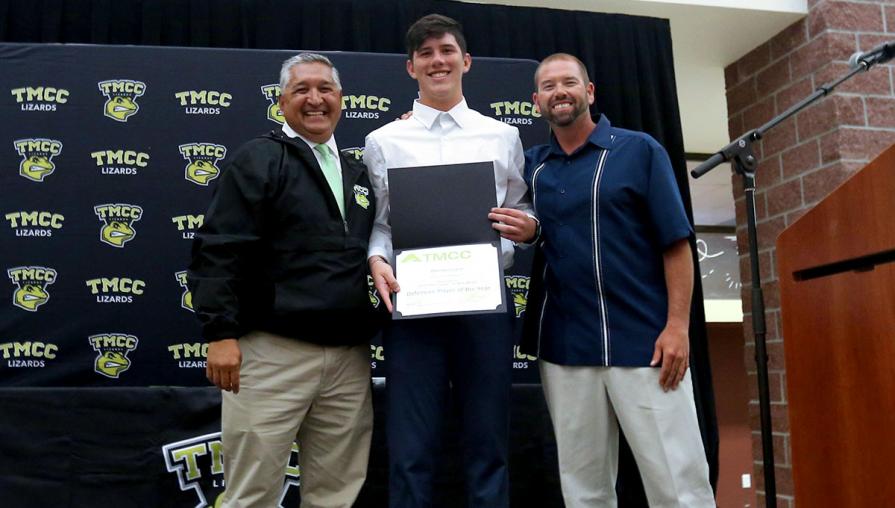 Brendin Lane received the Defensive Player of the Year award for the men’s team. 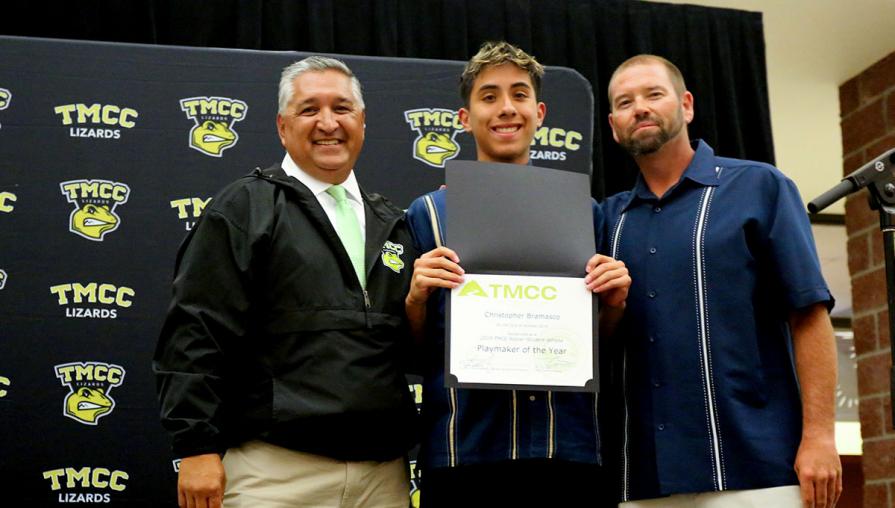 Christopher Bramsco received the Playmaker of the Year award for the men’s team. 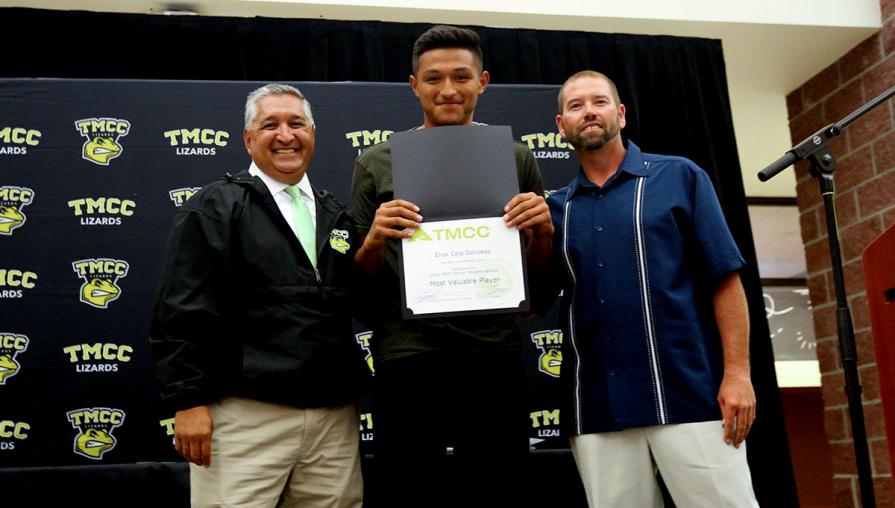 Erick Ceja Gonzalez received the Most Valuable Player of the Year award for the men’s team. 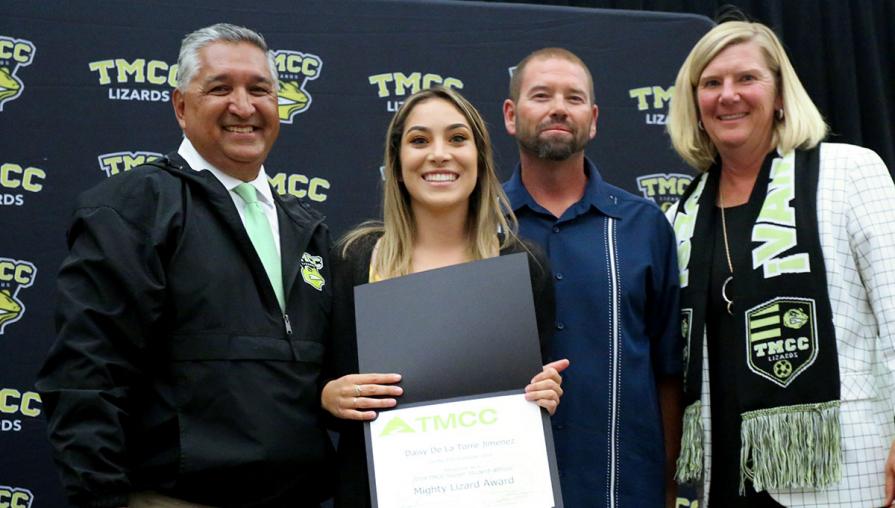 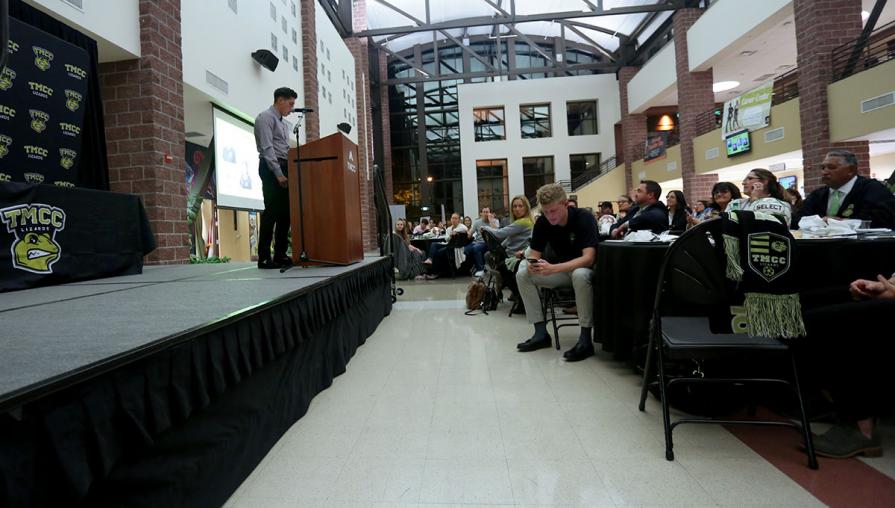 Men’s Team Captain Arturo Carrasco Jr. offered his reflections of the 2019 season, which included offering thanks to TMCC, its staff and his teammates. 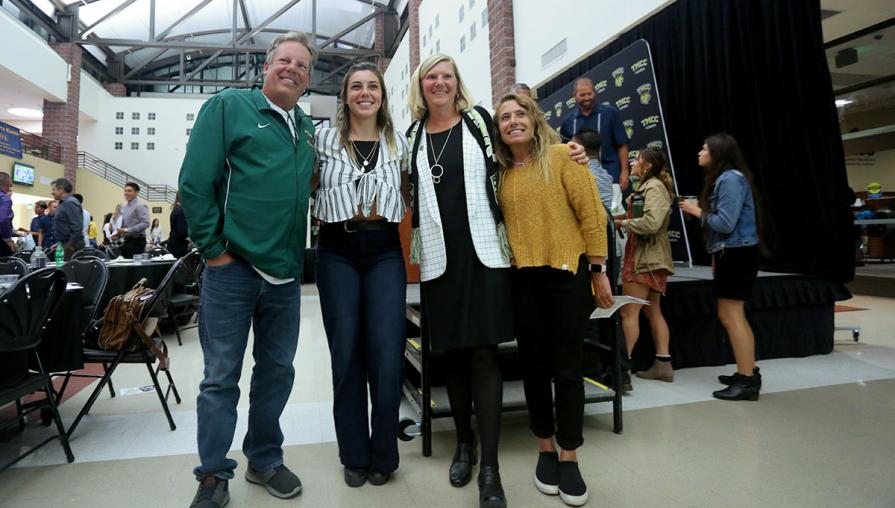 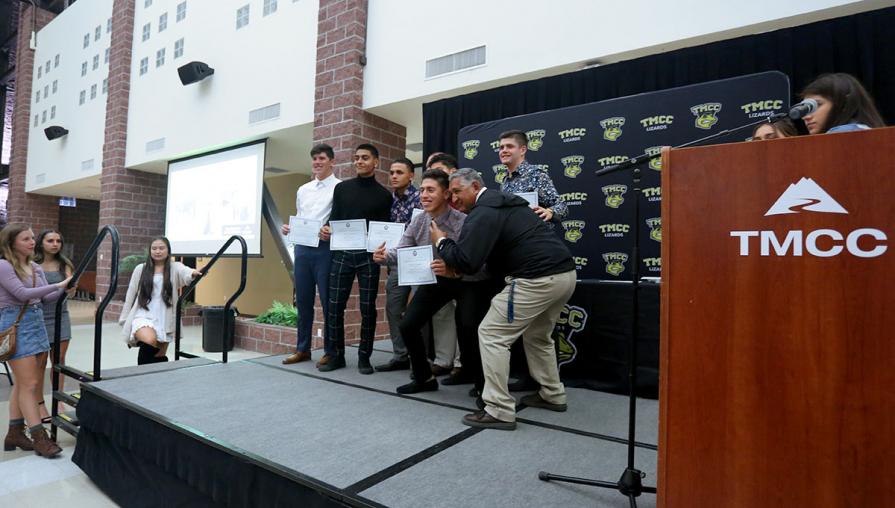 Members of the men’s soccer team with Coach Gonzalo Lopez. 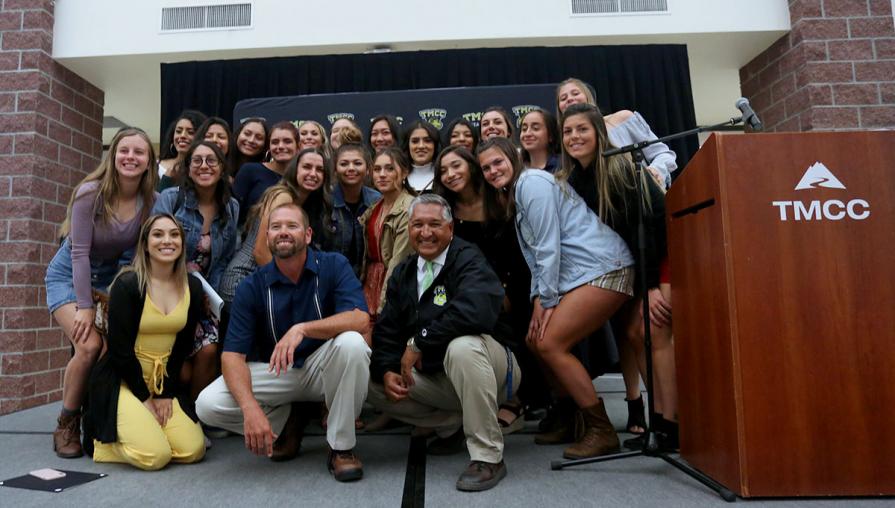 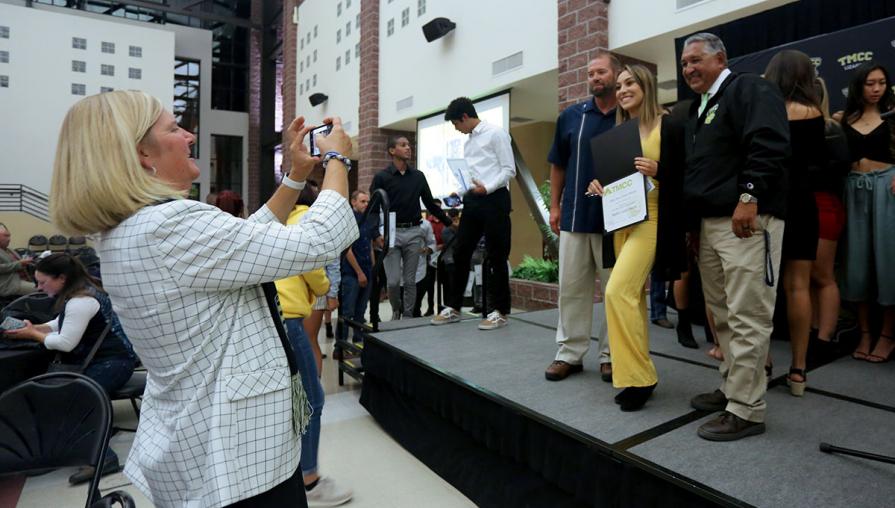 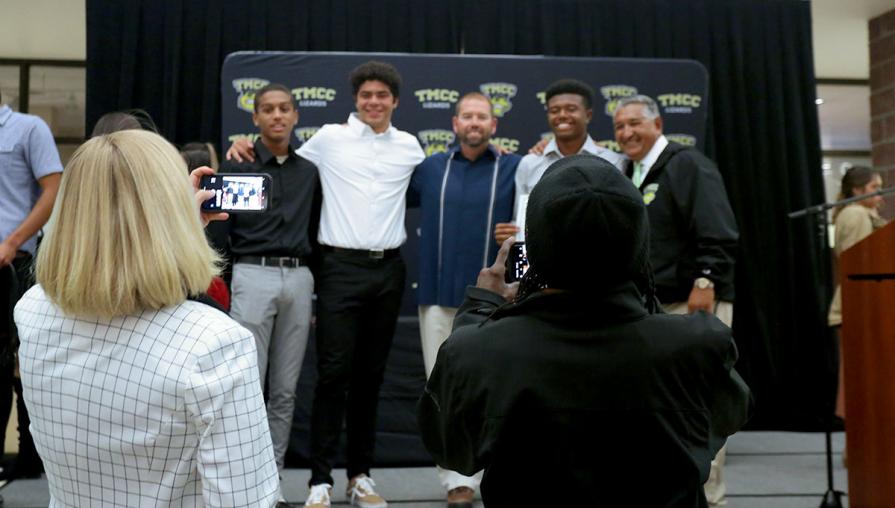 TMCC athletes celebrate and share their accomplishments over the 2019 season with coaches, family, and friends. 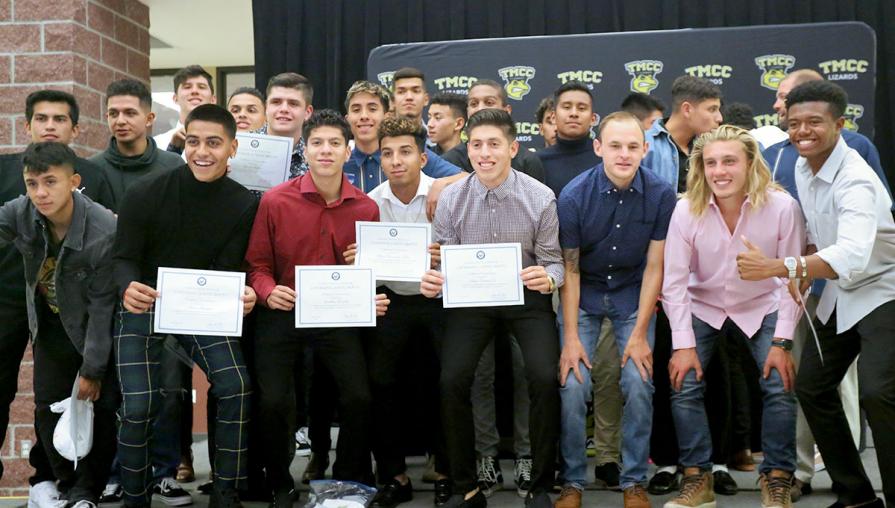 The men’s soccer team poses for a team picture at the conclusion of the banquet.