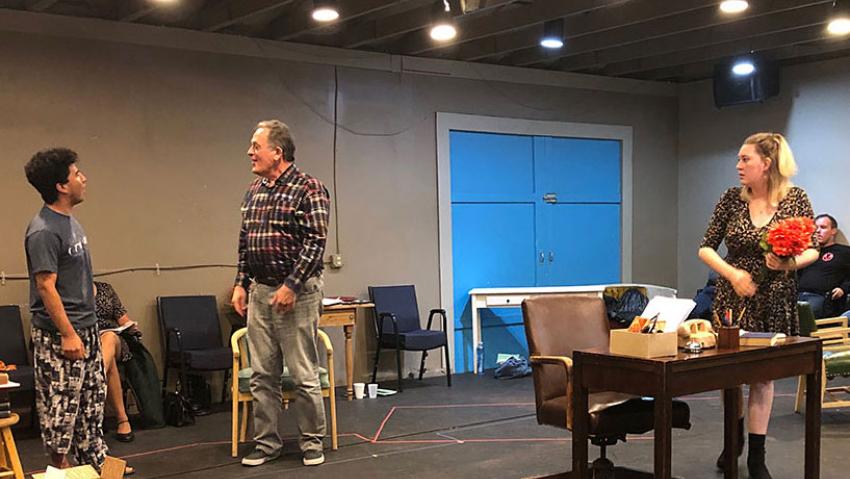 The play recounts the story of Elwood P. Dowd, a carefree and kind man whose only fault seems to be that he has an imaginary friend named Harvey, who is a six-foot-tall white rabbit. This character flaw embarrasses Elwood’s sister, Veta, and so she decides to have him committed to a sanatorium. Through a series of “comedy of errors,” the play invites audience members to contemplate the importance of the imagination and kindness.

For Director Stacey Spain, Harvey intrinsically evokes the power of theater while telling a story that audiences can’t help but love. "Theater can create a respite from the world where we can remember to invite awe and wonder into our lives, this play offered me the opportunity to celebrate the magic of the imagination,” said Spain. “Plus, I fell in love with the character of Elwood and the idea of Harvey the Pooka: an invisible friend who comes and goes to this one and that staying and helping and sometimes causing mischief. What would happen if our childhood invisible friends grew up with us?  We'd have Harvey.”

“I really like the story,” said Rodriguez, who is cast as Dr. Lyman Sanderson, a young, narcissistic psychiatrist at the sanatorium where Elwood is meant to be committed. “Elwood has this calming force...the other characters are attracted to him in this mystical way, and he’s really good at bringing people in.”

Of his own character, Rodriguez admits the role of Dr. Lyman Sanderson was a bit of a challenge. “I usually play goofballs—and so this is the first time I’ve played a character who is a straight shooter. It’s a hard role; it’s much easier to be goofy than it is to be serious.” Rodriguez will graduate in spring with a Bachelor’s degree in Political Science from UNR; because of his experience working with Spain on multiple TMCC productions (this is his third), her encouragement has given him the confidence to pursue theater after college.

Rodriguez plays the romantic lead with TMCC student Kaitlinn Young, who is cast as Nurse Ruth Kelly. “I originally wanted to be Myrtle May, because I love brats and I love being bad,” said Young. “But, I ended up getting cast as Nurse Kelly...and this is my first ‘gentle’ and feminine role.  I struggle with that, but...I love this play; it brings the good out in people.” Beyond the play’s message, the story has a particular resonance for Young, who is familiar with the situation the characters find themselves in.

“I grew up in a mental hospital with my mom—she worked there—and I used to go there all the time,” she said. “So, for me, it’s funny when everything goes to hell in the play, because I could imagine the same thing happening at the hospital where my mom works, just in a modern-day way. It’s a nice lesson about...like it doesn’t really matter if Elwood is crazy or not, because he’s the nicest person, the best person in the play, and he brings out the best in everyone else.  I think that’s a nice message.”

The partnership with Reno Little Theater, which has offered a new opportunity for TMCC students to develop their skills both on and off the stage, has created a unique collaboration for students and community members. “As we strive to offer performing opportunities for theater students during this transitional time before the East View building is completed, it made sense to go into the community and create theater partnerships,” said Spain. “I have directed with Reno Little Theater before, and I am very impressed with their staff professional development programs, their commitment to strong technical design work and the quality of acting and directing they present. That I have been able to work with the best seasoned local actors and students from TMCC who are learning their craft has been a joy.”

In addition to providing opportunities for students to appear on the stage, this partnership has enabled one TMCC student to learn more about the technical aspects of theater. “I’m very proud that Kevin Wykoff will be Assistant Stage Managing three shows at Reno Little Theater this year as a result of simply connecting the dots—matching the needs of our students with opportunities in the community for volunteer service,” said Spain.

In the days leading up to the first performance, it’s easy to see that the cast is excited to share the result of many hours of learning their lines and rehearsing with audiences. That, Young says, is the best part: “It’s definitely a commitment you can’t back out once you make it. But, creating something with [the cast] that we can share with an audience is really an extraordinary experience.”

For more information about TMCC’s Performing Arts Program, contact the department at 775-674-7610.