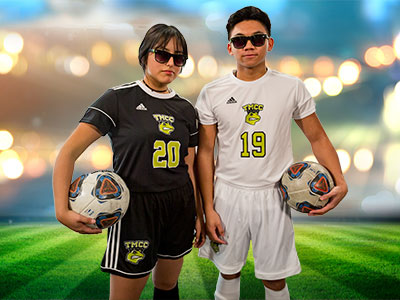 TMCC will host open tryouts for its men’s and women’s soccer teams to find 48 committed and motivated student-athletes.

“This is an exciting time for TMCC to have open tryouts to allow prospective students in Northern Nevada and our TMCC students an opportunity to showcase their soccer skills, with the aspiration of making our inaugural squads,” said TMCC Athletic Director Dr. Tina Ruff.

Those interested in sporting the bright green and black of the Mighty Lizards must have exhausted their high school eligibility and must not have used more than two years of college eligibility in order to be considered for the team. Additionally, they should be ready to embrace the life of a student-athlete, which means taking 12 or more credits in addition to participating in their athletic commitments. “We’re looking for individuals to come to TMCC and engage as a full-time student, representing the college and the community while competing at a high level,” said Head Coach Nick Arbelaez. “In other words, we need players who are motivated and committed.”

Committing to the demands placed on the Student-Athlete isn’t a choice that should be taken lightly. “Less than 10% of athletes go on to play at the college level,” said Arbelaez. “The training is elevated from what young athletes are accustomed to who are coming from high school and club teams.” Those who make the team will be expected to fulfill the requirements of full participation, with the season opening on August 1 and lasting until December 1.

Yet, for those passionate about soccer and their education, Arbelaez insists the rewards far outweigh the demands. “We want to encourage the community to come out and give it a shot. The nearest men’s soccer program is 52 miles away. The soccer program for women at the University of Nevada, Reno is right down the road—this will give athletes a chance to showcase themselves for the 4-year college level,” said Arbelaez.

The 48 men and women who make the cut will initiate a legacy of TMCC Athletics, etching their name into a program with a bright future. “Eighty percent of these teams will be Nevada athletes,” said Arbelaez. “We want to keep that true every year. The rest of the players will be a mix of International students and out-of-state students.”

Separate tryouts will be held for the men’s and women’s teams at the Moana Sports Complex on 240 Moana Lane in Reno.

Those interested in attending tryouts must register using this form by midnight by Monday, April 15. Check in for tryouts is at 2 p.m. Participants must bring cleats, shin guards, water and signed copies of both required documents available on the website.