TMCC Alumni in The News 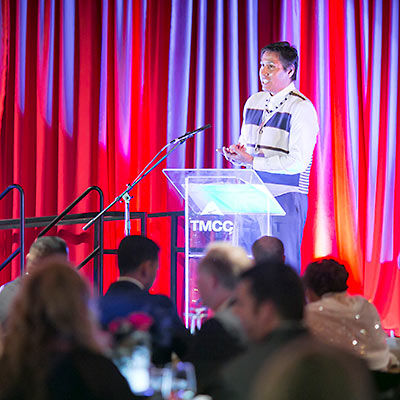 In 1992, TMCC alumnus Myrton Running Wolf found himself in need of a speech class and enrolled in TMCC’s Fundamentals of Acting—a fateful decision that would have lasting impact on his academic and career goals.

He had just put a college football career behind him, and returned home to attend the University of Nevada, Reno and work at the Minden-based nonprofit, Rite of Passage. Running Wolf knew he was good with numbers, and was seeking a Bachelor of Science Degree in Mathematics, with a Chemistry minor.

When Running Wolf describes his experience at TMCC, and with the Theater Arts Program, it is with a fond reflection for the welcoming environment he encountered—fostered by then-theater director Carolyn Wray. It was this spirit of inclusivity and collaboration that attracted Running Wolf to the program where he ultimately completed several courses, participated in multiple TMCC theater productions, and eventually served as a guest instructor.

The education and mentorship he received in the Theater Arts Program inspired Running Wolf’s love of theater and the importance of a collaborative approach in all aspects of storytelling, and served as a launching pad into a highly successful career in film, television and theater production.

In 2006, Running Wolf was honored by TMCC as the Alumnus of the Year, and was the keynote speaker at the 2015 College Heritage Black Tie Celebration, a fundraiser for the Visual and Performing Arts program. Since then, Running Wolf’s career has continued to grow. Most recently, he returned to teach at the UNR Reynolds School of Journalism and has re-connected with TMCC.

We invite you to learn more about TMCC alumnus Myrton Running Wolf and his latest projects in our latest Alumni Highlight from the TMCC Alumni Association.