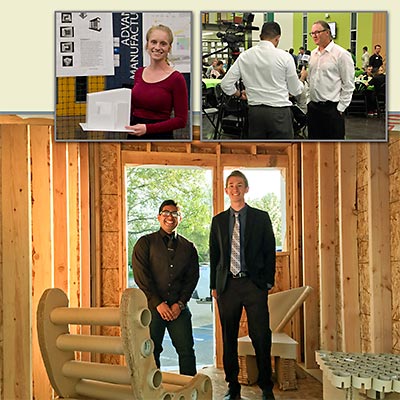 Previously in Part 3 and Part 4 of this series, architecture students designed an individual full-scale living unit, a transitional housing model for individuals who are homeless. A local company donated lumber, and the students framed the structure.

Truckee Meadows Community College architecture students were moving through the IGT Hub of the William N. Pennington Applied Technology Center at a brisk and determined pace late in the afternoon on May 4, getting multiple displays ready for a formal presentation of their ambitious full-semester project, a labor of “can do” spirit.

Earlier in the day, the 80-square-foot, 3,500 pound individual detached living “Pod” was moved by double forklifts to a trailer, from their working space behind the Center to an appropriate spot for public viewing next to the main side entrance of the Hub.

The unveiling ceremony was combined with the TMCC American Institute of Architects Student Chapter (AIAS) Architectural Gala. The event took place on Friday, May 4, from 6–9 p.m.

In addition to guest speakers, student concept posters and models were on exhibit, as well as an interpretive display of a Trombe wall. A catered informal dinner was also part of the evening. Eddy House Executive Director, Michele Gehr spoke about the seriousness of youth homelessness in the region.

"Nevada has the fastest growing homeless youth population in the country," she said. "We lost one of our youth last year as a result of a bacterial infection that moved into his heart. Homelessness in our community is a public health crisis."

Students said that they took the issue to heart while designing and building the Pod. Four of them spoke at the mic to those gathered at the event.

Tom Fougner is TMCC AIAS Student President. During his unveiling ceremony talk, he said the students wanted to transform gray and unwelcoming sites where the homeless community would gather in the future into places of respectful housing.

“And that’s what we tried to do with this entire semester, was design something that would give people their dignity back, because dignity is absolutely lost in homelessness,” Fougner said. “The first phase is getting people off the street, even if it’s just for a night, maybe it’s for 30 days, maybe it’s for 60 days. …And then the second phase was designed to be a little bit broader, a little more spread out, a little more like actually living in a semi-permanent house. And then the third phase was going over to something that kind of resembled a townhome, something that people can work from that first phase, to the second phase, to the third phase, and be proud of where they live.”

Fougner stressed the importance of a positive attitude when tackling tough problems.

Kaysi Archey is second vice president of TMCC AIAS. She spoke about how building a full-scale model of their design was also a career-building experience for her and fellow classmates.

“For many of us, it’s the first time building our own design, or the construction experience in general,” she said.

To build an architectural design from start to finish gave the students new real-world insights.

“This project is unlike any other project that we’ve had the pleasure of partaking in—in my past two years here, myself and most of the students here tonight have been introduced to what it means to work with clients, which is not something a lot of students get,” Archey said. “We understand that changes can be thrown at us throughout development, especially throughout this project—that was difficult for us, but we overcame and we produced.”

Deadlines were challenging for the classes.

“The project has allowed us to learn what it means to follow these deadlines, codes, standards, programs, budgets, OSHA, and all of the in-between. And this ever-changing development has required us to work like any firm and to just roll with the punches that have been handed to us and with that we developed from multiple posters to one group development.”

“It was both an honor and a pleasure working on this project, getting to know Michele (Gehr), people of the community—addressing the needs architecturally of a very serious problem,” Drakulich said. “It’s been an absolute honor, and it’s been tough, just a brutal semester, but it’s been incredibly worth it being with everyone.”

The initial project idea was brainstormed by architecture major James Severt, who acted as the student project manager.

“The project shows that design matters,” he said. “And it shows our college’s architecture department. Just like this is 'the new Nevada,' our ‘new’ department is evolving to where students get their hands ‘dirty’ building the designs.”

Student Victoria Reyes thanked Architecture Professor Kreg Mebust for his guidance in the project, and for helping the students to find jobs while still in school.

“He does more than just mentor, he’s like a friend, and he helps every single student in every way, so we all just wanted to say ‘Thank you’,” Reyes said.

For more information about the community architecture project, or about the Architecture Program at TMCC, please contact Kreg Mebust at 775-673-7265.