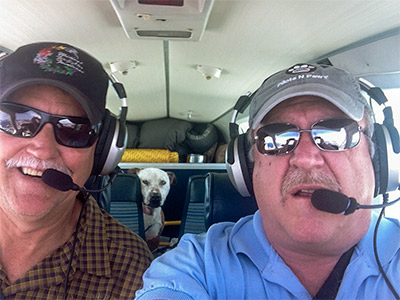 Sandy Munns (right) flies a mission for Pilots and Paws®, along with his co-pilot and their Pit Bull Terrier passenger.

There are Dedicated Volunteers Among TMCC's Faculty and Staff

He’s contributed to the Association for more than 15 years, beginning in 1998 by helping at one of the merchandise tents.

“I'm their IT Director,” Malagloiwicz said. “I have been able to use my IT skills to get them updated to newer tech to help them do more with less. I’m a vital asset to the organization.”

William “Sandy” Munns, Wildfire Training Coordinator and Emergency Medical Services Instructor has volunteered with the Civil Air Patrol, U.S. Air Force Auxiliary since 2015. He is a safety officer for the Squadron.

Munns is also a mission pilot for Pilots N Paws®.

“I fly dogs from a rescue to their new homes in my own airplane,” Munns said. “I would go flying anyway, so why not make it for a specific purpose?”

He has flown eight flights, connecting 10 rescue dogs with their new families in locations such as Salt Lake City, Utah; Henderson, Nevada; Ventura, California; and the San Francisco Bay area. One of his missions lasted two days when he transported a standard poodle from Boise, Idaho to Fresno, California.

“Another flight was a Doberman from Santa Paula, CA to South Lake Tahoe,” he added. “Both dogs had been abandoned by their previous families after divorces and left at rescues. New families were found, and the dogs needed transport.”

A fellow volunteer’s family member was inspired by one of these rescues.

“The fun part about the poodle, Coco was that she was partially deaf, and almost blind from cataracts,” Munns said. “While staying overnight with a foster family here in Reno (from the Canine Rehabilitation Center and Sanctuary in Washoe Valley), the father of the volunteer from CRCS liked the dog so much, he paid for the dog's cataract surgery after she got to her new home in Fresno.

“In my capacity, I volunteer as the Network Engineer for the vendor wireless systems for the Reno Air Races,” Alexander said. “I also volunteer for the EAA at the Air Races, serving wherever I’m needed.”

Whether it’s helping out fellow aviation enthusiasts, or in the community through his church or other service organizations, Alexander said that the time he gives is always heartfelt and deeply rewarding.

“I’m genuinely humbled by the compassion and generosity that people in this region have for one another,” Alexander said. “To me it is an honor to give something back to our community whether it be helping an ill neighbor or donating time working a community project.”

Kate Kirkpatrick, Director of Marketing and Communications has volunteered for more than 10 years in an organization that benefits others through music. She has served as a member of the Board of Directors and is now Board Chair for Note-Able Music Therapy Services, a nonprofit organization that supports music education, therapy and activities for individuals with disabilities.

"As a Board member for Note-Able Music Therapy, I advocate for musical opportunities for people of all abilities,” Kirkpatrick said. “I've seen the amazing work the staff has done, using music therapy to work with clients on non-musical goals. I've met people who have Alzheimer's, or autism, and some who have survived a stroke—all of whom are working with Note-Able staff and using music therapy to live life more fully. Their stories are so inspiring and I'm proud to be involved.”

Kirkpatrick has participated in musical groups or ensembles for most of her life—she started playing the trombone in fifth grade.

“It's important for me to give back to the community and, as a musician myself, I'm glad to be a part of this great organization,” she added.

Diane Nicolet is Director of the E.L. Cord Foundation Child Care Center at TMCC, and her deep commitment to children and families also extends out into the community.

She has volunteered on the Board of Directors of the Terry Lee Wells Nevada Discovery Museum for more than four years, and with Washoe County School District (WCSD) for more than 20 years, including serving on the WCSD Board of Trustees.

Nicolet has also offered her help and service with the Court Appointed Special Advocates (CASA) for eight years.

“Volunteering provides me with an opportunity to understand the organization, its mission, goals and dreams,” Nicolet said. “I can then share that information as a champion to help others in our community embrace the organization's work with the intent of enlisting a diverse array of support mechanisms.”

For additional questions about the Good News series, please contact Marketing and Communications at 775-673-7087.