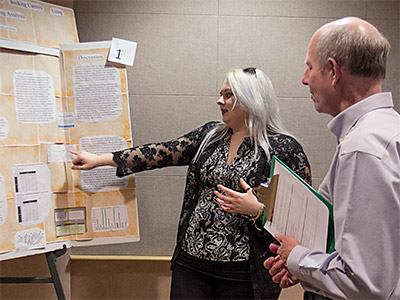 The annual Undergraduate Research in Psychology Symposium took place on May 4, with students presenting intriguing social science study projects on topics such as the relationship between music and emotion, peoples’ interpretations of honesty based on observed facial expressions, and more.

The Truckee Meadows Community College presenters completed their research as part of the capstone course, Psychology 275: Advanced Research Methods, required for the Associate of Arts Degree, Psychology Emphasis. Faculty reviewers and guests rotated among the scientific poster presentations in the Sierra Building Auditorium, listening to the undergraduate social scientists and asking them questions about their work.

Projects are based on participant studies, and the students adhere to Institutional Review Board (IRB) guidelines while conducting their research. They develop a testable hypothesis, design a research study, collect data with live participants whom they recruit, and summarize the resulting data.

Zifan Yang conducted a study about the extent to which people perceive honesty, agreeableness and intelligence in others who smile. His research revealed that in some cases people perceive women’s and men’s smiles unequally, as to whether the smile indicates the presence of a certain trait.

McKayla Barton’s work concentrated on the personality traits that handwriting reveals. In cursive writing, a long horizontal “t” stroke can indicate enthusiasm, while a capital “K” among lower case letters can show defiance. Also, a letter “m” with increasingly downward sloping bumps can show diplomacy, while letters such as “o” with an inward loop, a circle within a circle, can mean a more secretive nature. The differences can also have an effect when people choose careers based on the personality strengths needed in that occupation.

“I write with a boxy style of handwriting, so I like a little padding and time to think about a situation before anything happens—I like to plan rather than improvise,” she said.

Natalia Duda examined the tone of social comparison on Facebook posts, and the effect of these comparisons on people’s self-esteem.

Social media posters can compare themselves favorably on Facebook by commenting about how they’re doing important and fun things, such as working at Tesla, Inc. or traveling to interesting locations. That is Upward Comparison. Conversely, Downward Comparison is when people post about a boring day or a traffic mishap.

When asked if there were any challenges while conducting her research, she said that it concerned the social media platforms that Millennials preferred.

“My biggest surprise was that I didn’t realize that people don’t use Facebook as much anymore—some young people said ‘I don’t have a Facebook account,’” she said.

Xortia Ross was also intrigued by a topic involving self-esteem, “Success versus the Ideal Self and Measured Self-contempt.”

In contrast, Mary Sweet studied the relationship between personality type and music preference.

Nathan King’s work involved music, too. His study was “Do You Feel the Music? The Relationship between Music and Emotion.”

Relationships are an Enduring Topic for Studies

Her study proved out her hypothesis. Secure attachers had the most satisfaction in their relationships, people with Anxious style had the second greatest levels of relationship happiness, and the least satisfaction was reported by those with an Avoidant style.

Rebecca Morman chose for her study the relationships of people with their pets in “Who’s a Good Boy? An Exploration of Pet Ownership, Morality, and Exercise Behavior.”

In addition to seven faculty judges at the Research Symposium, two student judges also provided input to the undergraduate researchers: the student judges were Craig Histed and Nichol Zion.

For more information about the Psychology Program at TMCC, please contact the Social Sciences Department.