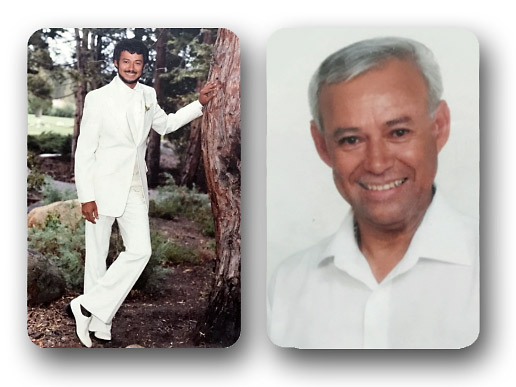 A student stood up and spoke from where she was seated in the back of the Sierra Building auditorium at the Celebration of Life service for Carlo Ferguson-McIntyre...and she said to those who turned to listen that Professor McIntyre prompted her to never forget that even if she felt different from the rest, that she can say she has a right to be there.

The foreign languages professor not only spoke English, and Spanish, Italian, French and German—but he could also speak insight.

For the students and staff of Truckee Meadows Community College who gathered for the Celebration service on Feb. 2, there were common threads spoken and read among their tributes.

Another of Professor McIntyre’s students agreed with the student quoted above. Monica Real submitted her written comments for the slides presented during the service.

“Carlo was only my teacher for two semesters, but he inspired me and taught me a lot,” she wrote. “I learned things that would never be taught in a conventional classroom, like to stand up for what you believe in and not to be afraid to question the norm. On the last day of class he told us he had hoped we learned something. I learned to be proud of my culture, and that is something that can never be taken away.”

McIntyre began at TMCC as a part-time instructor in January 1995, became full-time in August 1997, and awarded tenure in July 2001. He was nominated for the Nevada System of Higher Education (NSHE) Board of Regents Teaching Award for Community College faculty in 2006.

“She told me the reason she decided to go to grad school abroad was because of the guidance and encouragement given to her by Carlo,” Lowe wrote. “She said that he was one of the most dynamic teachers she ever had and made her feel that she was unique, special and could accomplish anything.”

He Inspired Students and Colleagues

Lowe taught many of her classes in the same building as McIntyre.

“I would go to his office, particularly after some grueling meetings and it was truly a magical experience,” she wrote. “His office was so welcoming because of its warmth, much like Carlo. It looked like a designer had come to his office because of its opulence and sense of grandeur. We would have cookies or whatever other treats he would provide. It really was a safe haven, a comfortable, warm place where I would often go just to hang out, and most importantly laugh … Carlo had a wicked sense of humor.”

McIntyre was also known as being the best dressed man on campus and someone who definitely knew how to wield a can of hairspray.

“Carlo was a true gentleman—always finely dressed and well-spoken,” wrote John Fitzsimmons, Reference Librarian. “I very much enjoyed his conversation and stories. I was in the same ‘freshman class’ of new faculty in August 1997, led and oriented by Pat Slavin, and I remember being blown away by the formal, well-dressed man next to me. I wondered if I was in the right place.”

Gabriela Brochu, Foreign Languages Coordinator, said that McIntyre helped her during the time she applied for and was granted tenure.

“Carlo liked to tell me, ‘Don’t forget that I am your friend,’” she wrote. “He strongly supported me during the tenure process and I will be forever grateful for that.”

“I walked into his office and met the classiest person I have ever known,” she wrote.