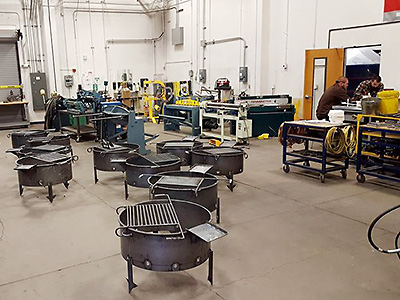 Clayton Madole, welding instructor, created a unique fire pit project built by students at the 2016 SkillsUSA competition and then were donated to Nevada State Parks.

A unique welding fabrication project designed as a SkillsUSA competition challenge has become a first-of-its-kind partnership with Nevada State Parks to benefit families enjoying time camping out this summer.

Clayton Madole, a welding instructor at Truckee Meadows Community College, had a vision to create something special when he was working on this year’s SkillsUSA contest project.

The objective was to design a useful product that could also show the skill level of the students testing. The idea for building fire pits came to the forefront and the communication with the Nevada Division of State Parks began. Nevada State Parks typically buy fire pits, said Scott Holcomb, welding instructor.

Steve Fuller, a local engineer who is also a welding and machining student drew up the prints in SolidWorks software, and therefore they had a professional printed plan to use.

The timed competition was judged on quality and production

Each team of students received the plans at the beginning of the competition. Some of the materials were pre-cut, but the teams had to modify other materials to comply with the blueprints. Holcomb said that the teams were made up of about three students each. Teams had five hours to complete their fire pit.

“They did really well,” Holcomb said. “It doesn’t look like that complicated of a project, but it is when you’re working off of a new blueprint.”

The fire pit challenge fit in the SkillsUSA category of welding fabrication. Judging criteria for this category are as follows:

Ten new fire pits were donated to Nevada State Parks on Friday, April 29. Each fire pit has a plaque identifying that it was built during the 2016 SkillsUSA competition. The plaque also contains information about the donated materials from TMCC and identifies the school team who built the fire pit.

“Everyone I’ve talked to has said these fire pits are amazing,” Madole said. “It’s a great concept, and the students worked very hard in the competition. Their work will be seen by everyone at the park sites where the fire pits are installed.”