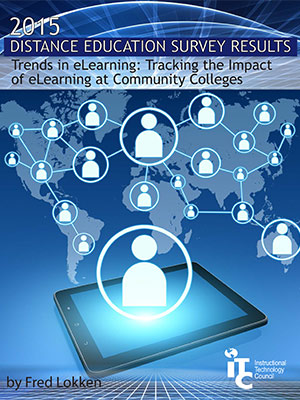 Part Four in a Series

Chief Darryl Cleveland and Professors Brian Addington and Fred Lokken show their advanced body of study in research publications and presentations; including to regional and national audiences.

Fred Lokken, Political Science Professor at TMCC, is an often-quoted expert voice about election topics in local and national publications. He is also a national authority in distance education (DE).

Lokken became a member of the Instructional Technology Council (ITC) in 2003, presented at their annual conference that fall in San Diego and was appointed as an at-large board member in 2004. He has conducted a yearly study of distance education since 2005 and has released in April the organization’s 11th Annual ITC National DE Survey of Community Colleges. This study provides data about trends in online learning, attitudes among college administrators about distance education and requirements for Web-based courses and their instructors. The ITC is an affiliated council of the American Association of Community Colleges (AACC).

“Community colleges have accepted and adopted online education almost since the technology became available — the colleges have recognized how valuable this type of course delivery is for increasing access to college courses,” he said. “Distance education rose dramatically to a nine percent enrollment rate immediately following the Recession in the 2009-2010 academic year, declined to an enrollment rate of just under five percent during 2013-2014, and is now leveling off.”

Lokken also found that fully online degree programs have increased from one or more at 66 percent of colleges in 2010 to 92 percent of community colleges in 2016. There is also a trend for instructors to report to or be mentored by academic administrators instead of information technology departments.

“Nearly 80 percent of colleges require training for faculty who teach an online course,” Lokken added. “For the 20 percent that don’t, it explains a national problem with lagging retention in online classes and the need to work for improvements in faculty training.”

Community college enrollments in general have held steady or dropped in the past 11 years, and growth in enrollment is mostly in eLearning programs, the study reports.

“One thing we’re finding is that students need to have sufficient internet connection, computer skills, self-motivated study habits and the ability to work independently to a greater extent in online courses,” he said. “Solutions to gaps in these areas include better orientation to the coursework and better monitoring of their progress through the class.”

The study also found that enrollment in online courses is growing among males. Female participation has decreased from 70 percent of the total in 2004 to 61 percent in 2015. Further, more students over the age of 25 register for Web-based classes — 48 percent of nontraditional students enroll in at least one online course.

University Business magazine interviewed Lokken on May 25 about an educational infographic that summarizes some of the data in the report and will be sent to all 1,200 U.S. community college presidents.

The title of his session, which also was published in the conference proceedings manual is “The Making and Blending of a new Emergency Management/Homeland Security Bachelor of Applied Science Degree: How and Why”. The paper is published by both the University and Agency Partnership Initiative (UAPI) and the Journal of Homeland Security Education.

“The faculty of the Public and Occupational Safety department of TMCC opted to pursue a Bachelor of Applied Science (B.A.S.) in emergency management together with homeland security,” Chief Cleveland wrote in the proceedings.

The committee developed the new degree program that was approved by the Nevada System of Higher Education (NSHE) in June 2015. Five other emergency management and homeland security programs from different states were referenced, and curricula was developed. The program will begin at TMCC in Fall 2016.

“The committee agreed unanimously that emergency management and homeland security are complimentary, cooperative and inseparable in the modern world,” Cleveland wrote. “It was further established that this degree must develop a solid ‘working’ foundation for graduates.”

Because emergency management and homeland security are relatively new fields, there is a question whether they are a well-defined ‘discipline’ or a ‘practice.’

“To this point, the TMCC committee determined the purpose of the new B.A.S. would be to develop a well-rounded, working foundation for entry in the ‘practice’ of emergency management and homeland security; with specialization occurring at the post-degree certificate or graduate level,” he wrote.

Chief Cleveland said that discussion at the conference produced an idea that has come to take root in the new degree program. It was suggested by Patricia Levy, PhD of Fort Hays State University to relate the bachelor’s program to the overarching concept of being a generalist, much like in the fields of law and medicine.

“Attorneys and physicians are first educated and trained as generalists, before they move on to become specialists,” Chief Cleveland wrote.

Emergency Management and Homeland Security-Public Safety is one of two new bachelor degree programs at TMCC. Another new program is the Bachelor of Applied Science, Logistics Operations Management.

Brian Addington, Logistics Instructor, has completed the development of TMCC’s Logistics Operations Management degree, approved by NSHE in May 2015. He is an expert in the field, with a master’s degree in project management and prior experience as Senior Project Manager in Supplier Management for the 787 Dreamliner program at The Boeing Company.

In addition to project management, he writes and presents professional seminars about Lean Manufacturing, a philosophy of production with minimal use of resources, using the most efficient methods of managing inventory. Supply chain is a term describing the regulation of supplies, inventory and manpower. Further, logistics is the part of supply chain that focuses on the movement of supplies and information into and out of a manufacturing facility, with the end result of a finished good reaching a customer.

An organization that offers support and education for logistics professionals is the American Production and Inventory Control Society (APICS).

Addington is vice president of membership on the Board of Directors of APICS Northern Sierra Chapter. He was also a presenter at the APICS Northern Sierra Chapter October 2015 professional dinner meeting. The title of his presentation was “The Accidental Project Manager.” He spoke about the topics of improved team communication, skill-building and project leadership. Multimedia techniques in his presentations include cell phone polls that show real-time results on the overhead screen.

“An effective project manager helps his team cope with change, because most people are resistant to change and all projects are really about some type of change,” he said. “So, my talk was about the people skills needed to help teams manage and cope with change.”

Strategies in motivating a project team include the following:

“The business world focuses on the quantitative tools of project management such as industry-standard charts, project milestones and Earned Value Management, but my master’s degree program was taught by an organizational psychologist and our coursework focused on why people are resistant to change," he said. "Projects are people.”

Addington also presented strategies for effective conflict resolution — dividing conflicts into categories of cognitive conflicts such as faulty assumptions or differences of opinion, and affective conflicts including ego or relational issues. Another takeaway from his seminar is that managers can strive to find a balance between hard skills and people (soft) skills.

For more information about the new Bachelor of Applied Science, Logistics Operations Management, please contact the Business Division at 775-673-7132.