All For One and One For All 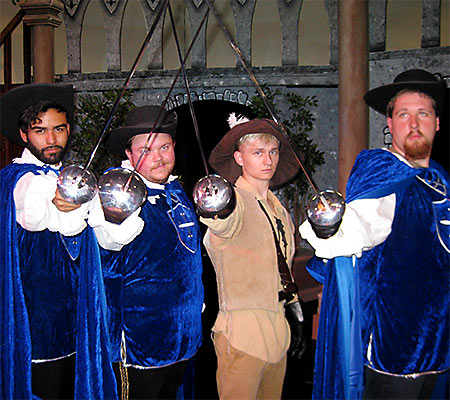 The swashbuckling TMCC Theatre Department is en garde to present its fall production of Ken Ludwig’s “The Three Musketeers”.

This action-filled comedy with duels, romance and bravado will be on stage from Oct. 9-Oct. 25 at the Nell J. Redfield Performing Arts Center at 505 Keystone Ave., in Reno, at the corner of Fifth and Keystone, next to Save Mart. The show is rated PG-13.

It is a story of intrigue, heroism, and narrow escapes.

“The best part of directing this play is the students – they are very energetic, focused and dedicated,” said Rick Bullis, director of TMCC’s production. “We have a lot of fun and a ton of running jokes that help make the work more fun. In essence, I am very lucky to have such a great cast.”

The sword-fighting choreographer is Joe Atack, head of the Lake Tahoe Shakespeare Company and the Good Luck Macbeth Theater Company.

“Thanks to Joe Atack, the stage combat has been very fun and safe,” Bullis said. “The students have a lot of enthusiasm for the fighting and they’ve impressed me with how willing they are to rehearse each fight again and again.”

“We have our prop arsenal ready with 15 dueling swords, eight muskets, one blunder buss, three daggers and a ring containing ‘poison,’” Wray said.

The set is designed by Tech Director Ty Hagar.

A ton of fun for cast

Bullis praised the show’s cast as talented in comedic improvisation.

“There are two especially funny ‘running jokes’ that have evolved during rehearsals,” he said. “One of which is the gag that we all sing a zany circus song when one of the characters is killed. It is a very sad scene, so we break the tension with our crazy song.”

And then there’s “To Pablo”.

“This refers to one of our actors, Pablo Hernandez,” Bullis said. “Pablo always has a smile on his face and he has won the respect of the entire cast for his cheerfulness and work ethic. He always arrives to rehearsal five minutes late due to his job. When he walks into rehearsal, the entire cast cries out loudly “To Pablo” and we all know that rehearsal is ready to start.”

It's a story of adventure

Characters, themes and plotlines are based on the classic book penned by Alexandre Dumas in the mid-1800s.

Dumas set the original story in the 1600s, a time of political struggle between the monarchy and the Roman Catholic Church in France.

As the adventure begins, the lead character, young d’Artagnan travels to Paris in search of adventure. He hopes to join the Musketeers of the Guard, a fighting regiment of the king’s military. Shortly after arriving in Paris, he bumps into the famous three musketeers; Athos, Porthos and Aramis.

The story thickens as he ventures to London to defend the honor of the Queen of France, confronts the fierce and dangerous Cardinal Richelieu and encounters a beautiful spy, Milady, the Countess de Winter.

“The Three Musketeers” is a classic story that has endured for more than 150 years. Ludwig’s 2006 comedic version also includes a new character – d’Artagnan’s sister Sabine, a spunky tomboy. The modern adaptation has earned positive reviews by theater critics in England and the U.S.

"(A) slick, swashbuckling romp that cleverly updates the Dumas novel ... Ken Ludwig's new version of the story simply refreshes it, distilling its energy and strengthening its timeless appeal," as reviewed by The Guardian and posted on KenLudwig.com.

Wray said the play is reminiscent of a best-loved pirate-themed film series which began in 2003.

“Ken Ludwig is a contemporary playwright who has written comedies like ‘Lend Me a Tenor’ and ‘Moon Over Buffalo’,” Wray said. “His adaptation of ‘The Three Musketeers’ is a comedic adventure story in the style of the ‘Pirates of the Caribbean’ movie genre.”

For more information about TMCC’s fall production of “The Three Musketeers,” please contact TMCC Theater at 775-673-7291.