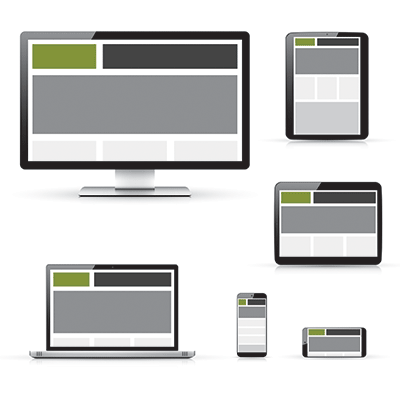 The Web Services Office at Truckee Meadows Community College has completed a fully responsive recoding of its website, improving online engagement for current and future students.

On August 5, the TMCC website went live with responsive technology, after the team recoded and retrofitted the site. Responsive website design is mobile-friendly—automatically fitting text and image content on all platform sizes, including desktop computers, tablets, smart phones and all other mobile devices.

Responsive Design Is Needed for Better Viewing on Small Screens

There has been a significant increase in mobile device use in the past few years—more than 20% of those accessing tmcc.edu do so from a smart phone, tablet or other mobile device. That number is expected to double within the next year, said Cal Anderson, Webmaster.

Responsive website design is a system of coding principles that provides the best viewing experience across a range of devices. From smart phones to desktop computers, anyone logging on will be able to read and navigate Web pages more easily with a minimum of resizing, panning and scrolling.

"Providing a better mobile user experience throughout tmcc.edu was long overdue and will help better engage our students, and allow for easier and faster access to the information and resources they need," Anderson said.

To ensure that students and staff employing mobile devices have the same optimal experience as website visitors with desktop computers, TMCC's Web Services staff (Anderson, B. Bavaro and student worker Shiva Gummi) invested its time and resources over the last year and a half into making this happen, Anderson said. Web Services is a sub-unit of the Information Technology Office at the College.

Recoding Was an Extensive Team Effort

Two years ago, Anderson and the Web Services team redesigned the entire TMCC site as they transitioned to a Web Content Management System.

"We wanted to create a stronger mobile presence at that time,” Anderson said. “However, it just wasn't feasible to do so in the time-frame we had established, and with the limited resources at hand," Anderson said.

Therefore, the team decided to divide the process into phases.

"So, when we approached this project to make the site better for mobile viewing, we weren't looking to do another complete redesign—rather, to take our current design which works quite well and make it responsive,” Anderson said. “It took us more than a year to accomplish this, as we had to recode every page and update every photo."

Anderson said that the team worked well toward their goal.

"This has been an awesome team effort and I'm really proud of my staff's considerable achievements,” he said. “This was an enormous undertaking for us."

A Large Price Tag Was Reduced by Coding In-house

The Web Services team was very aware of spending and the limited funds available in today's fiscal climate, Anderson said.

"Since we had the knowledge and ability to produce a responsive design with front-end Web development in-house using the popular Bootstrap framework, that's the direction we took," he said. “We were fortunate as we refined our plan, that we had the continued backing and support of our Vice President of Finance and Administrative Services and our IT Director behind us."

Coding in-house extended the time needed to complete the retrofit, but reduced the project’s price tag.

"It’s commonplace for third-party design firms to charge upwards of $50-$75 thousand plus on responsive redesign projects like this,” Anderson said. “By coding this project entirely in-house, we were able to save the College an appreciable amount of money."

The Next Phases Include Making Content on Other Servers Responsive, as Well

The initial release of the responsive site for tmcc.edu is just the beginning, he said.

While the bulk of the site’s content is hosted on tmcc.edu, there are a few other servers that house specialty applications and pages that also need to be considered.

"Our goal is to eventually convert the remaining TMCC webpages, hosted on other TMCC servers, to be responsive,” Anderson said.

In addition to tmcc.edu being responsive, a dedicated MyTMCC mobile app for Android and Apple devices can be downloaded for free. The app was developed to view parts of MyTMCC more easily on smartphones and tablets.

"I wish we had direct access to update the MyTMCC student portal to make that natively responsive as well,” Anderson said. “However, it's a shared statewide system used among all Nevada colleges, and not something we who are here in Web Services have access to change. From what I understand, they do have plans on upgrading all the statewide student portals to be more mobile-friendly in the coming years. Until then, our MyTMCC mobile app will continue to help bridge that gap."

Web standards are rules and guidelines established by the World Wide Web Consortium (W3C), developed to promote consistency in the code which makes up a Web page. These are guidelines for the mark-up language, HTML, that determine how pages will display in browsers. Web standards also enhance site usability and accessibility. Examples are the ease of a website’s navigation, and the best performance of assistive screen readers. TMCC's in-house Web policies and writing style guide all adhere to best practices and Web standards.

"We're committed to making the TMCC website the best it can be for all users, on all devices, across all browsers and platforms,” Anderson said. “The responsive retrofit is just one more building block to help us achieve that goal."