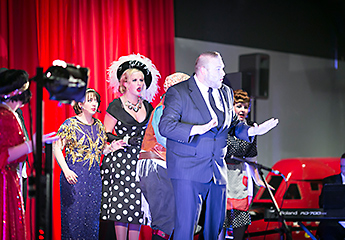 Attendees of the 2nd Annual College Heritage Black Tie Celebration in February were immersed in an evening of classic Hollywood, with musical theater performers, live art auction and elegant deserts by culinary students.

Money donated will be applied to music, art and theater education

More than 30 students participated in the College Heritage Black Tie Celebration and about 200 people attended.

“We raised almost $80,000 for Visual and Performing Arts classes and students,” Farmer said. “The specific uses will go toward scholarships and programming, and are determined by the Dean of Liberal Arts in coordination with faculty input.”

The staff of the TMCC Foundation, along with Farmer, expressed their thanks to sponsors of the event.

“We sincerely and heartily thank our sponsors and invite everyone to check the TMCC Foundation website, see updates on our Performing Arts Programs and link to photos from the event,” she said.

The evening was themed as an Academy Award-like show setting

Students in costume at various time-period stations in the museum interacted in character with audience members. Guests could pose for pictures with showgirl actresses in tall feathered headpieces. The fast-paced live auction showcased talent of TMCC faculty artists. Intensity grew as the formally dressed bidders sought to win:

“Based on the many positive comments I heard from the audience, and with the enthusiasm of their applause, the highlights of the evening were the choreographed dances through the hall, musical numbers on the stage and amazing student vocals,” said Dan Bouweraerts, Chair of Visual and Performing Arts.

TMCC alumnus Myrton Running Wolf spoke about how the arts changed his life, and the hopes and dreams of fellow students. Running Wolf is currently finishing up his PhD in Theater and Performance Studies at Stanford University. He has held positions as a creative producer for The CW television network and NBC affiliate stations in addition to performing in feature films “The Curious Case of Benjamin Button” and “The New World.”

At the close of the gourmet dinner catered by Silver Peak, selected fancy desserts prepared by the TMCC Culinary Arts students were auctioned for the entire table of the winning bidder for each fancy entry.

Feedback on the event was overwhelmingly positive

“Everyone loved the student involvement – from the greeters, the auctioneer, the student emcee, and of course, the amazing performers,” said Lisa Farmer, administrative assistant in TMCC President Maria Sheehan’s office and the coordinator of the Heritage event. “Mingling afterwards, people were talking about the fabulous desserts that our culinary students created.”

“The parents of a student emailed me to thank the President’s office for involving students in the performance,” Farmer said. “She said that her daughter was excited about being in an event that was formal, and also to have a chance to perform in front of community leaders.”

In the planning stages, the 3rd Annual Celebration will take place on February 20, 2016. A special highlight will be a performance piece by students and faculty. For more information about the TMCC Foundation, please call 775-674-7648.