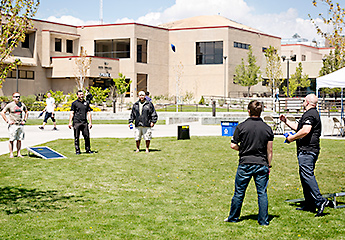 A veterans barbecue was held on the TMCC plaza. Student veterans were able to catch up with friends, meet new people and take part in some favorite activities such as "can jam."

In an eventful year since the Veterans Resource Center’s grand opening at Truckee Meadows Community College, enthused personnel have acquired additional equipment, chosen new veteran club logos, held events and brought an even greater spirit of camaraderie into a dynamic section of the V. James Eardley Student Center they call base camp.

The VRC was dedicated on April 9, 2014 at a ceremony attended by college officials, legislative representatives, local veterans groups, television and radio crews and honored guests. A coordinator for the Center, Zack Totans, was named during the Fall Semester. He served as a U.S. Army infantryman in Iraq, and graduated from the University of Nevada, Reno with a double major of Business Administration in Finance and Economics.

From the grand opening forward, inspiration has steadily and briskly grown to make the suite of offices, conference room and study areas bustling with activity and friendly support.

Felipe Gutierrez, President of the Truckee Meadows Veteran Club (TMVC) is often on-site welcoming and assisting students who stop by to visit or fill out VA or college forms. He says that upcoming events will involve veterans in getting to meet new friends and raising awareness on campus for concerns of our nation’s military servicemen and women.

Spring happenings include a barbecue and suicide awareness event

A veterans barbecue was held on the TMCC plaza on April 23, open to all student veterans and staff and police force veterans. It was co-sponsored by the Reno Vet Center, who helped provide a free tasty lunch and relaxing time for attendees to visit with each other and de-stress before finals.

In addition to the lunch, a couple of favorite games were offered for fun, including a popular frisbee toss game called “can jam.” TMVC hosted a table with information and offered assistance and fellowship.

“We extended an invitation to Vietnam Veterans of America – thanking them for scholarships they’ve provided our vets this year,” Totans said.

On Tuesday, May 5, TMVC is holding a veterans component of Suicide Prevention Awareness Day in coordination with the Counseling Center department at TMCC. They will be handing out free gun locks, which provide one extra step of thought before dramatic action can be taken at a time when a person faces a desperate situation. Gutierrez said the day is meant to bring attention to a suicide statistic that is much too high.

“There will be 22 pairs of boots displayed at the event, because 22 vets is the average number of veterans who commit suicide per day in the U.S.,” he said.

At 12:30 p.m., the 50-minute movie “Crisis Hotline: Veterans Press 1,” will be shown in Red Mountain Building room 256. It features actual audio of counselors’ responses to try and keep veterans alive when they’ve given up all hope.

“The video is open to all students, not just veterans, and there will be soda and popcorn,” Gutierrez said.

Equipment has been purchased and installed at the Veterans Resource Center

Three flat screens are now in use for veterans and friends of the Center:

Two private study areas have also been stationed in the hall directly outside of the VRC for veterans and dependents or spouses of veterans to use.

Totans has completed a survey effort asking student veterans how well their needs have been met so far.

“The Veterans Needs Assessment Survey had 75 respondents, a 17 percent response rate, which is very high for surveys to be returned,” Totans said. “We learned that 73 percent are combat veterans, 80 percent have used the VRC and our hours have been extended to better serve working students.”

Because of the requests for more VRC hours, Totans has arranged for the Center to be open two extra hours, until 7 p.m. each day.

“The Veterans Resume Writing event that we held in partnership with Job Prep was very successful, with 16 student veterans attending,” he said. “We plan to extend the event to the fall.”

Starting this summer, the University of Nevada, Reno Veteran Center will visit TMCC as often as a few times a month to twice a week. A UNR Veterans Benefits staff representative will answer questions about transferring to UNR for bachelor’s programs.

The TMVC contacted Ron Marston, Graphic Design Professor early in Spring Semester 2015 about the need for a new club logo.

Marston gave the assignment to his classes that are studying Adobe Illustrator, a vector-drawing software that is typically used to create logos and illustrations. Students came up with a wide variety of ideas that were mounted for display in the Sierra Building 2nd floor hallway.

TMVC then made their choices from the group of logo designs.

“We narrowed it down to four logos, because we felt that each would work well for different applications or uses,” Gutierrez said.

For more information about Veteran Services at TMCC or about the Veterans Resource Center, call 775-337-5612.