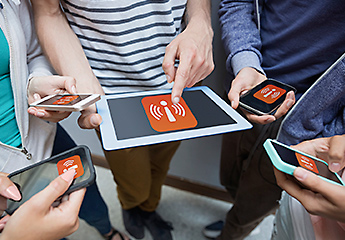 The new text and email alert system is called e2Campus, and will be tested on Friday, April 10.

Protection of students and staff during an emergency is the urgent priority driving the new adoption of a campus alert system being launched at Truckee Meadows Community College in April.

The new text and email alert notification software is called e2Campus, and will be tested on Friday, April 10 using information that the campus community has entered into MyTMCC and personnel records.

“The e2Campus platform is user friendly and allows students a way to be informed of breaking events immediately, forwarding information from the software to other mediums, thus communication with lightning speed,” said Zack Gregovich, TMCC Public Safety and Police Officer.

TMCC community will be alerted of only true emergencies through text

“This notification system is not for weather-related campus closures, but for true emergencies such as an active shooter, chemical spill, earthquake, or an actual fire when a building might need to be evacuated,” Gregovich said.

College officials said campus has not experienced an emergency resulting in evacuation in many years, and therefore it is possible that members of the College community may never receive an alert notification after the initial test. Weather closures will continue to be posted on the TMCC website and on the new MyTMCC mobile app.

“We’ve not had a true emergency in many years, but it doesn’t hurt to be prepared,” Gregovich said.

Alerts will not be sent out for practice drills except the one test run on April 10.

Should a true emergency happen, alerts would be sent out to these four groups:

The e2Campus software will send out an emergency alert text message and email at the same time. Contact information will come from what the student or staff member has provided to MyTMCC, the NSHE Employee Self-Service department, or by opting in through the TMCC Police Department website. A message will also be posted on the College’s Facebook page.

“You don’t want to miss a significant alert message – it’s just a smart thing to do to keep your phone number and email address current on MyTMCC and stay connected,” Gregovich said.

Other members of the committee guiding the alert system adoption are:

“It puts everybody on the same page, aware of a breaking emergency,” Kirkpatrick said. “The message will be brief with the prompt to go to the website for more information. Don’t miss out – update your information.”

The need for electronic alerts has been proven by tragedies at other U.S. campuses

Notifying the entire College community of an acute disaster or crisis is of top precedence, to prevent a situation such as the one that occurred in Blacksburg, VA in 2007.

Before the massacre of 32 students and staff at Virginia Tech, the College had been looking at a possible text message alert system for students and staff to be informed of emergencies, as reported on CNN News “The Situation Room.”

The first fatal shooting by a severely depressed English major began at 7:15 a.m. in a freshman coed dorm, and resumed at about 9:45 a.m. when he killed faculty and students in a classroom building, according to the WashingtonPost.com. Then, at about 10 a.m., the shooter committed suicide in an engineering and science building as police were getting close to his position.

From 7:15 a.m. until 10 a.m., there was a period of two hours and 45 minutes where students could have been alerted with one of the emergency text message systems that are now more widely available.

e2Campus is a company based in the Washington, D.C. area

e2Campus is a unified mass notification system, and was founded in 2004. More than 800 schools and 10 million users have opted into the software, according to the company’s website.

Letters in the firm’s name do not represent emergency or electronic, but something more symbolic.

“The 'e' in e2Campus stands for 'Everyone. Everywhere'. and the '2' does stand for 'to',” emailed Samantha Leland, representative for e2Campus.

The inspiration for e2Campus came from Jeanne Clery’s story, and her family’s tireless advocacy toward the Jeanne Clery Act, following her rape and murder on a college campus.

“With this notification system in place, one person can send out important information to thousands of others connected on any device,” Gregovich said.

For more information, contact the TMCC Police Department and Department of Public Safety online or at 775-674-7900.