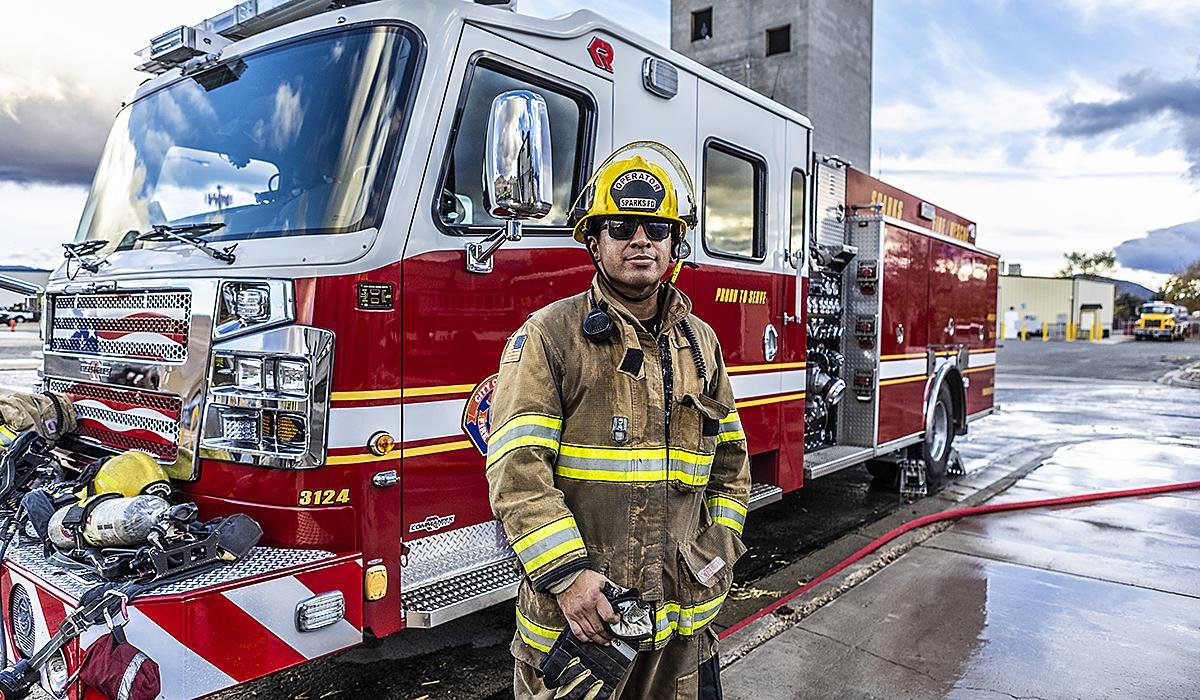 Having found his calling, TMCC Fire Academy Commander Nick Corona is now helping students become the next generation of firefighters by dedicating his time and sharing his knowledge both in the classroom and out in the field.

Although he’s been a first responder for 17 years, Corona wasn’t always sure where his career would take him. With a firefighter as a father, Corona grew up in southern California surrounded by a fire-service family. Having hit a rebellious streak, though, he got his start not in firefighting, but as an EMT-Basic in 2005, a career he pursued for a few years before deciding to enroll in a fire academy. This is where Corona quickly fell in love with the work, and, with a passion for community service and a sense of belonging, found his calling as a firefighter.

The TMCC Fire Academy, like most fire academies, is designed to prepare students for an entry-level position in municipal firefighting. Upon completion, the student will be fully certified to National Fire Protection Association (NFPA) and Nevada standards for Firefighter I. For 15 weeks, students go through physical skills training and classroom sessions.

Fast forward to 2014, Corona had worked for a few fire departments around California, but decided to apply for a position with the City of Sparks. After a few tests and visits, Corona saw the potential in the department and area. Coming from larger departments, he felt Sparks was busy but small enough to still have a home-town feel.

“Once I was able to visit the fire stations, I was absolutely able to see myself living and working up here,” Corona said. “I’m so thankful I was given the opportunity to join the Sparks Fire Department, and I haven’t looked back since.”

While starting at Sparks Fire Department, Corona had to obtain his Emergency Medical Technician-Advanced certification, and was sent to TMCC to take the course. While taking classes for this certificate, Corona had the opportunity to take a fire instructor class and put it to use as an adjunct instructor when the commander at the time asked for some additional help.

“When I started as a firefighter, I wanted to give back to the next generation of firefighters,” Corona said. “Teaching was a great way to be able to do that, plus it was so rewarding seeing students become full time firefighters once they graduated.”

Corona credits his time as a student for not only preparing him and others for field work, but also connecting him with peers that later became coworkers and lifelong friends.

“It was great meeting others who were also focused on acquiring their dream,” Corona explained. “Having those similar interests and drives helped create really strong connections that still hold to this day, and so many of them have gone on to work with the community in different areas. I get to work with them on a regular basis, and it’s great to see everyone following their dreams.”

After a few years of both full-time firefighting and part-time teaching, Commander Jakubos passed the torch to Corona because of his experience and willingness to help students. Taking over as the Fire Academy Commander in 2017, Corona has since worked with multiple cohorts of students who have gone on to start their careers, and some, in a full circle moment, have even come back to TMCC to help as adjunct professors.

Dedication to the Next Generation

Corona has dedicated his time to the Fire Academy for five years while continuing to serve with the Sparks Fire Department. Although this means his schedule has little wiggle room, Corona stands by his philosophy of “it’s about the outcome, not the income.” During his own fire academy experience, he vividly remembers being mentored by the professional firefighters in his community that he idolized. Because they were willing to invest the time into him, he wants to give back to students in the same way.

“I just remember those teachers filling our cups even though theirs may have been running a bit empty,” Corona said. “Firefighters have long shifts, they were probably exhausted, but they showed up every day and gave us their time and shared their knowledge. I want to be able to do the same for students in our Fire Academy.”

Even though life may feel a bit like a juggling act at times, Corona wants to make sure that the next wave of firefighters that come through his program are given the same quality education that he was lucky to receive.

While he’s excited for the next academy, Corona doesn’t want to get in the way when it comes to giving the new generation some time in the spotlight. He was given the opportunity from his commander, and Corona eventually wants to find someone just as dedicated to pass the torch to.

“That’s really the name of the game: take what you have, build it and make it better, and send it over to the next person to allow that snowball to grow,” Corona said. “But no matter what, I’ll continue my role as a teacher, mentor, and supporter because, after everything I was given, I owe it to these students to pay it forward.”

For more information about the TMCC Fire Academy, contact the Fire Technology Program.