Creating Space to Learn in the Theatre 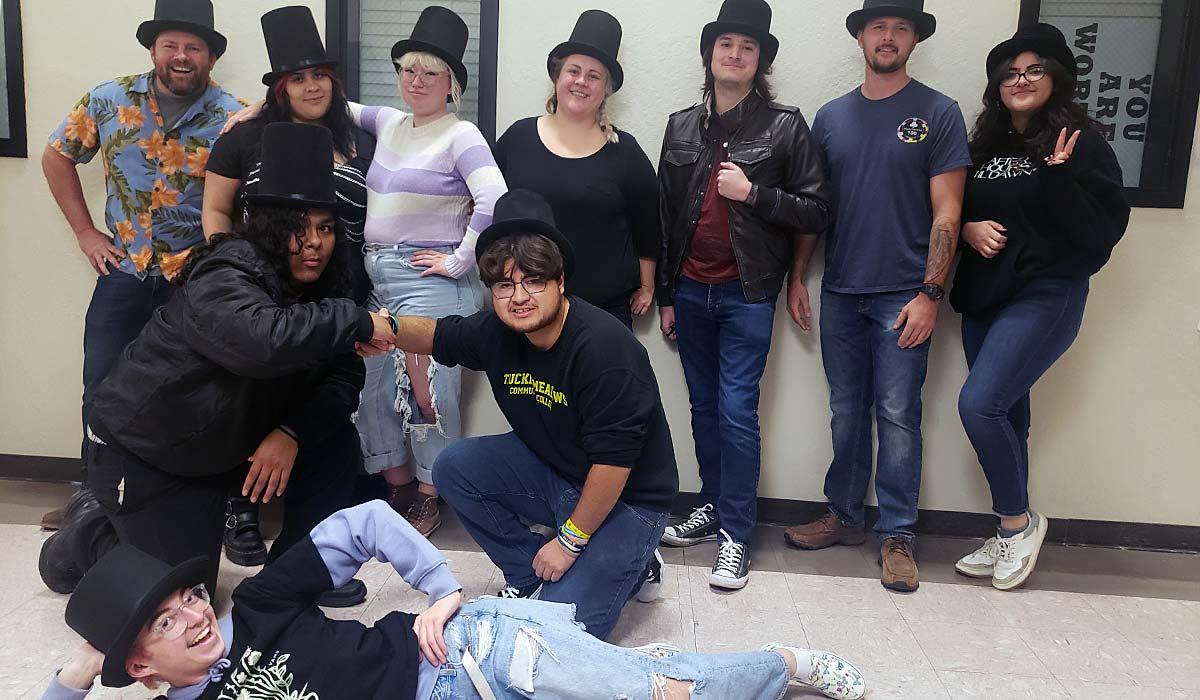 If you’ve seen the posters hung around campus, you’ll know that TMCC has a very exciting production coming up. The College’s Theatre Program has been hard at work putting together Abraham Lincoln's Big Gay Dance Party, a thought-provoking and funny performance that is being put on by students with the help and guidance of some amazing faculty, like new Performing Arts Instructor Shea King.

For the Love of Directing

King graduated from the University of Idaho in 2018 with his graduate degree in directing. Growing up in a small town, King developed a love for acting, which he pursued during his time as an undergraduate student. While studying, he found he also had a passion for directing after having the opportunity to direct for a student club. Although still freelancing as an actor, King described directing as the perfect marriage of all the components he loves about theatre.

“When it comes to directing, there’s research, analysis, working with actors and developing an aesthetic,” King said. “It’s a fun and challenging puzzle to work on, especially with students, that ends up creating this larger picture one piece at a time.”

In addition to teaching, King’s impressive directing credits include shows at the Bay Street Theater, Redwood Curtain Theatre, The Rude Mechanicals, Lewis-Clark State College, University of Idaho, Lake City Playhouse and the Academy of Children’s Theatre with shows ranging from The Legend of Georgia McBride to Obama-ology. He also serves as the Irene Ryan Coordinator for the Kennedy Center American College Theatre Festival, a program that invites 18,000 students from colleges and universities nationwide to attend workshops and performances while they compete in acting, design, directing and playwriting events.

While traveling as a director for shows across the country, King found a love for teaching theatre at Columbia Basin College. Now at TMCC, King is hitting the ground running during his first semester, teaching a full course load and working with Performing Arts Instructor Jared Sorenson and nine students to put on a production of Abraham Lincoln's Big Gay Dance Party.

King and the production team are working in unique conditions for this performance, which will take place in a dance studio space. This flexibility and challenge will give students not only the opportunity to gain real-world experience, but to also focus their energy on the quality of the storytelling.

“The unique challenges we’re facing are no different than those students will experience in the performing arts profession,” King said. “We’re not focusing on putting on a spectacle, but on the experience, and I think that is something that will impact any area these students work in, especially if they decide to pursue performing arts as a career.”

This performance was chosen not just because of its fun title, but because it focuses on topics relevant today, like discourse around opposing political views. The play follows Illinois schoolteacher Harmony Green, who has told her fourth-grade class that Menard County's most beloved homegrown hero, Abraham Lincoln, was gay. When Honest Abe is "outed" in a reimagined Christmas pageant, controversy and chaos engulf the town. As the trial of the century begins, big-city reporters and Congressional candidates descend, and family skeletons are forced out of the closet.

The students have been an integral part to building this performance, learning choreography, putting together costumes, building sets, and even holding the position of assistant director.

“This isn’t a high-stakes Broadway Show,” King explained. “It’s the perfect environment for students to learn about the industry while taking risks and finding their footing in the field.”

Tickets are free for all TMCC students and high school students on a first come, first served basis, and students must show a current student ID at the door. For general admission, tickets are $10, and can be purchased online.

King is excited for the future of the TMCC Theatre Program. He’s working with colleagues to streamline the program to help students graduate faster and make the transfer process smoother. Next semester’s production—That Day in Tucson, by Guillermo Reyes—is also already in the works, with auditions opening on Feb. 1, 2023.

“The main goal is to create relationships with the community and with local theaters, drama clubs, and high schools.” King said. “By building those relationships, this program can be very hands-on for students who have interest in the field, and they’ll be able to learn the skills they need to go out and pursue performing arts work. I want to create an environment where students go ‘I want to try this.’”

For more information about upcoming performances or the department, contact the Visual and Performing Arts Department.