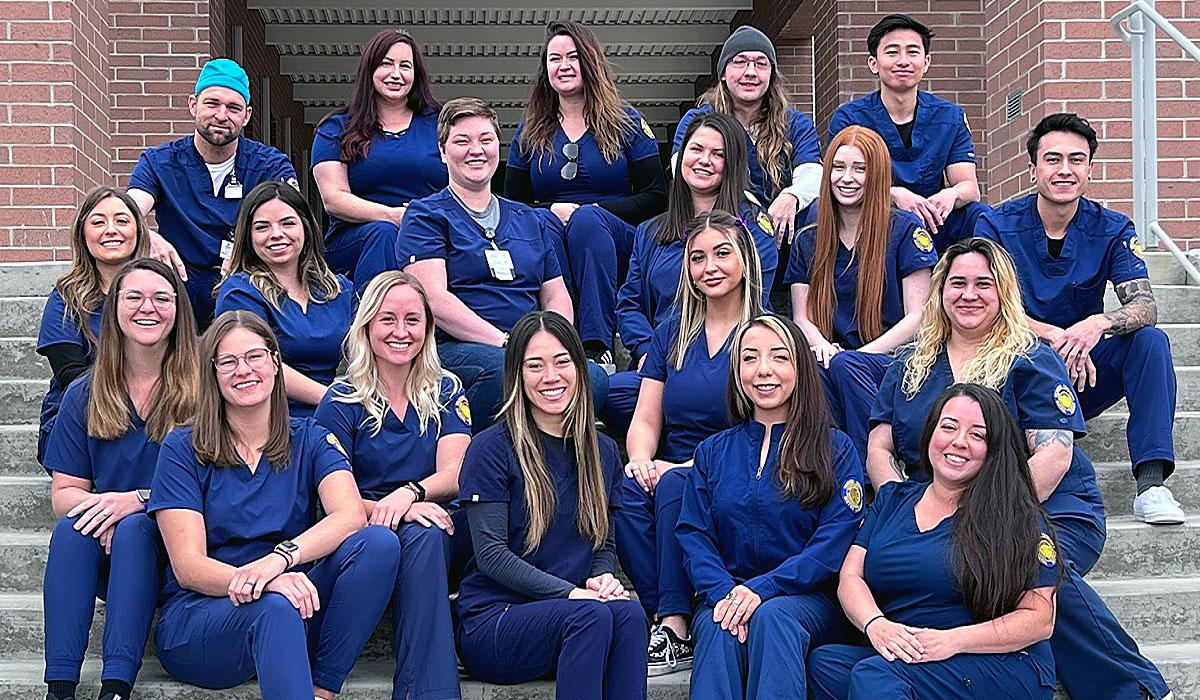 You won’t need an x-ray to diagnose the causes of dedication, spirit, and joy beaming throughout all nineteen of TMCC’s 2022 radiology graduates as they passed the national registry exam this summer. Like many students, they equipped themselves with a perceptive attitude and the motivation to achieve and harnessed enough energy to overcome the daunting transition to remote classes their first year. They are now shining stewards of patient care and experts in medical imaging, and align themselves with a workforce paramount in safeguarding the well-being of others.

Rori Wilkis, Director of the Radiologic Technology Program, was appreciative of the student's commitment to their education during a rough expanse of time in all of our lives.

“The class quickly bonded and helped each other to be successful. This class of 2022 graduates is a fantastic example of perseverance in a time when some students may have given up. It really shows that students can be successful even if they encounter hardships,” she said.

Radiology technologists share an immense degree of responsibility in the system of modern medicine, and their abilities are in high demand throughout hospitals across Northern Nevada. They are qualified to operate many intricate machines, and if you’ve ever received an x-ray, it’s thanks to specialists like them at the helm. As a result, the medical images created assist in diagnosing serious diseases, and detect injuries like a broken or fractured limb. Doctors can then get perspective on the causes of symptoms patients may be feeling, and examine how well their body adjusts to treatment.

“With our growing population, radiology technologists, or x-ray techs as they are commonly called, are needed more than ever. These technologists work in hospitals, urgent cares, orthopedic centers and surgery centers. If you ever get an x-ray exam in the Reno, Sparks or Carson areas it’s a really good chance that the tech graduated from TMCC,” she explained of their caliber.

With the newly christened “RT” gleaming beside their name, they can delight in the sensation that only comes when you’ve fulfilled one of your life’s most ambitious dreams. This graduating class will be able to impart such meaningful support to the allied health field, and their tenacity has proven that they are exceptionally certified to begin.

“Ultimately, I’m just incredibly proud of our recent graduating class. Not only did they apply to the program in the middle of a pandemic knowing they would be front line workers in the hospital without being paid, but 100% passing their registries on the first try is a true testament to their hard work and fantastic instructors,” Wilkis remarked of the students. 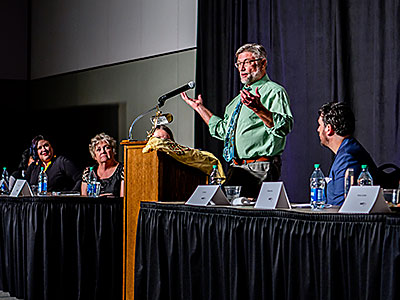 Dan Bouweraerts, Professor of Graphic Arts, received the Thomas C. Wilson Lifetime Achievement Award this month, cementing a 42-year legacy of distinguished professional performance in the advertising industry. The American Advertising Federation of Reno hosted the Ad People of the Year Awards at the Reno-Sparks Convention Center on Jun. 23, honoring Bouweraerts and several others, a testament to their pursuit of excellence.

As a recipient of this prestigious award, and nominated by a group of his peers, Bouweraerts has made significant contributions to advertising, and was pivotal in promoting the industry’s standards. His creativeness has illustrated a consistently high standard of success in the area of advertising over his lifetime, linked with strong community involvement both personally and professionally.

“I found that becoming a student of the history of advertising and design allowed me to expand my creative palettes, giving me multiple reference points with which to attack a client’s creative needs. I am also a huge fan of the design process, today this is commonly referred to as ‘design thinking,’ but for me it is a process to get to an appropriate design solution,” he said on maintaining creative excellence.

Bouweraerts first made a splash onto the advertising scene in 1980, back when everything was done by hand. Finishing a seven-year stretch in Los Angeles, he traversed across state lines to Reno, where he spent the next eighteen years working in several studios, agencies and casinos. Beginning at TMCC in Jan. 1988, Bouweraerts would later attain full-time status by Aug. 1991. All told, thirty-four years of teaching under his lofty belt.

“For me it’s never being satisfied, never falling back on what I have been teaching for a long period of time. My advantage is that the creative industry is always changing, expanding into ever-advancing media possibilities as the computer and the internet changed the industry landscape. I spend my summer break tearing apart classes and putting them back together, throwing out the old and inserting the new,” he said.

Bouweraerts heartily showed appreciation for his colleagues and mentors who have laid the foundation for his triumphs along the trajectory of his career. Among the names are Don Gerds, who “started my journey down the teaching pathway,” Pierre Rademaker, Bob Denshem and Chuck Jennings, three graphics instructors who instilled in him “a love and passion for design,” and Dr. Dick Brand, who “taught me so much in regards to building a successful program within an academic institution like TMCC.”

Bouweraerts' tale is far from over, personified by his steady dedication to TMCC. He continues a career that’s brimming with exceptional drive and a fierce adoration for educating students. “I am always trying to find better ways to execute, present, and teach the materials that I think will give our students the skills and knowledge to be successful out in a very competitive industry,” he said. 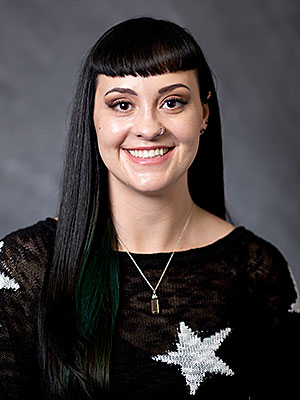 Thankfully, you don’t have to be in outer space to see the impact that students like Cassandra Barber are making at Truckee Meadows Community College. Barber rocketed to first prize in the Nevada NASA Programs’ Virtual Poster Competition on May 13. Her research project, entitled “Local Environmental Impacts of Deicers in the Sagebrush Ecosystem”, earned top marks for its comprehensive and relevant material that most Nevadans can appreciate.

TMCC’s Dandini Campus provided the base of operations for Barber as she worked diligently to unearth the environmental impacts of two rock-salt, chloride-based deicer products. “Knowing the impact deicers are causing to the sagebrush ecosystem is significant to residents or companies within Nevada who use deicers. Deicers are used by major companies for liability purposes. They’re also utilized by residential households to keep their walkways safe,” she said.

Barber’s study of environmental science has opened many doors for her over the course of her time at TMCC. Dr. Cecilia Vigil and Dr. Megan Lahti, both professors of the biology department, have encouraged Barber in her passion for our state’s ecosystem. Not only that, but their goal of achieving a sustainable campus has provided students like Barber with plentiful opportunities to conduct valuable research.

“I’m hoping that with more awareness and more knowledge as to how sagebrush is affected, maybe people will think twice about utilizing so much or maybe looking into other options that work just as well as deicers but don’t leave as much of an impact,” she said regarding the concerns associated with deicers.

A remarkable bit of Barber’s story is that she was entirely unaware it was a competition when she entered, only to have the revelation of winning the award at the end of the ceremony. For Barber, it was vastly more important that she focus on applying the scientific method and engagement in the field her experimentation resided. It struck a humble chord in her heart realizing she had won, wanting to show appreciation for those who guided her along the way.

“It goes without saying, of course, Dr. Cecilia Vigil and Dr. Megan Lahti. They have definitely guided me and helped me come up with a plan, proofread all of my stuff. They were my second pair of eyes on all of my posters, so I definitely would not be speaking to you right now or winning any awards if it wasn’t for them,” she gratefully acknowledged.

Barber also expressed gratitude for Drs. Ayodele Akinola, Laura Briggs, and Sameer Bhattarai for their roles in supporting her and motivating her to become involved with the faculty committee. As spectacular as receiving this award has been for her, and her resume, Barber’s aspirations to uplift her female colleagues within the science realm is of greater significance.

“I hope that I can inspire other women to be able to speak up and to provide their information and have self-confidence so that way maybe they will also win an award in the process. Or be inspired to go out and research things,” she said.