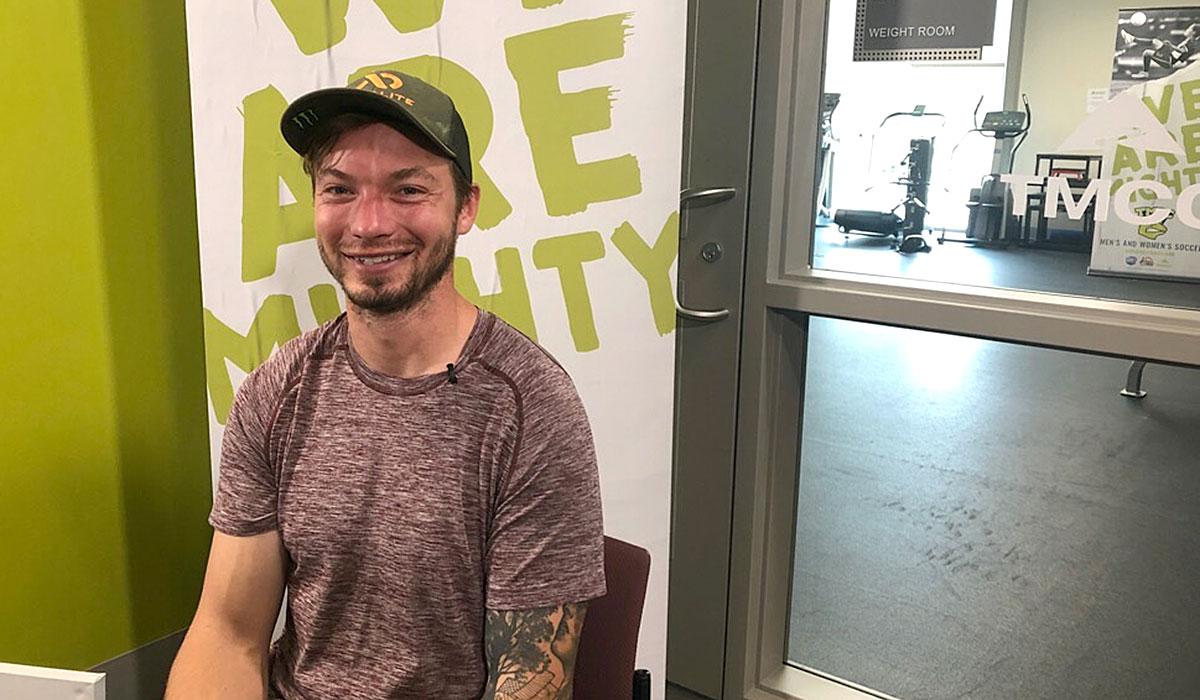 Reno native and three-time US Olympian David Wise has collected a lot of metal during his freestyle skiing career. He’s traveled the world as a professional athlete, and his determination on the mountain–and off–propelled him even while he was a student at TMCC.

In a fast, free-wheeling interview, Wise visited the Dandini Campus for the first time in many years, and shared how growing up in Reno and living up to his dreams have shaped his career.

The Start of a Big Dream

Wise is a realist, but it didn’t always seem that way. He knew from an early age that he wanted to be a professional athlete, a dream shared by children all over the world.

“Growing up, I always wanted to be a professional athlete, in any sport,” he said. “I played baseball, I played football, I was always best at skiing. I just thought that was a cool dream, I figured I’d just go for it, give it everything I had, and see if it worked out.”

Of course, if you’ve seen any news about Wise over the past decade, you know he’s won three Olympic medals–two of them gold–as well as six X Games medals, and a World Championship. His dream definitely came true, and then some.

Many of us can relate when Wise talks about facing the nay-sayers, the ones who don’t believe that a goal can be accomplished. Here at TMCC, students face adversity all the time, whether it’s in the classroom or elsewhere in their lives.

Now that he is a role model for young athletes everywhere, Wise takes this all in stride.

“Whenever I talk to people who are trying to make changes in their life—whatever kind of change it is—I just say: rather than feeling bitter about this pile of adversity that you have in the background, look at it, (and) use it. Pick through, and figure out what you can use in that pile of adversity to fuel you, and fuel your fire for the next obstacle you have to overcome.”

Getting What He Needed at TMCC

Since he had been focused on becoming a professional athlete from such a young age, Wise enrolled at TMCC knowing he likely wouldn’t graduate. Like many students, he made the decision to take classes to get what he needed to move forward in his career.

“When I graduated high school, and was doing some classes at TMCC… I remember telling everybody: ‘No, I’m going to be a professional skier.’ And they would laugh at me,” he said. “They thought that was the most outlandish thing for a recently-graduated-from-high-school-kid to say. Fortunately, if anything, that was just fuel for the fire, because that was like: ‘Well, I’m going to show you, I think it can be done. And I think I’m the person to do it.’”

“In my sport, there’s no college—you can’t go to a D1 school and get a scholarship, nothing like that. So you either make it as a professional, or you don’t.”

To his surprise, he found the instructors at TMCC to be fully supportive of his career goal. In reality, many students—like Wise—attend classes to gather the skills they need, and once they have mastered those, some students choose to chase that dream instead of finishing their education at TMCC.

“All the teachers that I interacted with, I told them up front: I’m probably never going to graduate from college, but I’m here getting tools for what I want to do,” he said. “And they all respected that, and I had this dynamic relationship with educators because they just wanted me to chase my own dreams. They were like: ‘Yeah, you don’t have to have a college degree to do what you want to do.’”

Wise and his wife, Alexandra, both attended TMCC during the early time in his career, before he reached professional success.

“I think I was 20 years old, and I had been a professional skier for 2 years. But when I say ‘professional skier’, I’m talking about barely breaking even,” he said. “I was winning a contest here and there, but I wasn’t having the results that I felt like I could have. I had the skills, I had the abilities, I could pretty much match anybody in the game trick-for-trick, grab-for-grab. But I wasn’t having the contest results that I wanted.”

At this stage in life, the Wises welcomed their daughter Nayeli. Like many students who have family obligations and careers, this new addition helped Wise to focus on what truly matters.

“It actually was a good perspective change for me,” he said, “because I had been so dedicated and so passionate, and so relentless about making it as a professional skier, that in some ways I kind-of got lost. So it was actually really good for me to have a daughter and a wife who cared about me, regardless of how I did on a pair of skis, because that perspective kind-of empowered me to just go out there and enjoy what I was doing, instead of pressuring myself about it.”

As Wise built his career, his focus on family became clear, and the birth of his son Malachi a few years later reinforced this.

“What really matters is what you do for the people around you, the love that you have for those around you, how you interact with them, how you treat them, so my family’s always the one that reminds me of that, when I do start to get caught up in the hustle.”

Like all parents everywhere, even a world-renowned athlete has humbling moments, too.

“When my kids were younger, I would go from competing on the world’s stage at the Olympics to two days later, changing diapers again. I’m like: ‘Oh, this is a good reminder, I still have a lot more to who I am than just skiing.’”

Professional Success Comes to Those Who Focus

Wise started seeing breakout success quickly in his career, with a win at the X Games in 2012.

“I had a couple of seasons where I really couldn’t lose,” he recalls. “I was winning every single competition, and I got a taste of that success there—everyone said when you hit a level of success, you’re gonna suddenly have that satisfaction of what you are searching for in your life.”

Trips to the Olympic Games in 2014, 2018 and 2022 resulted in two golds and a silver medal, and cemented his legacy in halfpipe skiing as one of the world’s best. But even atop the medal stand, Wise humbly believes that success is a mirage.

“[Even after] I won everything I ever dreamed of as a kid, I still wasn’t totally satisfied,” he remembers. “Having a bigger house, a fancier car, will be temporarily satisfying, but two weeks from now, you’re not going to have the same satisfaction as you have when you first got it. So, that’s when I started realizing, wow, it’s a lot more important to do something with the gifts you’ve been given, [instead] of just enjoying the gifts you’ve been given.”

“Competition is interesting because every single competition that you do along the way seems like the biggest thing you’ve ever done,” he said. “Looking back on my career, early on I would pressure myself for every single contest. I’d feel so nervous and anxious to compete. But the more I would do it, the more I would realize, well, it doesn’t really matter what competition this is. It’s just another run through the halfpipe.”

Anyone who’s ever faced their fears of public speaking or being on the stage can likely relate.  It begs the question: how does Wise get over his nerves when performing on some of the world’s biggest athletic stages?

“When you’re in the moment, you do a really good job of staying in the moment and not worrying about the past (or) the future, but just what you have control over right now. It kind of takes the power away from all that pressure and anxiety, you can just go out there and enjoy it.”

In the years between his Olympic competitions, Wise realized that his career success is not responsible for his own satisfaction. In the meantime, Wise has also started to focus on other things that will sustain him long after his professional athletic career comes to a close someday.

“I’ve really kind of built my career on communications. I’m doing a podcast now,” he said. Besides his prowess in the snow, Wise has also excelled at building a social media presence to share with his fan base. “A lot of the things that I’ve done, sort of extracurricular stuff outside of my sport and competition… I do a lot of speaking engagements and just a lot of different styles of communication. That’s something I learned, I discovered at TMCC, that I have the talent.”

Giving Back, Locally and Globally

As he continued to see huge success on the podium, Wise and his wife began to think about how they could use his winnings to create a positive influence in their lives.

“Life is a lot bigger than this game I play on a pair of skis,” Wise said. “It’s something that’s fun that I get to do, I’m fortunate enough to be able to do it for a job, but the things that I do for the people around me are a lot more important than what I do in whatever competition it is.”

So they hatched a plan to use some of Wise’s winnings to support various charities, hand-selected by the Wises based on their personal experiences.

“We started the Podium Challenge, my wife and I, ten years ago… and it was just a way of us saying, ‘Hey, I’m standing on top of the podium right now, but how can I use this stack of cash that I get for winning this contest… how can I use that to empower other people to maybe follow their dreams?’”

Each time Wise finds himself atop a podium, they donate a portion of the cash prize in support of a different charity. The Wises are proud to support small non-profit organizations, both in northern Nevada and throughout the world.

“We’ve done various causes over the years—Sky Tavern was our big one this year—and we worked with the Empowerment Center,” he said. “(We’re) just trying to use my story to inspire other people.”

Wise also remembers his travels to third world countries such as the Dominican Republic, Haiti, Honduras, and Guatemala, where he saw first-hand the need for clean water. “This is a cause I believe in, it’s something I feel like I can support. If anything, it’s almost hard to choose, because there are so many good causes out there.”

“My goal is to help (others) be generous and help other people live their own dreams. Because if we all support each other a little bit more along the way, society will change.”

Did you know? At TMCC, anyone who has completed even one course is considered an alumnus/alumna, and can become a member of the Alumni Association.