Write On: English Revises GE Classes with a Focus on Fun 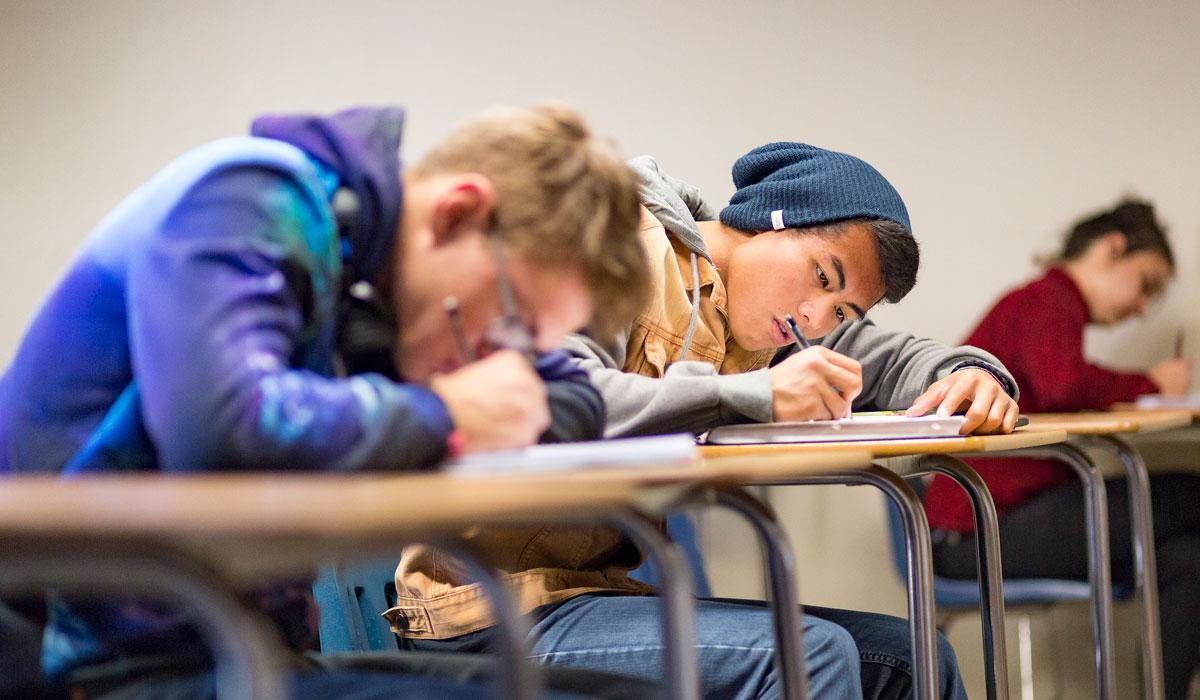 Imagine this: you’re fulfilling your general education requirements in an English class at TMCC and you’ve lost track of the time. Not because you stayed up too late the night before, but because the class feels less like a class and more like… the best discussion about culture, movies or mythology you ever had.

Does that sound like a work of fiction? Well, it’s not, thanks to three newly redesigned class offerings from the TMCC English Department to keep you on your educational path. More importantly, though, these kinds of classes will offer up much more than requirements and checked boxes. Thanks to the careful design, knowledge and passion held by each instructor, you’re also sure to experience intrigue, excitement and an expanded view of what you’re actually interested in.

If all you’ve experienced from an English class was red ink, it’s time to let go of the past trauma of the five-paragraph essay and embrace the new possibilities you can find in an English classroom where art, film, science fiction, fantasy, “the forbidden” (banned books and censored art) and more can lead you to new, fascinating places where your imagination and creativity can play.

Why Books Can’t be Movies

Have you ever thought “that movie was nothing like the book”? Chances are, you probably have… but have you ever wondered why? In English 202, Film Analysis and Interpretation taught by English Professor Bradley Summerhill, learn how social and cultural values are translated from text to the screen (or sometimes not translated and why) by comparing a novel that was made into a film.

“A book is not a film and vice-versa,” said Summerhill. “But students will learn about the decisions filmmakers have to make as they become more familiar with the process of film analysis.”

You will also learn how to apply a socio-cultural approach to your analysis of both literature and film by learning to tune your eye and ear to notions surrounding race, sex, gender, money and others as they arise due to authorial or directorial intent, or as unconsciously through bias or historical and cultural contexts. In particular, the class will zero-in on the origins of racial representation through D.W. Griffith’s 1915 film Birth of a Nation.

While students are required to do some film-watching outside of class, the understanding of why filmmakers make the choices they do will become more apparent; anti-heros–which populate literature across several centuries–make poor movie characters. There is something about the proximity to reality of film that makes evil too psychologically close for comfort.

Yet, other choices that authors and filmmakers make reveal the source and implications of our widely accepted cultural values, and offer glimpses into how those values are “truths” (not “truth”).

In any case, where else can you watch films such as Bladerunner, The Talented Mr. Ripley, Apocalypse Now, The Color Purple, No Country for Old Men and others for homework? Grab your popcorn and earn your GE-credits Hollywood-style.

Beyond the choices that authors and filmmakers make to create literary work or film reside the question of what people should or should not be able to consume. In English 246 taught by English Instructor Joseph Sanpietro, students will not only examine art, literature and film that have been censored (examples include Geoffery Chaucer’s The Canterbury Tales, Harper Lee’s To Kill A Mockingbird and even J.K. Rowling’s Harry Potter series), but also censorship itself. “I want students to talk about the concept of censorship, and look at who makes those decisions,” said Sanpietro.

The idea of censorship or banning is a complicated one, especially in the context of art or expression which seeks to provoke ideas, conversations and reactions that shatter our complacent, ordinary lives. Yet, how far is too far when it comes to depicting the dark aspects of human nature and why?

The list of art and books that have been censored in one way or another is unbelievably long, and share very little except for the fact of their banning. In the case of Chaucer, the story of the Wife of Bath (one of many stories that comprise The Canterbury Tales) “vulgar” language made the book unsuitable for public discourse, while To Kill A Mockingbird not only had offensive language, but also entered into race relations in ways that unsettled readers. Harry Potter books, which explicitly condone witchcraft, challenge religious belief systems of readers in uncomfortable ways.

"Literature, media, and art touch our lives in profound ways, and they reflect who we are at our best and our worst," Sanpietro continued, "and when the darkest impulses of humankind show up in a way that the world can see it, there is an impulse to shield others from seeing it."  Works like Jay Asher's 13 Reasons Why put a spotlight on teenage suicide, while Hubert Selby Jr.'s Requiem for the Dream discusses addiction in raw unflinching language.

"The question isn't whether a work should be censored or banned or even challenged. The question is more introspective, and in a society where we have created an echo chamber of information, one that is vitally important today,” he said.

In addition to confronting material that could, potentially, be triggering, students in Sanpietro’s class should be prepared for difficult conversations, both with themselves and others. Yet, the rewards for engaging in this work will be many. “In my experience, the hardest thing for students to do is to make a decision. In this class, they are going to take a look at their own views versus the needs of society and to make a decision. Just because you don’t like something, should other people be precluded from experiencing that thing?”

This is not another class in which you will write about some distant topic that does not matter to you. Rather, in examining your own resistance or acceptance of a potentially controversial art object, piece of literature or film, you will weigh the balance of what should be allowed to be expressed and why.

“This class will lead to conversations… and when people have conversations and expand on what they think… that is the goal of the class,” said Sanpietro. “I want to create a safe place where people can express their ideas, feel like they are being heard, and also make sure that everyone knows that we’re talking perspectively. You can have an opinion that is separate from your identity,” he said.

Get Your Write-On… Creatively

If your experience of English classes are confined to literature courses or writing classes where you are tasked with “expository” writing assignments (read: your traditional argumentative essay), English 205 will expand your writing repertoire well beyond this kind of essay. This class explores all the genres within a contemporary context: short stories, poetry, memoir, screenwriting… the possibilities are endless.

“I really focus on making sure there is a diverse group of writers that students read in this class,” said English Professor Lindsay Wilson. “In English 205, I teach contemporary work, so students get a sense of what current American poetry, short story and memoirs are. So, if you’re a student who’s always taken literature classes focused on writers like Shakespeare or Mary Wollstonecraft, this is not that class. I teach writers who are… alive.”

Lindsay has also been teaching writing by TMCC students who have been published in TMCC’s award-winning literary journal, The Meadow. “I can point to what a student might have done for a specific assignment in previous years of the class,” he said. “I think that shows students how they can succeed in a particular assignment… instead of saying: here’s this person who won a Pulitzer. Write like him.”

Several students who have taken Lindsay’s English 205 class have continued the development of their creative writing in UNR’s 300 and 400-level writing courses. The class prepares them not only for the creative side, but also how to be successful in a class that is structured around workshopping both your and other students’ works.

Another little-known fact? TMCC has produced several successful poets and writers over the years who have continued to graduate-level creative writing programs and who have been published. If your passion is writing, English 205 can be your entry into a successful career while you earn your Fine Arts General Education Credit.

If you’ve been looking for classes to fulfill your humanities or fine arts general education requirements, these English classes will do exactly that while filling your time with meaningful discussions, food for thought and an opportunity to see if you can wield the power of the pen.

For more information on these exciting new course offerings, contact the English Department at 775-673-7092.