What's in an Enzyme? Undergraduate Research in Bio 190L 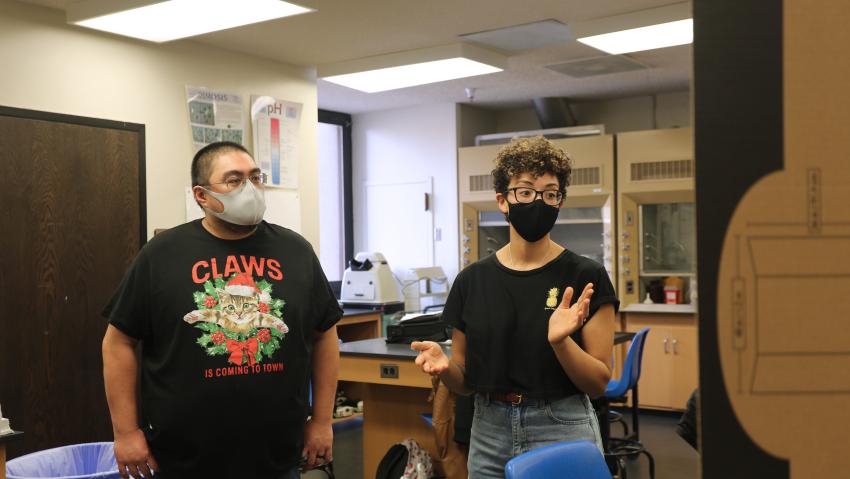 Students in Dr. Sharif Rumjahn’s Biology 190L class might be taking their first steps into a career in the sciences or allied health fields, but this semester they experienced something new: research that turned what can be an abstract concept—DNA and proteins—into a tangible learning experience. For future professionals who will literally provide hands-on help to those in need, dealing with abstract concepts in the early semesters of their academic careers can be an added challenge.

Trinity Alvarez, a TMCC High School student, is enrolled in the class and participated in the Design 2 Data (D2D) research project with her classmates Cindy Garcia and Stacie Bodel. She began attending TMCC High School two years ago and is on track to graduate with her high school diploma and associate of science degree in Spring 2022. “I love the environment here, I love the rigor, like in this class. It really fits my academic needs and it’s a really great school,” she said.

Alvarez sees herself pursuing a career in research psychology, and continuing her journey in graduate school. The semester-long research she experienced in Biology 190L, focused on testing whether B-Glucosidase B-enzyme (BglB, known in the class as "bagel") mutations would affect their function. This D2D project allowed her to not only dive deep into only only the DNA and proteins, but to also apply the scientific method and practical research skills.

The nationwide project, called “Design 2 Data” was initially proposed in 2019, but its implementation at TMCC was delayed to Fall 2021 because of COVID-19. This year, INBRE-funded this D2D research that tasked Biology 190L students to design and modify DNA sequences and then test the resulting mutant (changed) proteins. D2D was piloted by UC Davis, and TMCC is one of only a few community colleges who have implemented the undergraduate research opportunity so far. The point is to better “train” computer predictions of protein mutations based on student-generated results.

Students in the class, under the direction of Rumjahn, used a computer program called “Fold It” to design their own mutant protein. Groups in the class chose one amino acid to mutate, and based on the feedback they received from Fold It, would predict whether or not this single mutation enzyme would be favorable or unfavorable to the overall structure of the protein and its function. As the semester progressed, students not only practiced research and laboratory techniques but acquired hands-on and critical thinking skills they will need in their professional careers.

In fact, it was a learning experience for everyone. “I learned as much from the students as they did from me,” said Rumjahn, who explained that he will continue to teach and refine this research project for a 20-person classroom of students largely in pursuit of degrees and careers in either the nursing or allied health fields.

“We have research opportunities for students at TMCC,” Rumjahn said, who explained that the skills and experiences that come out of a research project like this aren’t just related to the project itself. Students also learned how to work together in a team, troubleshoot problems and how to think critically about all of these experiences to articulate them on a poster that they presented as their final assignment in the class.

“For those students who are going into an allied health field–they’re always going to work on a team with other health professionals. And honestly, as scientists working together toward a common goal with other scientists is how we accomplish big things,” he said.

Roll Up Your Sleeves: It’s Time for Hands-On Learning

Another group in Rumjahn’s class embraced their team name—Pineapple—by adding decorations to their poster board explaining their research. “Designing and Creating Mutant B-Glucosidase” are not only their methods, D2D workflow, confirmed mutations and results, but a series of playful pineapple illustrations, suggesting that the work of doing research like this is not only about learning—it can also be fun. “We started with leucine to mutate to valine for the sole purpose that they are both hydrophobic amino acids,” explained group member Alix Maria.

“This has got to be the coolest thing I’ve ever done in science class,” she said. “I think for me the highlight was finding out that your work is going into a national database... and will be part of a bigger picture, and maybe one day to help with the work of developing vaccines, like ones for COVID-19.” By training computers to create more accurate models for mutations among proteins, TMCC students are, in fact, contributing to the accuracy of these predictions, which could have important impacts in the development of vaccines, medications and several other everyday products.

The highly visual interface of the Fold It software assisted students' understanding, allowing them to truly “see” the proteins they were manipulating in their research in a “more visual way.”

“You really get to see how proteins fold and form visually... like if this little thing changes, then that impacts the rest of the protein #D structure,” said Maria. Although the goals of the D2D research project were met, Maria’s group can nonetheless envision future studies that could deepen the understanding of what other mutations might bring to their protein.

When asked for highlights of their experience, most students cited the skill involved in handling the micro-pipettes: transferring and measuring tiny amounts of liquid containing enzymes, DNA or their mutant protein. “That was fun to learn, and to measure such small amounts of liquid,” said Maria’s partner, Destiny O’Neil. “Some amounts were so small, we asked each other; ‘are we sure we got any?’ Yet, it was the most hands-on tool that we used for this project.”  For reference, students would commonly measure volumes smaller than a drop of water.

Stacie Bodel (right) said this hands-on research project was useful in getting her started on a new career path.

Although the demands were many, students found value in a semester's worth of hands-on research.

One student joined the in-person poster presentations by Zoom.

Camraderie, collaboration and teamwork were soft skills practiced alongside hard science in Biology 190.

Learning Skills for the Future

On Dec. 8 in RDMT 302, posterboards articulating the semester-long journey that students took in this Biology 190L class were displayed with obvious pride. The classroom buzzed with lively discussions about methods and enzymes as Rumjahn and other TMCC faculty visited each group to hear about their research—what they learned, what went well, what didn’t, and how the experience will help them in their educational and professional journeys.

One student, Stacie Bodel, is taking the class as the first step in her journey to change career paths. Once a communications and advertising professional, Bodel’s goal is to become a nurse.

“This class is a prerequisite for a prerequisite,” she joked. “So this was my first real science class as an undergraduate student [this time around], and already we were working with DNA.” Bodel said the hands-on nature of the course enriched her experience beyond memorizing formulas. Designing and Building a Mutant B-Glucosidase, Bodel worked with a diverse group which included a TMCC High School student and a traditional first-year college student on a project that explored the effect of mutating the amino acid tryptophan to asparagine in the BglB (bagel) protein.

Like many students in the class, Bodel said that the experience in Biology 190L echoes her experiences at TMCC, where the student-centered approach is noticeable in classrooms and even in public spaces. “TMCC is one of the best choices I have made,” she said.

One thing is certain: TMCC students majoring in the sciences will have the option to participate in undergraduate research in their first semester in a way that will contribute to a larger body of science... as well as their own education.

For more information about studying Biology at TMCC, contact the department at 775-673-8251.