Find your Future in the Wildland Fire Training Program 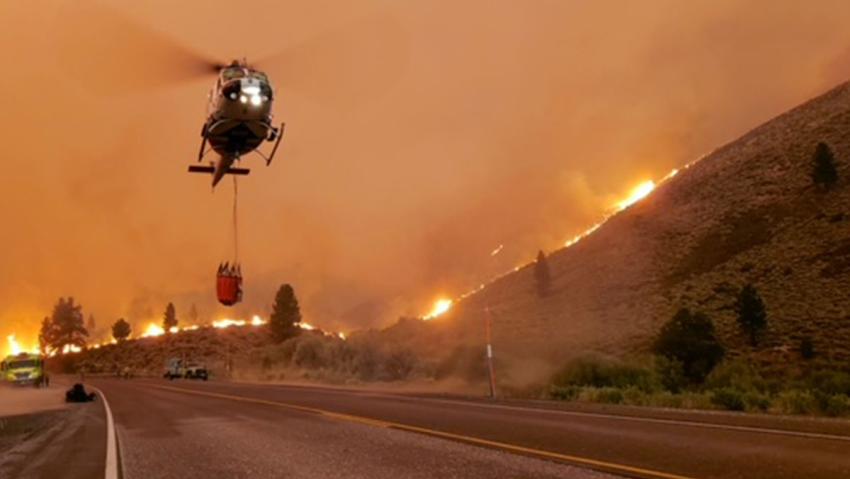 Julli Giampapa is a member of the Battleborn Helitack Crew, airborne fire professionals whose jurisdiction covers everything East of the Sierras from Bridgeport North to Doyle, California. In 2022, she’ll start her seventh season as a professional in a career that is about as hands-on as it can get.

She’s also a part of a slowly changing demographic: once a career held exclusively by men, Giampapa is breaking barriers while putting out fires. The only female of a crew of 28, she admits this isn’t a career for everybody. But if the outdoors, physical fitness, and helping to mitigate one of the American West’s most prevalent natural disasters sound like something you could be passionate about, then the fire service might very well be for you.

Not sure? TMCC’s Wildland Fire Training Program is opening its doors on Jan. 27, 2022, for a two-day basic training program that results in a Wildland Firefighter Type 2 Certification, a document that can open doors to a fun summer job or a lifelong career. 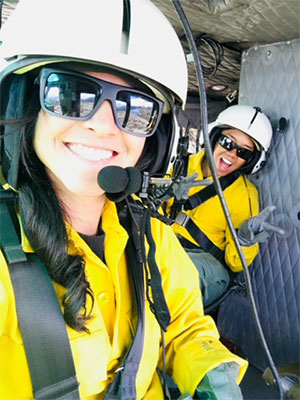 Julli Giampapa has been a fire professional for nearly seven years and is a member of the Battleborn Helitack Crew.

For Giampapa, being a fire professional wasn’t necessarily a career she had her sights on, but it’s one she wouldn’t give up. “Somebody’s got to keep these boys in line, right?” she joked, before becoming serious again. “Even though I’m the only woman on a crew of twenty-eight, I’ve never even been more at home. It’s not my family that helps me move in the offseason...it’s my fire buddies after the long days and long nights spent through the summer.”

Giampapa was eighteen when she became a Wildland Firefighter. “I’d just graduated high school, and I really didn’t know what I wanted to do with my job. I was going to the gym to keep up my physical fitness and I was contemplating getting into construction work,” she said. When a friend told her that she would be a good fit at Wildland Fire Fighting, Giampapa thought: Why not give it a shot?

“I moved up to Southern Oregon to do my first fire season,” she said, admitting that the job initially might require traveling and relocating to get your foot in the door. She eventually returned to her home state when she got on a fire crew with the Nevada Bureau of Land Management (BLM). The following year, she was able to become a member of the Battleborn Helitack Crew, where she remains to this day.

“I”m coming up on my seventh season of fighting fire. I have yet to find something more rewarding. This is what I love doing,” she said. “I get paid to camp, hike, run... I work out on my own anyway, so what better way than to get paid for doing it?”

A Day In the Life

A typical day for Giampapa begins with a morning briefing that begins with a weather forecast and seat assignments for the day followed by a two-hour workout. Then, she and her crew complete maintenance and beautification tasks around the base, as well as additional trainings. “There’s thirty of us, so we typically split up into three groups of ten. Of course, unless there is a fire call.

“There’s almost thirty of us, so we split up into three groups of 7–10. While one module remains at base for initial attack, the other modules might go up to Spooner Summit for a tree-cutting project or to a previous fire to rehabilitate or reseed the landscape–basically, we perform whatever tasks Forestry has planned for us. We keep busy with several projects and trainings while we wait for the next fire call,” she explained.

If there is a fire, Giampapa and her crew are dispatched, which means they’re up in the helicopter and en route no more than ten minutes after the call. If the fire is in a remote area, they might be the first ones to arrive. In that case, Giampapa and her crew provide information for crews on their way to other possible access points.  They also call in bucket drops to help “cool” the fire and the surrounding area while constructing fire lines to begin establishing containment.

In addition to working with her crew for local fires, Giampapa and her crew assist with fires in other areas. Supporting the Nevada National Guard and other federal helicopter contracts, Battleborn Helitack has the opportunity to send crew out as a “single resource” as required. She attended a Helicopter Manager class at TMCC through the Wildland Fire Program that enables her to assist with fire disasters nationwide. Last year, this work took her to southern Florida.

“It was my first time on a fire assignment [like that], and I was so out of my element,” she said, explaining that fire conditions in other parts of the U.S. and the world are not the same as they are in the American West. “It was 100% humidity, it was raining and there’s still stuff burning on the ground.  I’m from the desert, born and raised in Reno, and I was like: what is this? But, it was cool to see the East Coast side of fire. Their season ends around June or July and that’s when our fire season is just getting started. So, that definitely keeps it interesting.”

Take Your First Steps into an Exciting Career

Giampapa, who occasionally helps with the hands-on training aspects of TMCC’s Wildland Fire Program, said that one of the program’s major merits is that it offers students a real-life glimpse into what this career entails while providing them with both the knowledge, skills and contacts to grow a summer job into a lifelong profession.

“The program is phenomenal because it can really give you an insight into what this job will be like,” she said. “I’ve had some folks on my crew and it’s their first season on the job, first fire, and their head’s down and I tell them to tie that line to the rock and they ask me: ‘what does that mean?’ And I'm looking at him like: what do you mean you don’t know what that means? We’re fighting an active fire!” 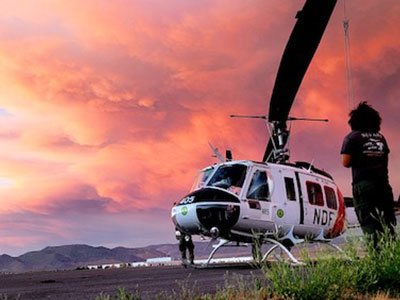 Students who complete the two-day Wildland Fire Program could find themselves flying in a helicopter alongside fire professionals like Giampapa.

This example is one of many for how the WildLand Fire Training Program can help new fire professionals succeed. “TMCC will not only give you the ‘how’s’ of the job, but will also introduce you to common terminology used in the fire world,” she said. The hybrid nature of the Wildland Fire Training Program provides students with the complete skill set required to be effective on the fire line, which includes knowing the equipment, how it is used and what it’s called. It also doesn’t sugar-coat or misrepresent the job.

“It’s hard, dirty work,” Giampapa admits. “It might not be everyone’s cup of tea, and that’s OK.” For her, the ongoing training and education offered by the Wildland Fire Academy are enabling her to continue progressing in a career she loves.

According to Munns, students can expect immediate benefits upon completing the program, which includes a lucrative, active, fun, and engaging summer job, as well as the opportunity to develop themselves into a public safety professional. Although not typical, students who are motivated to learn can follow in Giampapa’s footsteps and serve their first season from the air in a seat of a helicopter.

“Honestly, the beauty of the Basic Wildland Fire Academy is that you can complete the initial training to see if this is a career for you,” Munns explained. “And if it is, we can help you to take the next steps in your professional development, whether that means continuing in municipal departments, as an EMT or beyond.

Even though she’s a fully-employed fire professional, Giampapa continues to develop her skills by taking training offered by the Wildland Fire Academy.

“I look forward to taking these classes in the wintertime...because it helps me to keep my head in the game,” she said, explaining that the classes provide knowledge, skills as well as the opportunity to meet other fire professionals with whom she may one day encounter on the job. “It gives you a sense of comfort knowing these other professionals are out there...it definitely helps in a stressful environment and situation.”

Want to learn what it’s really like to wear the yellow uniform? Sign up for the Basic Wildland Firefighter 2 class that begins on Jan. 27 that could open a door into a lifelong profession... and passion.

For more information about TMCC’s Wildland Fire Academy, contact the program at 775-336-4270.