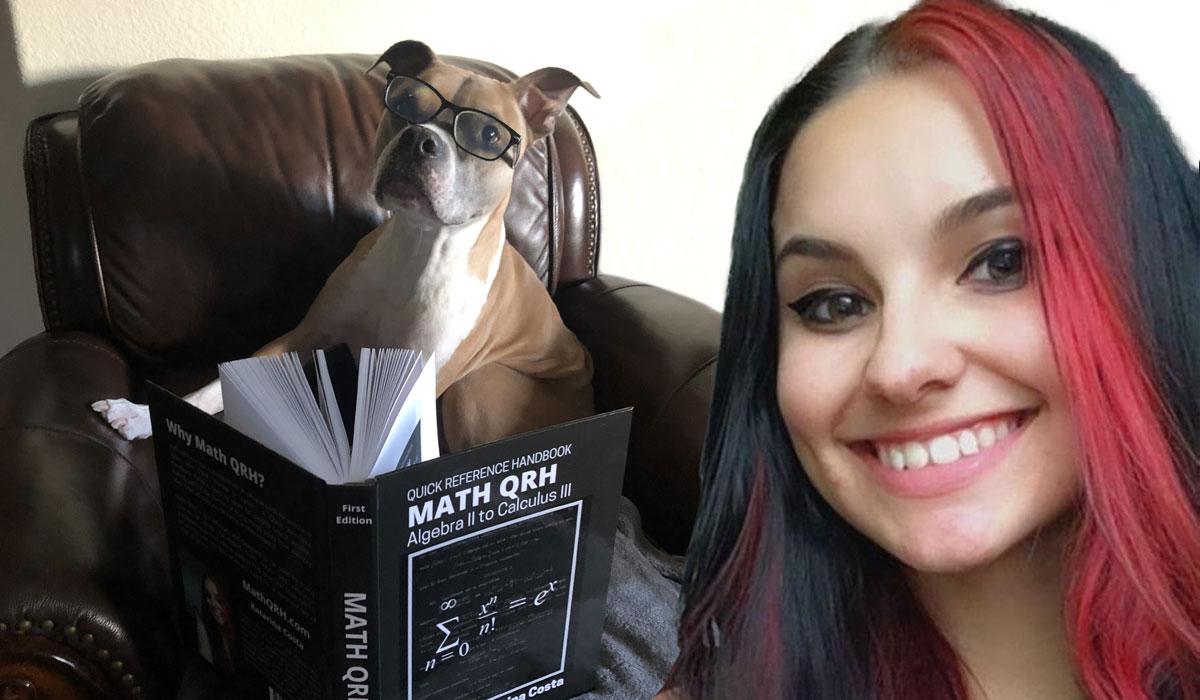 TMCC High School student Katarina Costa has written a book, called Math QRH, a resource guide for high school and college students in Algebra II to Calculus III classes. The name Quick Reference Handbook, or “QRH” was inspired by a type of document by the same name that is often kept in the cockpit of an aircraft that pilots rely on for quick reference. The QRH in the cockpit of an aircraft doesn’t replace the flight manual; rather, complements it. So too Costa’s Math QRH can complement other textbooks by offering a quick reference guide to key concepts.

The idea to write a book came to Costa in the Fall of 2020 in the midst of the COVID-19 pandemic. “I wanted to do something that was a bigger project, but I didn’t know what,” she remembered. “It was my first semester at TMCC when I realized I wanted to write a book.”

She began compiling her notes and summaries from math classes. However, she also realized that she also needed to offer her readers guidance through these topics and exercises. “So one night I just opened up my laptop and started typing my notes,” she said.  The result is a curated collection of sections that include main topics, definitions, and Costa’s tips and methods for solving certain equations. It took her one year to complete the entire manuscript for Math QRH.

“Really, this book is for anyone who is taking a math class, but it’s definitely more geared toward high school and college students because that’s what I am,” Costa said. “I want this book to make topics easily accessible because I know that math textbooks are sometimes hard for people to understand. They are written in very technical terms—and sometimes I don’t even understand them—and so I wanted this book to be something that was easy to read.”

In the process of writing the book, Costa admits that there are myriad ways to solve mathematical problems, and the methods she offers are only one possible strategy among many. Yet, as a resource for students who need support in navigating what can be a complicated subject, Costa hopes that her work sheds light on not only the solutions to problems but that the idea that finding one’s way to those solutions is within reach of every student if they are willing to put in the work.

“I didn’t recognize it was a book until I got my first copy of it, printed and hardcover bound,” she said. “I guess I was kind of in shock because I always knew that I had typed 400 pages on my laptop, [but that was somewhat abstract.] It wasn’t until it was published and printed—and when I actually held it—that I broke down in tears. I was like, oh my goodness, I wrote a book!”

Eventually, Costa hopes to write a second edition of Math QRH which offers deeper insight into different topics, such as differential equations. She also has an eye on revising some of her explanations to be more concise. Regardless of edition, though, Costa’s work comes from the belief that anyone can be proficient in mathematics.

In many ways, Math QRH is only the first step in what Costa sees as a long career that’s sure to add up to a lot of success. In Spring 2022, she will graduate with her high school diploma and an associate in science degree in mathematics from TMCC.  She plans on continuing her education, eventually pursuing a Ph.D. in Mathematics. Additionally, she is the recipient of the 2021-2022 College Board Scholar for the National Hispanic Recognition Program, a member of the National Honor Society and Phi Theta Kappa.

In addition to authoring Math QRH, Costa is also the founder and President of the first high school chapter of the Association for Women in Mathematics which she began at TMCC High School. The organization seeks to bring more women into the field of mathematics while educating others on the influence of women in the field. “The organization really focuses on trying to bring more diversity into math, which is really necessary. I also really appreciate their mission: they want to educate others on mathematics as much as they can.”

As Chapter President, Costa gives presentations to members on the contributions women and others have made to math that we often don’t hear about. “We don’t hear about women in math, and they were very much involved and they did do a lot of things in math like Emmy Noether, and Mary Cartwright, to name two examples,” she explained. She also gives presentations that are themed around seasons and holidays—around Halloween Costa presented on “spooky math”, and more recently a Christmas-themed presentation around the Koch snowflake, a fractal curve that describes and predicts intricate snowflake patterns that occur in nature.

In many ways, Costa strives to demonstrate that her passion—math—can be accessible to everybody.  “I hear a lot of people say that they hate math, and I want to draw people away from that mentality,” she said. “It’s a difficult subject. It’s not a matter of intelligence, either. I really don’t think I’m a math genius. I just love it, and so I do it more. If they are willing to put in the time, anyone can do well in their math classes.”

The team took Gold in the “Special Event Campaign” category, into which they entered their Commencement Communications Plan. This included communications about the unprecedented socially distanced, multi-day drive-through and live-streamed ceremony, a social media campaign, a landing page with greetings from various dignitaries and speakers, a series of branded news stories featuring graduates from every division and recorded videos between a student-intern and TMCC graduates.

“We faced so many communication challenges in the ongoing pandemic, and given that we canceled our commencement ceremony in 2020 due to health and safety concerns, we really wanted to communicate to students that their efforts are being recognized and that graduation still had meaning. The week-long ceremony was a huge success, and I am so thrilled that our dedicated team of communications professionals are being recognized for their tireless and consistent effort to promote the college’s mission of supporting—and celebrating—student success,” said Associate Vice President of Research, Marketing, Web Services and IT Elena Bubnova.

The MCO team in partnership with Web Services landed a Silver Medallion that recognized its excellence in the concept, build and design of the microsite that celebrates TMCC’s 50th Anniversary.

Additional Silver Medallions also recognized TMCC's vibrant Tik Tok presence, the stunning 2021 Viewbook and Excellence in Writing for coverage of the Fire Academy. Additionally, its unique and multi-platform campaign “The Students of TMCC” was recognized with a Bronze Medallion.

“With every project, our team focuses on reaching the audience and sharing our TMCC stories, and the projects that won Medallion Awards this year reflect that dedication. I’m very proud of MCO this year, and am honored to work with such a professional team,” said MCO Director Kate Kirkpatrick.