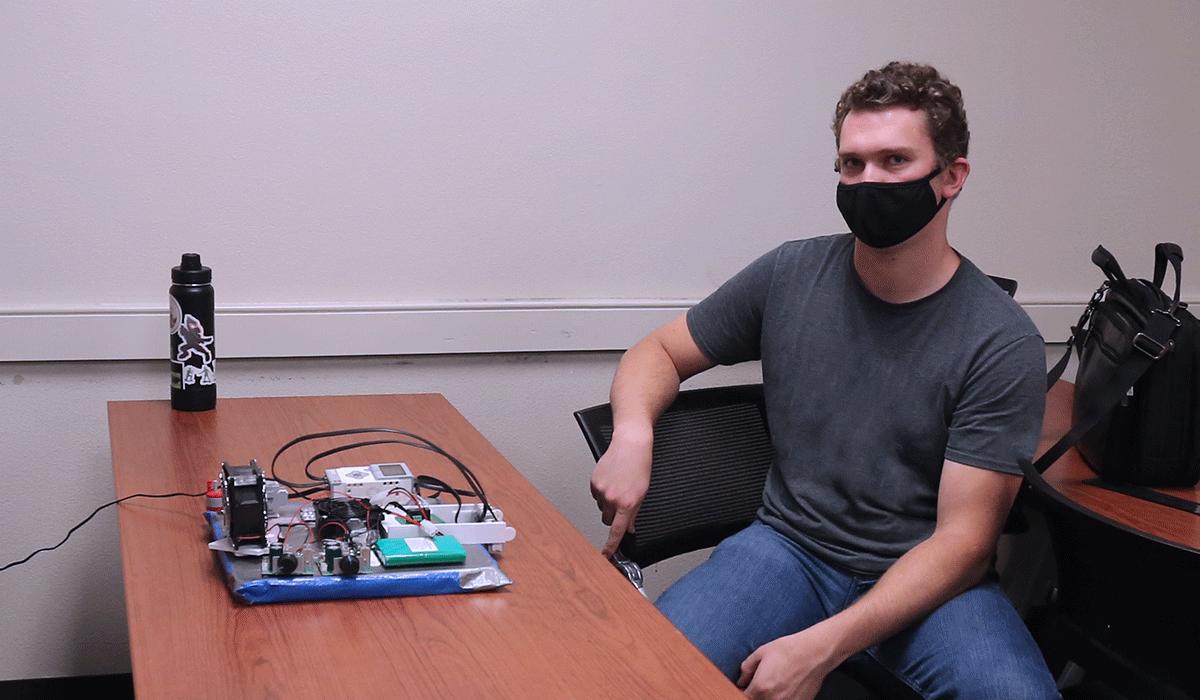 What’s blue with a small programmable computer, has a high-screeching-hum and hovers across surfaces? This is the “Blue Banshee,” a hovercraft created by a team of students in TMCC Engineering Professor Daniel Loranz’s Engineering 100 class, an introductory design course intended to teach the hard and soft skills students need to continue their journeys within the field of engineering.

Andrew Wischer is one of four students on the Blue Banshee team. An engineering major, Wischer has his sights on a career as a Mechanical Engineer, has found value in this class that has taught him several skills, including soldering, robotics, circuitry, the properties of lift and propulsion, as well as several soft skills including teamwork, organization and giving oral presentations explaining his design and problem-solving processes.

Mere weeks before the final test run for the hovercraft, however, Wischer and his teammates are trying to get their creation to move forward in a straight line.  They’ve mostly got it down, although when the humming craft passes over the space between two tables, it turns slightly to the right. The four students on the team worked together, adjusting the calibration of the fans to see if this addressed the problem.

Loranz, who recently restructured the class to include additional lessons on specific skills students need to build a functioning hovercraft, said that the semester-long hovercraft project might be the student’s favorite, but it’s more of an exercise in getting students to engage in all the tasks associated with being a professional engineer. This includes not just the design, building, and problem-solving, but also record-keeping, organizing information, meeting deadlines, and giving presentations about their work and process.

As students embark on the hovercraft project, Loranz guides them through a series of checkpoints that require each group to reach and record specific milestones. These include generating ideas for the hovercraft’s design, budgeting for the materials to build the hovercraft, and then, of course, the business of building and perfecting the design so that it can perform the final task: the hovercraft needs to follow a black line on a low-friction platform independently from start to finish.

“All the groups are given certain supplies to begin with,” Loranz explained. These include a simple programmable computer, wiring, and light sensor. The rest—the hovercraft platform, fans, and any additional materials—are the result of the student-driven design process and have to be budgeted for.

The newly restructured class also includes mini-projects that help students to develop the skills they’ll need for the larger hovercraft project as they wait for parts to arrive. One skill that was recently added to the course was a project that taught soldering: a skill that Loranz describes as one that is difficult to master, but one for which the basics are easy enough to learn. In putting together a simple flashlight, students learned to solder well enough to complete the larger hovercraft project.

Wischer and his team all agree that the class has taught them several skills through a highly interactive hands-on experience that differs wildly from what they experienced in high school. “It’s definitely been a challenge to work together, and to practice problem-solving,” he said. What is clear is that the fast-paced class is preparing him for a career through the skills he and his classmates are learning.

This is by design: Loranz explained that even though many of the students grow attached to their hovercraft projects, the end result isn’t the sole determining factor in their success or failure in the class. In addition to all the hands-on skills, students are also tasked with keeping detailed accounts of their project’s evolution over the course of the semester. Their final report—and the quality of that record-keeping and organization—is the point.

Granted, the students on Team Blue Banshee, which include Nick Reddicks, Luke Archer and Bobby Jovel, see value in the lessons delivered by their blue hovercraft whose platform is constructed of blue tarp, duct tape, and insulation foam.

“It’s been a great experience to work on a team on this project,” said Reddicks. “We’re learning to do a little bit of everything: soldering, robotics and working with circuits. It’s definitely a fun class.”

For more information about studying engineering at TMCC, contact the Physical Sciences department at 775-673-7183.