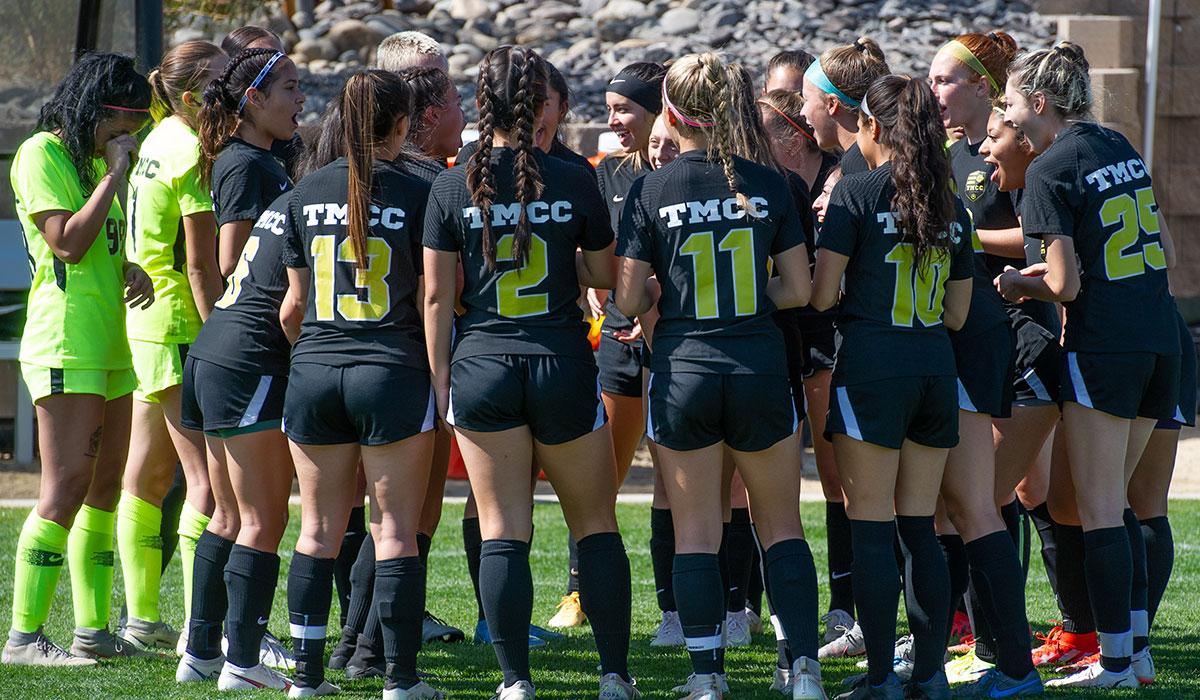 The 2021 season came and went—for both squads—with a number of exciting highs and tough lows. For TMCC’s men’s team, while they were left on the outside looking in, they put together repeated  strong showings against the conference’s best teams. The women’s team, by contrast, were as resilient as any team in the Scenic West, putting together a great second half after a few tough breaks to start the year. Overall, fiercely competitive rosters, perseverance, and a never-quit mentality defined the 2021 season.

TMCC’s men finished their third-ever season of play with an overall record of 8-7-1, the best mark for the program since the inaugural 2019 squad reached the 10-win mark. The Mighty Lizards netted 21 goals on the season while conceding 22, and recorded six shutout performances.

The efforts of an outstanding defensive unit headlined almost every match for TMCC. Led by sophomores Ryan Rutherford, Jacob Duran, and Erick Ceja-Gonzalez—who earned All-Region 18 honors for the third season in a row—the Mighty Lizards conceded and gave opposing strikers resistance at every turn. Conceding just 22 scores on the season, TMCC recorded six shutout performances, a mark higher than any other squad in the Scenic West Conference. “The defense this season was very strong,” said Coach Geoff Hawkins. “Overall, we had a strong game plan from front to back that created pressure all over the field well.”

Never Out of It

In part due to their defensive prowess, TMCC’s men seldom found themselves out of a game. Of their 16 matches this season, just over half of them were decided by one score or less. A strong showing in a 1-0 loss to Salt Lake Community College, while tough, was a great example of their competitiveness and ability to keep up with some of the best in the nation. “Every time we walked on the field this season I thought we had a chance to win,” said Coach Geoff Hawkins. “The top of our conference is very strong, and I think in a different year the standings could have been completely different.”

In those one-score matches, the Mighty Lizards recorded five wins, four losses, and one draw- a figure that looks to give some important high-leverage experience to many of the team’s returners for next season.

Retooling for the Future

Looking ahead to 2022, the Mighty Lizards will lose ten outgoing student-athletes. For Coach Hawkins, filling those vacancies on the roster will be the primary focus of the offseason. “We’re losing a lot of experienced talent this year,” Hawkins said. “But replacing key players is a regular part of the two-year college level, so we’ll be hitting the recruiting trail hard and are confident we can put together a great team for next season.

In addition, developing the Mighty Lizards existing core—which showed plenty of promise this season—will be a major focus. Building on the contributions from many of 2021’s new additions, including forward Jaden Roig, midfielder Oscar Villasenor, and others will be a major part of offseason training sessions.

How About Women’s Soccer?

Women’s soccer rebounded from a challenging Spring campaign well this fall. After a tough start to the season, TMCC’s Women put together an excellent second half that saw them win four of their last seven- and improve every time they stepped on the field.

TMCC’s Women finished the 2021 season with a record of 5-8-1. They set a new program record for wins in conference play, doubling the two victories in each of the first two seasons of TMCC soccer. For the year, Women’s Soccer netted 22 goals while conceding 22, and took their first-ever wins over three conference opponents.

The early parts of the season were tough for the women’s team. After a promising road trip to open the season, the Mighty Lizards were thrown a number of tough breaks in what became a six match winless streak. Nail-biting defeats to Utah State Eastern, Community Christian, and Southern Nevada overshadowed what were excellent performances, with each match undecided until the final minutes

Despite the tough first half, they never gave up. TMCC rebounded as the calendar turned to October, rattling off four wins in five matches from September 25 to October 9, and finished the season victorious in four of their last seven. A two game road trip that resulted in a 5-0 win over Community Christian and the first win in program history over in-state rival Southern Nevada took the spotlight, showing what the squad was truly capable of.

“I was very proud of how our women persevered this season,” said Hawkins. “As time went on we got tougher, harder to score on, and showed immense growth.”

A number of new pieces entered the year with much to prove: the Mighty Lizards had 15 new players to integrate on the women’s side. As the season progressed and the tough results turned to positive ones, those new faces started to shine. “Without the development of the first-year players this season, I don’t think we have the success we did in the second half,” said Coach Hawkins. “They had a steep development curve, but the returners really helped them out and a number of them surprised me in great ways.”

That improvement allowed players from all over the roster to turn in some great performances as the season went on. Three of TMCC’s women, sophomore Emily Mendoza-Obeso, and freshman Stella Poste and MaKensie Turner, took home the Mighty Lizards first Conference Player of the Week honors since the inaugural season, while first-year players Katelyn Norris and Jenna Bosetti became stalwarts in the starting eleven.

In 2022, the Mighty Lizards stand to benefit from their first normal offseason. Be it in recruiting or player development, a more traditional nine months ahead will give TMCC’s women a lot of time to adjust, improve and add to a squad that will enter its fourth season with a great deal of confidence.