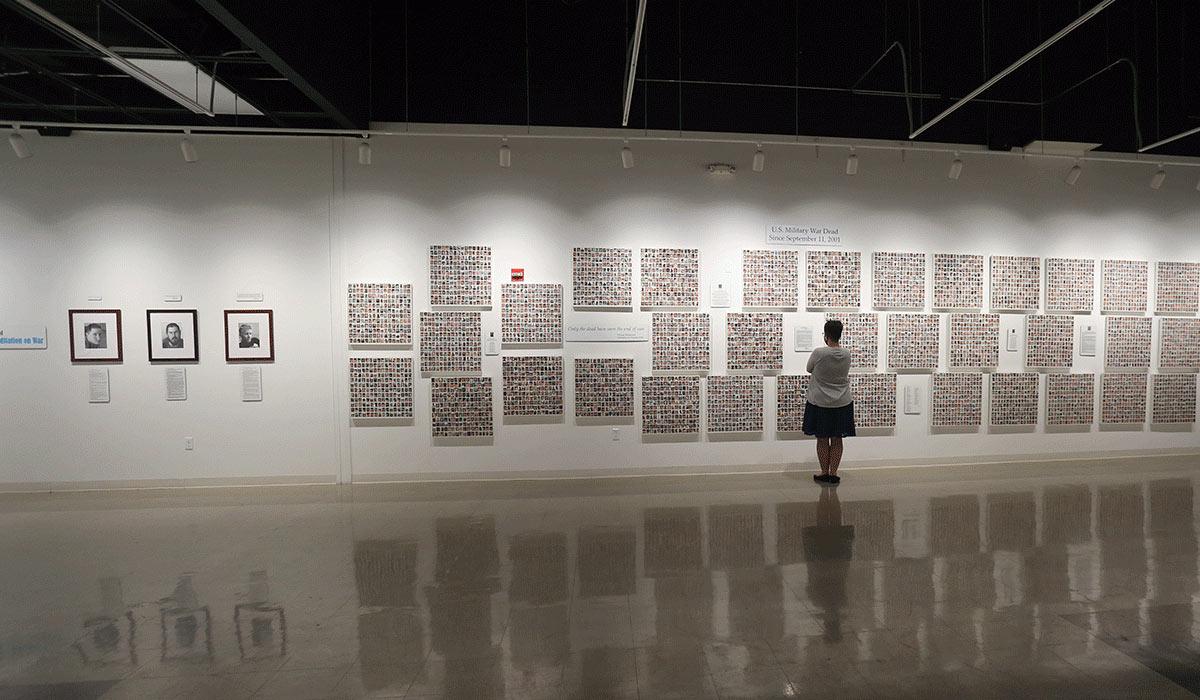 Thanks to a collaboration between the Veterans Resource Center at Truckee Meadows Community College, Western Nevada College and VFW Post 2313 in Hawthorne, “Always Lost: A Meditation on War” is once again on public display, for the first time since 2016. The exhibition is dedicated to U.S. military service members in the Iraq and Afghanistan wars who gave their lives, as well as to those who made it home.

The public can view the exhibition at the Main Gallery in the Red Mountain Building on TMCC’s Dandini Campus between 8 a.m.–5 p.m. from Sept. 8–22. There is an opening reception scheduled for Wednesday, Sept. 15 from 3–7 p.m.

The exhibition, which began as a creative writing class project at WNC’s Carson City campus in 2009, had been previously displayed at more than 50 venues across the United States.

In 2008, WNC professors Don Carlson and Marilee Swirczek decried the impersonal nature of the Iraq/Afghanistan wars, Operation Iraqi Freedom and Operation Enduring Freedom. They envisioned a photography and literary exhibition to personalize these wars which would include original literary work by students, veterans and their families, and other Nevada writers. The project also included the “Wall of the Dead,” individual photographs with names of U.S. military service members who perished in the Iraq and Afghanistan wars from Sept. 11, 2001–14.

The Dallas Morning News granted permission to use their 2004 Pulitzer Prize-winning Iraq War combat photographs as part of the exhibition. Photographs and profiles of three WNC student veterans remind us of the thousands of service members returning home from war, and original poetry by Army SPC Noah C. Pierce, who died by suicide after serving two tours in Iraq, shines a light on the epidemic of veteran suicide. Throughout the years, the Wall of the Dead continued to grow. When “Always Lost” made its debut, there were approximately 4,000 faces and names on the Wall. Today, there are nearly 7,000.

During its seven years of travel, “Always Lost” was displayed at colleges, universities, libraries, veterans’ organizations and community centers across the nation. The Minnesota Humanities Center sponsored an 18-month statewide tour of the exhibit as part of their “Veterans’ Voices” program, and a second copy of the exhibition traveled across Nevada as an official NV150 Sesquicentennial exhibit on a tour sponsored by the Nevada Department of Veterans Services.

“Always Lost: A Meditation on War” has been funded and maintained through grants from the Nevada Arts Council, a division of the Department of Cultural Affairs and the National Endowment for the Arts, and Nevada Humanities, along with generous donations from organizations and individuals. This support made the traveling exhibition possible.

For more information about current and upcoming art exhibitions at TMCC, contact the TMCC Art Galleries at 775-673-7233.