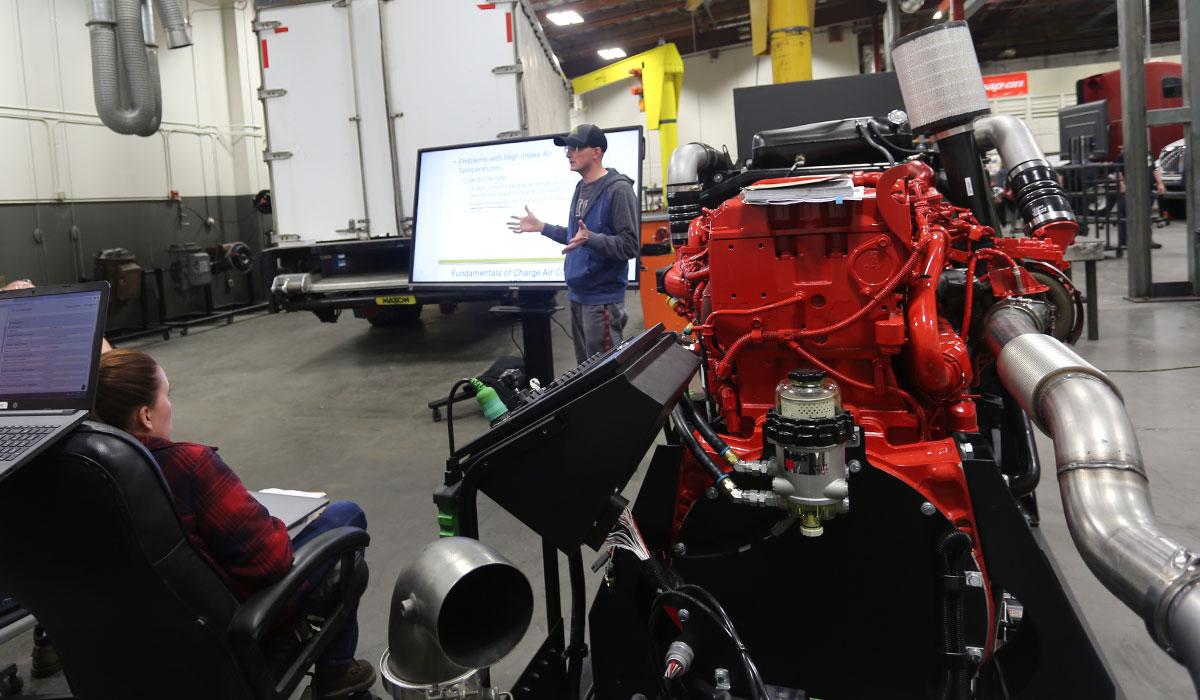 The Diesel lab at the William N. Pennington Applied Technology Center is a large, open space in which six large semi-trucks sit immobile for the five-week class sessions in which students in DT 106 (Heavy Duty Transmissions and Power Trains) repair and reassemble the large transmissions before hoisting each back into the appropriate engine cavity. According to Diesel Instructor Kyle Smith, the true test of a students’ success happens after all of that: if the truck can be driven out of the shop, the student passes the class.

“[In this class, students] take a live transmission out of a running truck.  Then, we take out the clutch, the flywheel, and we talk about how it all works, and how to diagnose issues. And then, we put [the transmission that the students re-assembled] back in the truck. And, if I can’t drive the truck, you don’t pass the class,” said Smith. “That mimics real life—if you can’t [successfully] replace the clutch in the shop, you’re going to get fired because the shop needs mechanics who can do the work.”

Last year, Smith joined Diesel Instructor Jeremy Coggin as one of two full-time instructors in the program. Both instructors came to TMCC directly from the industry where they worked for several years as professional diesel mechanics and diagnosticians. Despite the challenges of teaching during the time of COVID-19, both are continuing their work with students and revising a program that, in recent years, had fallen behind in technology and industry standards.

“Ever since I started, Jeremy and [I] want to be the top community college diesel program in the US.  If not that, then we will settle for the top ten,” said Smith. “That has been our goal since day one. And we’ll get there. When we say we’re going to make something happen, we’re going to make it happen...which also comes from industry. When you’re given a job, your boss expects you to get done and figure it out. They don’t want you to come back with excuses. They want you to produce results. And, that’s where we come from and that’s how we work.”

Although Smith, along with Coggin, is taking the lead on educating students in the intricacies of repairing large diesel engines and heavy duty trucks, that wasn’t his initial career path. “I have a degree in biochemistry, and I actually taught middle school science for several years,” he said.  Smith left the Reno/Sparks area for Texas. After two years away, he returned to a hiring freeze. “I couldn’t get a job,” he remembered. “I couldn’t even get my substitute license reactivated.”

Luckily, a family connection led his career in an unexpected direction. “I’ve always enjoyed working with my hands—and when I was younger I’d always talk with my brother and say: ‘maybe one day we’ll own an auto shop.’ I was always a driveway mechanic, but I had no actual training so I just thought it was one of those dreams we’d always talk about.”

However, when a family connection hired Smith to be a mechanic at their trucking company’s maintenance program, that dream quickly became a reality. “I just started fixing tires and changing oil and literally just slowly progressed from there,” he said, but he set higher goals for himself that included a return to a classroom—albeit one that replaced beakers and bunsen burners for transmissions, clutches and flywheels.

“When I started in the industry, my goal was to end up teaching… and honestly I thought I was looking at another 10–15 years before that opportunity would happen.” Yet, when Coggin reached out to Smith with an opportunity to teach in TMCC’s Diesel program last year, it was as though he ended up exactly where he should be: training students to do the hands-on work that he finds fulfilling.

“I love this environment... Even though I’m the teacher, I’m still learning things as I go through the material, or trying a different approach, or I bring up a question I never thought about before, and we investigate it as a class. It’s very fun...and I love what I do,” he said.

Smith, who describes himself as “an engine and proprietary transmission guy” admits that teaching students about engines is his favorite part of the job. “If you ask Jeremy, he’ll probably say the same thing. We both love the complexity and intricacies of engines—they don’t always behave like they should,” he said.

Outside of “just” engines, Smith loves teaching DT 106 where students work in-depth on the transmissions in diesel trucks. “This class gives students just enough room to struggle and learn, and it helps them to get that lightbulb to come on. The best part is seeing them be able to do this huge job and... at the end realize that they didn’t think they could do that, but they could...and did.”

Students who enrolled in DT 106 this past semester had a very unusual version of the class, and not just because of the new social distancing and cleaning protocols due to COVID-19. “The instructor who was teaching the class last spring had just pulled out all the transmissions when the move to remote operations happened,” explained Smith. “We didn’t get back into the lab until just before classes started [in the fall]…. And we had six trucks with transmissions on the floor and I had six students. So, each student got their own truck. That was the most interesting class I’ve taught so far, or will probably ever teach.”

Typically, students work together in small groups, with each group assigned to a truck. This time, though, each student would have an entire truck—and its idiosyncrasies—to themselves. “I told them this class will be different than any other class you will experience. Taking a transmission [out of a truck] and putting back in is hard. Walking up to a transmission and a vehicle you’ve never worked on and having it in pieces all over the place and being able to put it back together by yourself... well, that takes a lot of work,” Smith said. “But it mimics real life in the industry, and it was fun to see them struggle through that.”

Needless to say, at the end of the five-week class Smith was able to drive all six trucks with the transmissions his students had reassembled and repaired.

Smith and Coggin have been hard at work restructuring and revising TMCC’s diesel program and curriculum to meet the needs of the contemporary industry that better prepares students for what they’ll face as they enter the workforce. This involved restructuring existing courses as well as adding a few new classes to the roster. After these changes were made, students now have the opportunity to earn up to four skills certificates in the program, as well as two new Certificates of Achievement, which are 30-35 credits (roughly one year), which both include the electrical and basic skills.

They’ve also added classes to the two-year associate of applied science degree to better organize what students learn so that lessons correspond to what the industry expects of entry-level mechanics. This included adding an “Introduction to Diesel” class in which students learn how to shift a manual transmission in these large diesel trucks. “It’s surprising how many heavy-duty mechanics don’t know how to drive a truck into the shop when they need to fix it,” said Smith.

The program has also acquired new technology that has made the in-person lecture and lab components of its classes more effective and engaging. The program now boasts two smartboards, and each is hooked to a 65” screen. “This helps….so as we’re going through the lecture portion [of the class], we have the lecture on the screen, a diagram on the smartboard. In the automatic transmission class, we had hydraulic power flows up on the screen, and the students came up to draw the different hydraulic flow paths for different clutch engagements for different gears in vehicles,” said Smith. “It helps the students to sit down and talk about the theory behind it. They’re not going to remember it [exactly]...but what we’re teaching them is that if you’re troubleshooting an automatic transmission and it’s doing X, Y and Z, where do you need to go to find the problem? Students learn to go to the literature and find what they need to figure the issue out. Using the smart boards and [additional screens] really helps that because it takes the written literature and makes [learning] more interactive.”

The program has also partnered with manufacturers in the industry who have given access to their online proprietary training, as well as a number of code scanners and OEM equipment that can be hooked up to the equipment in the diesel lab.

“We’re starting to form partnerships with companies who want to support our program. We just got a free laptop and diagnostic software from J-Pro, which is in partnership with Pepsi. They’re going to come to our campus to do presentations to our students and hopefully to support us more in turning out students that they can use on their medium and heavy-duty equipment,” said Smith.

The value of offering not only high-quality training, but highly relevant training can’t be argued, said Smith, who knows firsthand what it’s like to enter the industry with no formal training to speak of. “I had a four-year degree that taught me how to learn, research and figure things out, but... I struggled a lot. So, the students who come here—I’m not going to lie, our program is very challenging, especially in our 5-credit classes—but they will get more [training and knowledge] in one year in this program than I got in four or five years as an entry-level mechanic. We’re teaching them where to go to remind themselves of what we taught them, and where to go to figure out the problems they’ll encounter,” Smith said.

Working as a mechanic in the diesel industry is a profession that’s rife with possibility as much as it is with work that can be physically demanding. Smith and Coggin, though, are building a strong program that will teach students skills, knowledge and resilience that will prepare them for bright futures.

“We want students who go through this program to change the face of mechanics in the industry. We’ve seen a lot of mechanics that just don’t care...but [our students] can start changing the shop environment to a place where mechanics want to do a good job, and they want to hang their hat on the quality of their work,” said Smith.

As the program continues to develop, adding industry partners, advanced technology and targeted classes, the value in this opportunity for students who don’t mind a wrench is undoubtedly there. “If anyone disagrees, tell them to talk to me,” Smith said. “I was a grease monkey who didn’t have this training. I know the value of having this training from two instructors who know what they are doing. We also love being here in this environment. We are totally invested in the students. We sometimes take extra time or work with things in a different way to reach out to these students because we know the value of the training. If you train a person properly then they’re going to be able to be a benefit wherever they work.”

Teaching the students—doing this job he loves—Smith is providing TMCC students lasting value in a profession that shows no signs of slowing down.

For more information about the Diesel Technologies Program at TMCC, contact the Applied Technologies department at 775-856-5300.