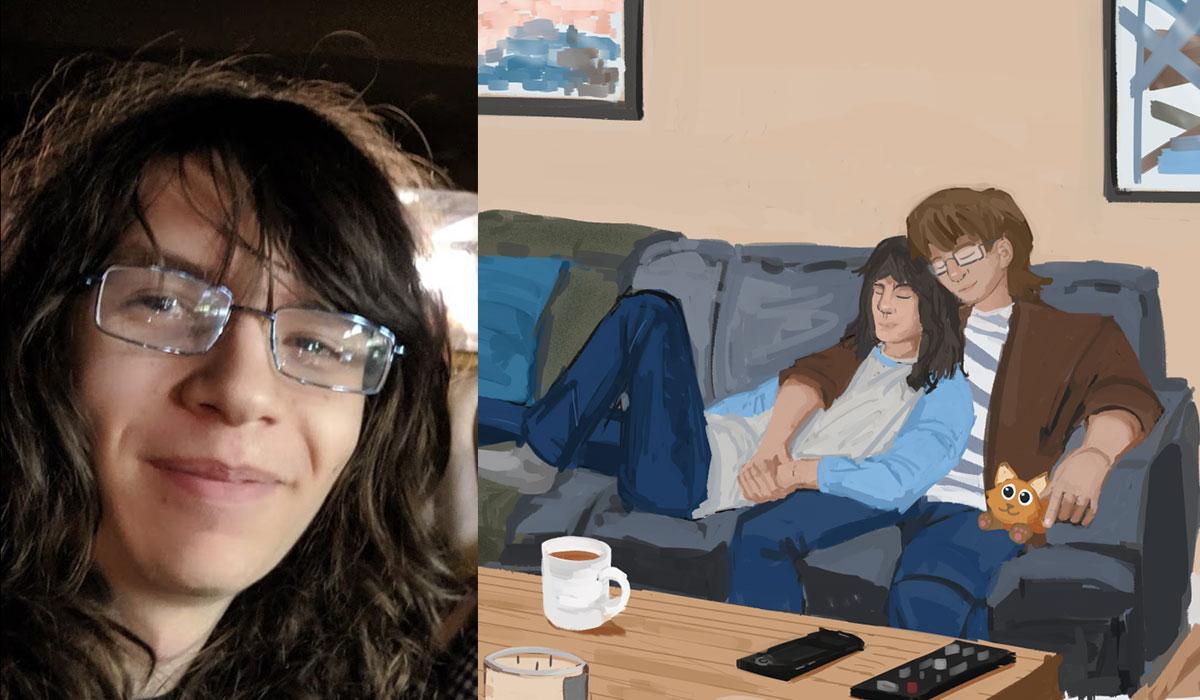 I think that everyone has potential, and they should always try and do what they want to do. Nothing is out of your reach if you just keep trying. And even if there are things that hinder you, you can move forward and accomplish what you want to.

Aidan Martyniuk is a Fine Arts major at TMCC who will earn his associate degree at the end of the 2020 Fall Semester. Martyniuk, who is originally from Reno, has been interested in art since he was a child, but was inspired to pursue art academically and professionally by friends who were artists.

While digital artwork is currently his preferred medium, Martyniuk also enjoys working with conté, graphite pencil, and acrylic paint, the latter he discovered in Painting I, his favorite class at TMCC. “It was the first time I started painting with acrylics. I got to experiment and I learned a lot... [Art Instructor] Rossi Todorova introduced me to this kind of layering called ‘indirect painting’ and ...I made it more like watercolors and I was just really interested in that kind of look.”

Even though Martyniuk’s degree emphasis is on drawing and painting, he sees a future career in digital artwork.  “I want to go into some kind of illustration. I’m really drawn to making stories, characters and scenes. That’s what I’ve been focusing on this semester in my Portfolio Emphasis class, where I’m working on stories that revolve around the theme of belonging,” he said. There are two stories that Martyniuk has developed into a series of illustrations. 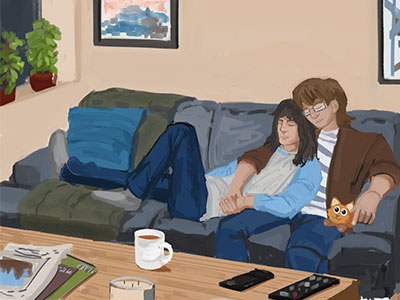 This illustration comes from a series in which Martyniuk explores belonging.

One series of illustrations expresses the sometimes unexpected ways that we can find a place—and a person—where and with which we belong.  The second story explores an almost opposite narrative of how the search for belonging can remain unfulfilled.

Of his process creating these illustrations, Martyniuk said, “I think about the concept and put it into a story. I haven’t written it so much as I’ve put it into the work itself.” In the first series of works in which the main character finds where he belongs, Martyniuk uses darkness and light to convey the emotional tone of each scene. He also weaves a thread of comfort into each scene through the repeated presence of a small, orange fox.

In the second series, in which Martyniuk’s main character is a stray dog, he relies on body language and facial expressions to convey the emotional tone of each illustration. “Dogs typically don’t show much expression in their face, but I couldn’t help but humanize them [in this project],” he said. 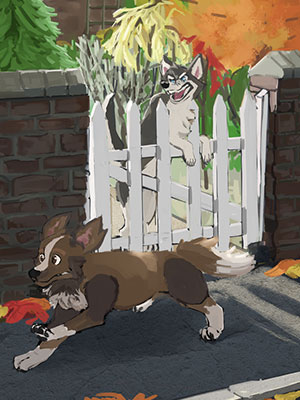 This illustration comes from a series in which the main character, a stray dog, cannot find a place where he feels he belongs.

The Portfolio Emphasis class is offered every Fall semester and challenges students with creating a cohesive body of work in their portfolio as well as accompanying marketing materials such as a website, flyers, and business cards to promote their art. Each student must also complete the semester with an exhibition in one of TMCC’s many art galleries or in a venue in the community.  Students typically cite the class as one that is both challenging and incredibly rewarding. This, for Martyniuk, is no exception.

“Portfolio Emphasis and my Painting II classes were difficult...and it’s just been a lot of work,” he said. In addition to the challenging workload, Martyniuk faced another considerable challenge: recovering from COVID-19 which Martyniuk contracted before the semester began.

“Initially, I just didn’t want to [enroll in classes while I was ill.] I was just not ready to go back to college this semester. But, I realized that if I didn’t do this now, I’d have an entire year of doing nothing. I didn’t want to be hindered because of an illness. It’s been somewhat problematic initially because of the illness and its symptoms... but I didn’t want to stop my education because of something I couldn’t control.”

After completing his classes in December, Martyniuk admits he’s looking forward to taking time to himself to recover fully before looking for a job. He plans on continuing his education in art at UNR when the pandemic subsides.

His advice to other students? Don’t give up on your dreams even if circumstances turn difficult.

“I think that everyone has potential and they should always try and do what they want to do,” he said.  “Nothing is out of your reach if you just keep trying. And even if there’s things that hinder you, you can move forward and accomplish what you want to. I’ve been through a lot in my two and a half years at TMCC, and I just kept going.”

For more information about Martyniuk’s art, see his website.

For more information about studying in the Visual and Performing Arts at TMCC, contact the department at 775-673-7291.