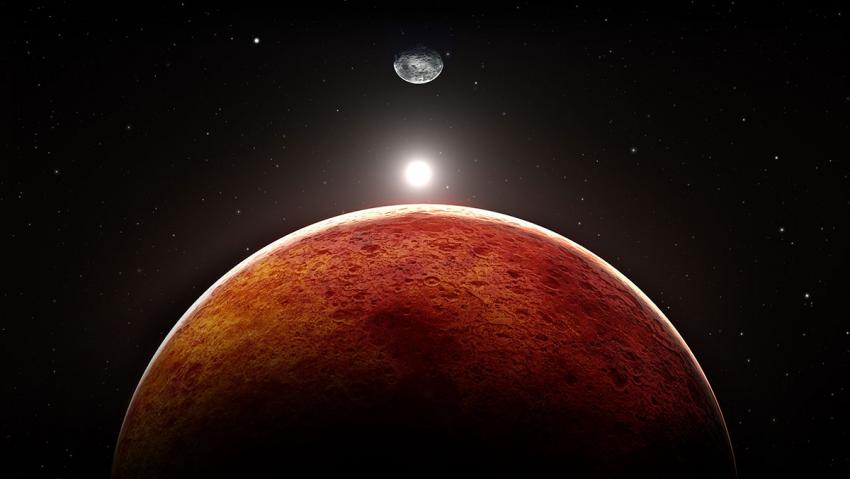 Math Professor Kurt Ehlers said this summer he’s fielding questions about Martian sunsets. These questions, he said, are fueled in part by images taken by the Mars Rover. “You run into those images a lot on astronomy websites,” said Ehlers. “Plus, there’s a lot of talk of sending another Mars Rover Mission—and [perhaps] also sending humans to Mars, so I think there’s a lot of interest in Mars all over the world. These images capture peoples’ imaginations.”

Much of the focus of these conversations is the color of a Martian sunset, which is blue. One recent article that cites Ehlers said that the color of a planet’s sunset depends on what composes a planet’s atmosphere, and how those particles scatter its sunlight.

In 2014 Ehlers, who was a part of a team of scientists from the Desert Research Institute, was working on a project focused on the optical properties of dust in the desert. “It was a project that the U.S. Army was actually interested in. Well, as it turns out a lot of the dust in the desert is red—like in Utah, and you see all the red rock—you get an iron-oxide mineral dust. We were studying the optical properties of that.  We ran across these photographs of the Martian sunset, and the dust on Mars is iron-oxide-containing dust, just like a lot of deserts on earth are,” he said.

Elhers and his team utilized the data sent by the Rover mission on the composition and size of Martian dust to come to a sound explanation for why Martian sunsets appear blue. "On Earth red sunsets are caused by the scattering of blue light (the sky is blue!) by atmospheric gases that dominate the atmosphere,” Ehlers said. “The Martian atmosphere is dominated by dust particles that scatter red light and absorbs blue light in equal amounts. This dust makes the sky appear to have a mustard color. The blue sunset on Mars is not caused by the removal of red light, which is the common, but incorrect, explanation. Rather, it is the pattern of scattering from the dust particles that causes the blue sunset. Blue light is scattered from dust particles in a very narrow, concentrated beam in the forward direction while red light is scattered more widely. This concentrated blue light causes a blue glow surrounding the sun on Mars, especially at sunset.”

This isn’t exactly the kind of scholarship Elhers typically investigates. Instead, he’s known for his work in biophysics on molecular motors and how things move at small scales; yet, he said that the mathematical principles that underlie his investigations both small (molecular) or large (sunsets) are the same. “I study these things because... I just enjoy trying to figure out how nature does its thing. And I think that’s a good way to look at it. You just stay curious.”

Elhers was the lead author of a 2014 paper in the journal Applied Optics which explained why Martian sunsets are blue. Since, he has contributed to several YouTube videos on various science channels on the same topic, and most recently, he was featured in a documentary on this topic produced by a TV station in Russia.  Additionally, Elhers has an invited article on the same topic due in a few weeks to the European Journal of Physics.

The direction of his scholarship—and his teaching—are investigations into the world around us, encouraging students to look at the world in new ways. “I think we try to make our students curious about things they might not necessarily notice, that might pass by without them looking closely at [them].”
Things like sunsets, both near and far.

Are you an English Language Learner looking for a stable career that requires you to use problem-solving skills? If so, we have good news: TMCC’s Adult Basic Education Program is once again offering qualifying applicants the opportunity to start a career as an HVAC technician while improving their English language skills... for free.

The semester-long program will be offered 100% online and will begin on August 24. “The course has changed a little bit from the first semester,” said ABE Transition Coordinator Debi Pezzuto. “It will still be free, but will now be funded by the community agency, JOIN Inc.” Also, for students who are unemployed, on SNAP/TANF benefits, or are considered “low income” will qualify for funding throughout their entire HVAC skills certificate.

In addition to free tuition and a free English class, the program also enables participants to work with Pezzuto on obtaining scholarships and financial aid in order to continue your HVAC/R education.

The classes will be offered Thursdays from 5:30–8:30 p.m. Participants will also be required to attend a small number of in-person labs (which will be by appointment only.)

Pezzuto encourages anyone who is interested to apply for the program right away. The application process is simple: simply submit an application that includes a form and a short essay that outlines the reason why you’re interested in a career in HVAC and pay for your books and supplies.

This program is not only for “college-aged” students; anyone who is an English Language Learner and who is interested in learning more about HVAC/R can apply.

For more information—or to obtain the form needed to apply to the HVAC ELL program—contact Debi Pezzuto, College and Career Transitions Coordinator for TMCC’s Adult Basic Education Program, at 775-829-9052.