Interactive Panels Take Learning to the Next Level 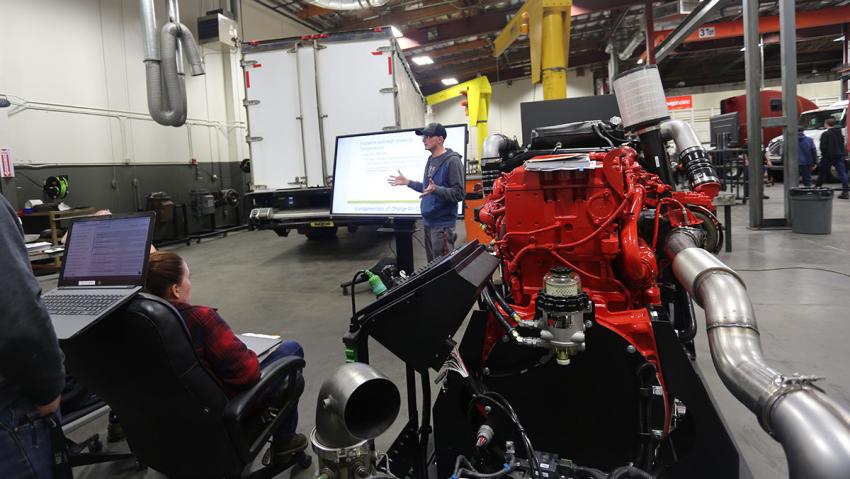 Students in Jeremy Coggin’s Heavy Duty Drive Trains class know that when they sign up for this 5-week intensive class, they will be spending lots of time with semi-truck transmission, differentials and associated components, learning how they work and how to diagnose problems when they don’t. What they didn’t expect was how technology is changing not only the industry but also the learning environment in which they will develop these skill sets.

“You can’t just be a guy with a wrench anymore,” said Coggin. “The industry requires that you are half-mechanic, half-computer science expert. The engines of today are deeply integrated with technology.” So too, are classrooms. Last week, the William N. Pennington Applied Technology Center received its first Interactive Panel. It’s one of two units that TMCC’s Technology Committee and IT Department are piloting to determine whether or not this new technology is the next step beyond the traditional whiteboard.

“This class is a big deal for these students,” said Coggin. “We used to just take transmissions apart, but now we pull them out, diagnose them using the diagnostic technology. Then, when the transmission has been repaired, we put it back in the truck.” The interactive panel displays Coggin’s lecture notes, PowerPoint presentations, and instructional videos. More impressively, though, it can be connected to the vehicle and display data in real-time, so students can see how particular systems work in detail.

It can also play simulations, showing the “innards” of an engine, enabling students to conceptually walk through the steps of their lab work before getting their hands dirty.

Interactive Panels: The Future or Foe?

At the Dandini Campus, Sociology Professor Marynia Giren-Navarro is piloting an interactive panel in her Ethnic Groups in Contemporary Societies (Sociology 205) class. The panel sits to the left of the whiteboard and at first, Giren-Navarro uses it as a whiteboard to convey the details of an upcoming class field trip.

Once the students are settled in their seats, she switches the screen to display a glossary of terms covered in the previous class.  She asks students to cross out terms they feel they’ve mastered and to circle others that they’d like defined again. The board has up to ten “touchpoints” so students don’t have to wait in line, which was one reason why Giren-Navarro was interested in trying this new technology. “I thought it would enable me to get students out of their seats and interacting with the material in the class more efficiently,” she said.

Giren-Navarro uses the responses on the screen to direct the brief discussion. For terms that students felt comfortable with, she asks for a concise definition. For those with circles around them, such as the terms “counter-culture” and “secessionist minority,” she returns to the white screen where she can further refine the subtle differences of the ways in which groups of people are separate from mainstream culture.

After reviewing vocabulary terms, Giren-Navarro puts the students into groups and tasks them with ordering the top nine religions in the world and in the United States from the most widely to lease widely followed (with the reminder that they can’t just google it.) There’s a list of the religions in no particular order on the panel. Once groups finalize their list, they send a “reporter” to the board to record their hypothesis.

“I would love it if the students could just drag and drop the terms into the order they want,” she said. “But, so far, it doesn’t seem to work that way.” The Interactive panel runs on an android platform, and you can download apps to perform different functions. Giren-Navarro, who uses an android phone, anticipated a learning curve when using the new technology but has been surprised at how much additional work the technology has required of her.

“I always like to develop new exercises and activities in my classes, so a part of it is my fault,” she said jokingly but admits that some functions of the interactive panel aren’t exactly intuitive.

Thomas Dobbert, Chief Technology Officer, said that this was one reason to pilot this particular piece of equipment with a few instructors before investing more widely. “The instructor must be willing to find the time to incorporate the panel into their class. It really is a new technology, and it shouldn’t be used as just another monitor to display a PowerPoint presentation,” he said.

Students in Giren-Navarro’s class see the value of the technology as much as they see the difficulty in using it. They appreciate the larger display which can be seen even from the last row of seats, but its blips sometimes interrupt the flow of the discussion.

Yet, that’s a part of learning to use this new technology which will enable students to get out of their seats and engage with sociological concepts with their hands.  “I don’t mind putting in the extra work as long as it benefits the students and the college. In fact, I’m really looking forward to learning the technology more and designing interactive assignments for the remainder of the semester,” said Giren-Navarro.

The Value of Technology in Classrooms

This past year, TMCC’s Technology Committee surveyed faculty, asking about technology in the classroom. “We had a bit over 10% of faculty reply to the survey, saying that they’d like to see interactive panels in the classroom,” said Dobbert. “So, we contacted two vendors, and we decided on the ‘ViewSonic’ model.”

Dobbert said there are plans to add another interactive panel to the Learning Commons, but that Giren-Navarro and the diesel program are piloting the technology first.  “Potentially, it could be good for a math class because you can set the background to be like graph paper. Students could do their calculations, which you can later save as a pdf and upload directly to Canvas,” he said.  Dobbert could also see the technology being used in a music classroom, where students could notate their musical score on the screen, save and upload it to Canvas.

Where the interactive panels really seem to shine, however, is in the diesel program. Diesel Instructor Kyle Smith is excited about the new addition to his class. “We got it last Tuesday, we had our training on Thursday and we’re using it in our classes the next day,” he said. Smith uses the interactive panel to review key concepts of the student’s lab activities for the day. Today, they are learning about air intake and emissions, and in particular, the necessary 30-degree fahrenheit difference between ambient air temperature and air in the engine’s intake manifold.

When students start to ask why this temperature difference occurs, Smith turns on a diesel engine next to the interactive panel and switches the display to show the engine diagnostics in action. Students watch as the temperature differential reflects what he predicted in his lecture minutes before.

“I really enjoy it,” said Instructor Assistant Nicole Stewart. “The interactive touch screen lets us pull up graphs that we can draw on. It is also great for showing students how things are physically moving, and the flow within a system.” Stewart mentions that the panel grants a kind of “visual cohesion” to the topics tackled in the diesel program that were difficult to convey without it.

So far, the diesel students seem to appreciate the addition. “It’s great to have a high-end technical side as well as a hands-on aspect to the program. It’s the nicest training facility in town,” said diesel student Garrett Lauf.  Whether TMCC will acquire more interactive panels remains to be seen, although one thing is for sure: instructors are willing to explore possibilities beyond the traditional whiteboard.

For more information about technology at TMCC, contact the Information Technology Office at 775-673-7800.