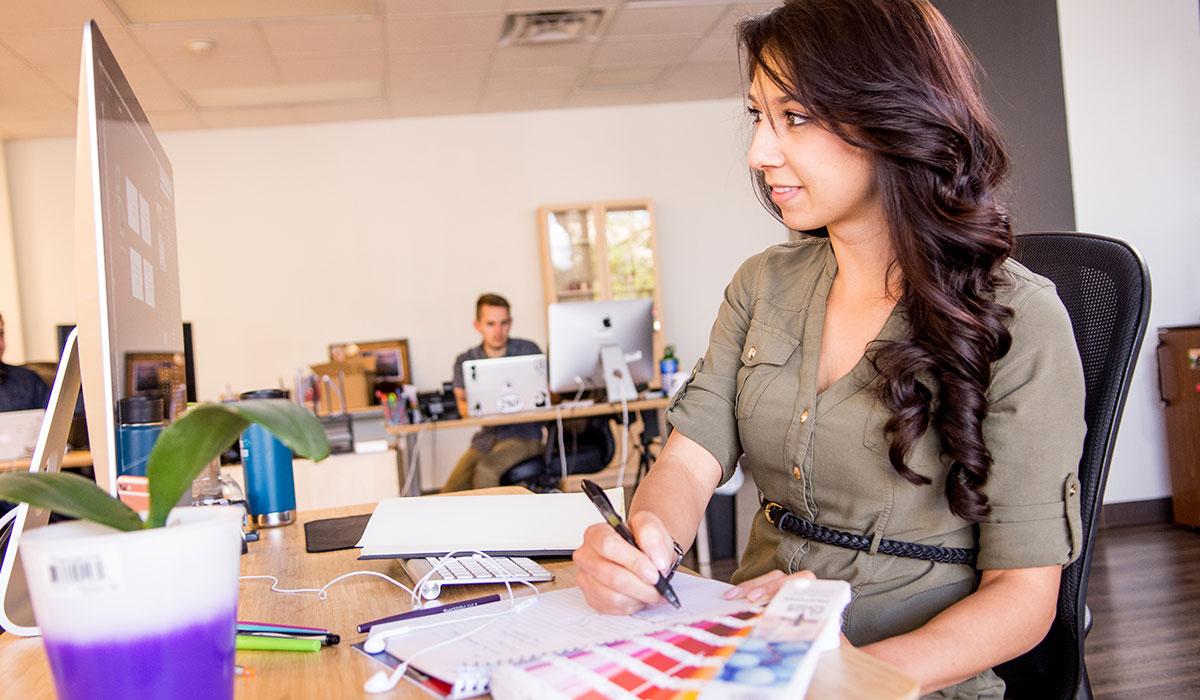 There’s something about listening to music on a record that’s distinctly different than the electronic version played through a Bluetooth speaker, tapes or—does anyone remember these?—a CD. For TMCC Graphic Communications student Evelyn Lopez, an appreciation for the dusty feel of an album is what compelled her to pick Reno’s own Recycled Records for the semester-long project in Graphic Communications 355, a class in advanced graphic design that asked students to create a “visual marketing campaign” for an existing company.

“I wanted to help Recycled Records transition into the modern era and integrate itself into the hipster culture,” said Lopez whose semester-long project involved re-imagining various visual artifacts of the company, including their logo, packaging, website design and the creation of a mobile app that matched the updated “visual brand” she came up with.  Lopez, who’s in her third year in the Graphic Arts & Media Technology program, has always had a love for design and envisions herself, one day, starting her own design company.

Her decision to take an entire semester to re-imagine how Recycled Records is conceived by potential consumers was driven by the challenge as much as it was personal interest. “I have a really cool record collection I inherited,” she said. Her favorite album? “Who Are You?” by The Who, but it’s not for the reason you might think.

“The sleeve on it is ripped,” she said, “but that’s part of what’s cool. There’s this entire story behind the record itself—of course, there’s the story of the musicians who created it, but then there’s the record itself, who owned it before… every record has a story to tell.”

In essence, every visual campaign tells a story—or conveys a specific message and idea about a brand or company. This is the lesson learned by students in GRC 355 taught by Graphic Communications Instructor AnnaSheila Paul.  Each student selected an existing company and worked to integrate the existing company’s message into a re-imagined marketing campaign. As you can imagine, it wasn’t easy.

“The class is called ‘Advanced Graphic Design’ and I know the students certainly felt that it was an advanced class this semester,” said Paul. “There were two requirements for this particular project: the first was that they select an existing company that they like, and the second was that they should be able to visually translate and reinterpret this company differently.”

Rodriguez drew his inspiration from these bold colors and the company’s current palette which blends bright, vibrant colors with a naming convention that borrows terms from geographical locations in Africa. “I took this branding to the next level,” he said. “ I simplified their design while incorporating the texture of their products to create a powerful visual campaign.”

“My goals were to simplify the logo, but to keep the cuteness of the current brand, and to keep the bear,” said Horner. Her re-interpretation was also inspired by the natural swirls and texture of the yogurt.  Wanting to infuse more focus on the honey aspect of the company’s product, she also included a honey drizzle design and honeycomb pattern on the redesigned website and on product containers, as well as a reimagined mobile app where customers could browse yogurt flavors, place orders online and keep track of how many points they’ve earned from past purchases toward a free serving of frozen yogurt.

“The company is very under-rated, and part of why I chose them was to bring them forward with competitors like Yogurt Beach and Sweet Frog,” she said. Horner, who’s been interested in computers and art since she was a child, used this class to help a local business she visits often.

Honey Treat’s owner, Liz Reinick (who attended the final presentation) responded with positive feedback and a single question: “When can we buy it?”

The GRC 355 class is part of the new Graphic Arts & Media Technology’s “3+1” (3 years at TMCC + 1 year at Nevada State College) program, where the students can receive their AA degree (2 years), then their Advanced Certificate (third year), eventually earning their Bachelor of Arts in Visual Media through Nevada State College (fourth year). This is a new program that will ensure the continuity of TMCC students’ education to eventually earn their BA in Visual Media, without having to leave TMCC.

Fourth year NSC classes will be taught by AnnaSheila Paul at TMCC, and some classes will be held online, essentially bringing the NSC curriculum to TMCC’s campus. For more information about the Graphic Arts & Media Technology Program at TMCC, contact the department at 775-673-7291. More information about the 3+1 program can be found on the Nevada State College website.