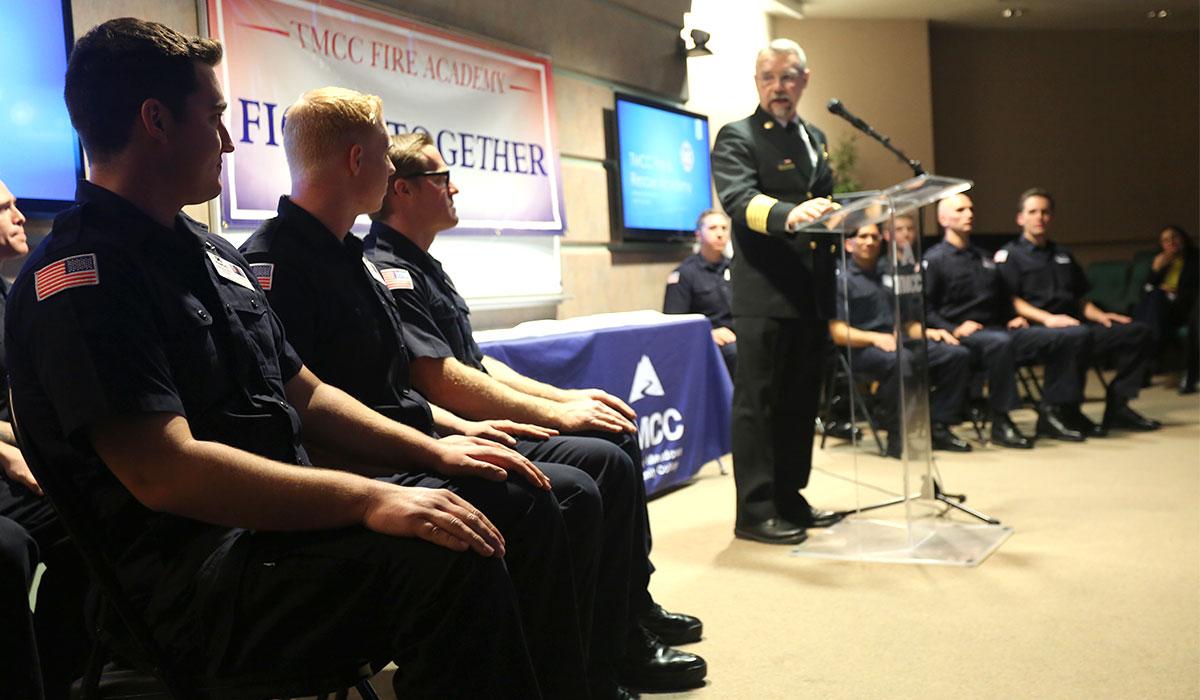 “While we can see the pictures—you can show us what you did, and you can tell us the stories— really, you graduates are the only ones who knows what it took to get here,” said Dean of Sciences Julie Ellsworth in her address to the cadets. A video depicting the challenges faced by cadets in the program, which was created and compiled by Cadet Jack J. Tonner, showed the cadets climbing ladders, learning efficient techniques and tools to dismantle vehicles and, of course, extinguishing various kinds of fires.

While these graduates most certainly performed a wide array of physically and mentally demanding tasks, their training also impressed on them the gravity and the honor of public service in a profession where there is no question of whether or not they will make a difference.

A Lifetime of Service

Chief Darryl Cleveland has served as Program Director to the Emergency Medical Services, Emergency Management and Homeland Security and Fire Technology programs since 2013.  Cleveland has announced that his retirement will occur in 2020, which means this was the final Fire Academy Graduation he will attend as Director. It was fitting that he was chosen to offer the graduates his insights into his longtime profession with stories that underscored the program’s motto: “Fight Together.” His speech both honored the bravery that each cadet has demonstrated by their commitment to the program while recognizing the challenges they will face as professional firefighters.

These challenges can be buffered by family and community—which is why the word “together” is so centrally important to the Fire Academy and the profession for which it prepares its graduates. Firefighters rely on their families for support, certainly, but also draw support from the community of firefighters of which they are a part (their “firefighter families”).

And yet, the profession that offers equal measure of risk and reward is changing. Cell phones—and the insular worlds they offer—have altered the landscape of the firefighter’s world. Firehouses, places where difficult situations could be processed as a team, are no longer quite as open as they once were. And while a part of that is due to physical barriers (very often firehouses now feature individual rooms for each firefighter), yet there are invisible barriers too, due to these new digital and virtual spaces.

In fact, for the first time in history, death by suicide in the fire service is exceeding death in the line of duty. Cleveland counseled graduates that remaining connected to one’s family and one's firefighter family are powerful and necessary methods to combat these alarming trends. “We are our brother’s keeper and our sister’s keeper,” said Cleveland, who called upon graduates to remember their motto fight together. “It’s incumbent upon us as fire service professionals to remain a community [so we can] deal with these complex, difficult, challenging and critical calls as a team... [and to] guard your physical and mental health.”

Cleveland also shared some of the wisdom he accumulated over his near-40 year career. “You’re more than firefighters, you’re also rescue technicians, extrication technicians, EMS professionals. You’re accountable for a great deal of information and skill, all of which require your study and your absolute commitment to competence and proficiency,” he said. “We can’t afford for you not to be that. Because when we call for you, we expect your very best up to and including your final breath, if that’s what it takes.”

And it doesn’t stop there. The career requires a heavy toll  in addition to on-the- job stresses and injuries, but also the possibility of missed anniversary dinners, children's birthday parties, graduations and other milestones. For these reasons, Cleveland emphasized the importance of articulating appreciation and love for one’s family—because a career in the fire service profession is one of service.

“This is a career of selflessness, and a career of giving to others when they can’t take care of themselves... After nearly four decades, it’s still the greatest job on the planet. It’s changing a lot—it’s going to be your job to see the future coming and understand what we do in the fire business... you’ve got to be confident. Everyone around you demands it and expects it.”

Cadet Jessee M. Selby, who would earn the “When the Bell Rings Award” for his ability to dress quickly in “turnouts,” would also present the classes’ plaque. A program tradition, the plaque’s design featured a tattered American flag, a symbol the graduates associated with their journey to the ceremony that began 15 weeks ago.

Graduates would also be recognized for their willingness to push themselves during various training exercises. “Cadet Daniel T. Ortega would literally give it all,” said Commander Nicholas Corona. “He really shone in this capacity. Every day he was here, he put it all out there. Even when he had no more energy to push up, he found a way to push once more.”

Cadets who excelled academically were also recognized. Cadet Joseph J. Cross earned the Salutatorian distinction, while Cadet Kory L. Ricketts was named Valedictorian. “Just as much as this job is physical, there’s an equal focus on the academic side of it as well, because at 2 a.m., we need to know the information we’ve been taught,” said Corona.  The final award of the evening, the “Most Outstanding Cadet” award was presented to Cadet Austin C. Moore.

“This hasn’t been an easy road,” said Squad Class Leader Cadet Jose D. Gonzales-Molina. “But, nothing worth having is easy. There were many days when we were mentally, physically and emotionally drained. We have done this together.”

For more information about TMCC’s Fire Academy, contact the Fire Technology Program at 775-336-4270. 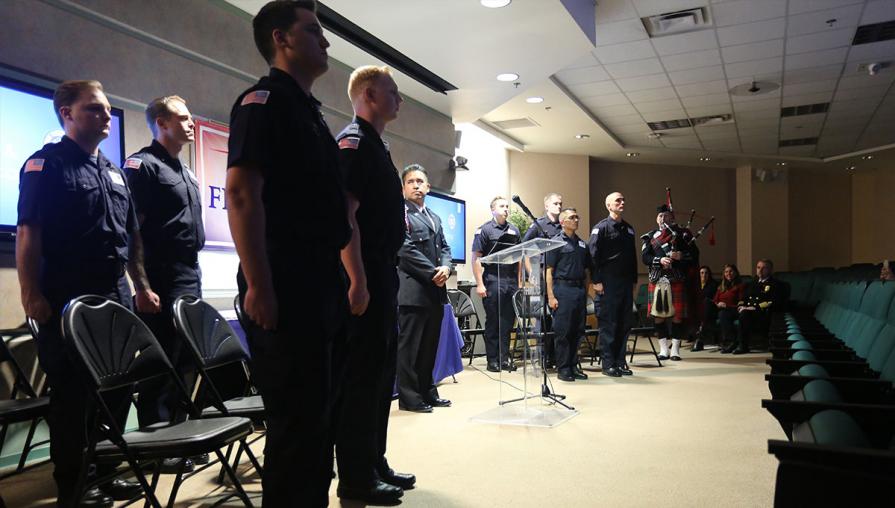 Sean Cummings played the bagpipes as the thirteen graduating cadets entered Sierra 108 at the start of the ceremony. 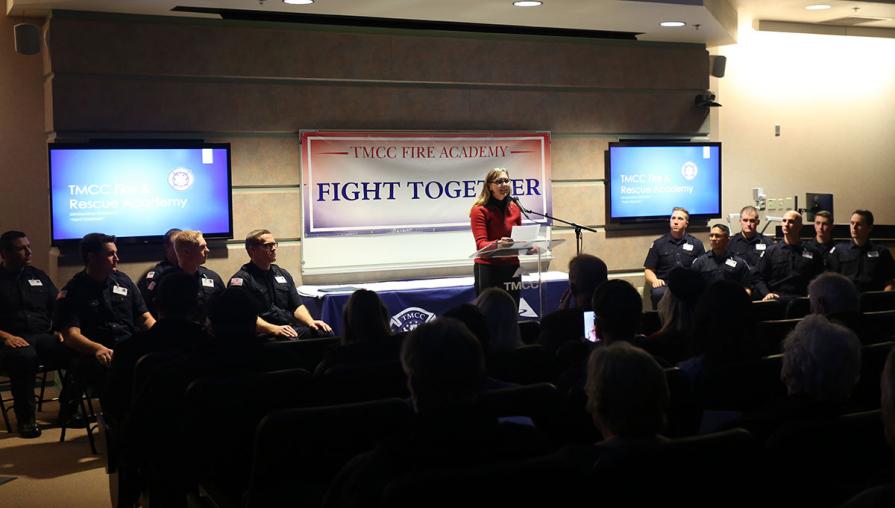 Dean of Sciences Julie Ellsworth addresses the cadets: “...It took grit, it took determination...and it took the support of your family and friends to make it here today.” 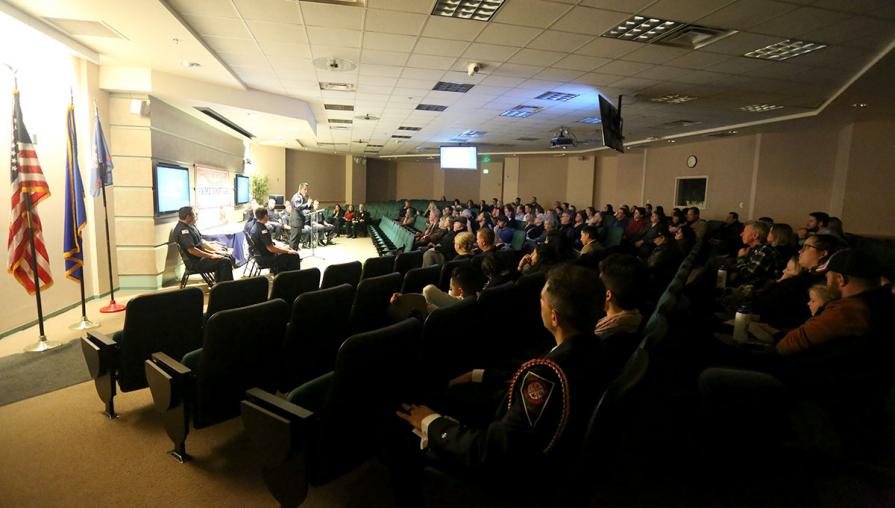 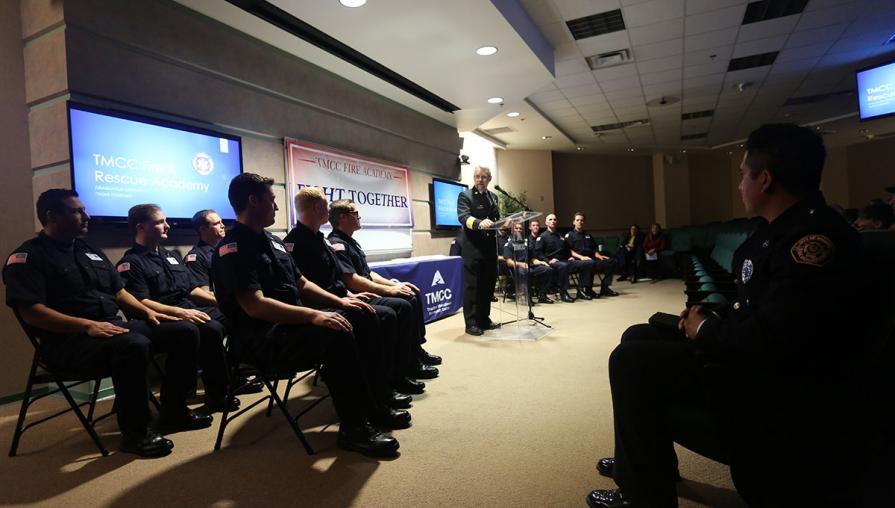 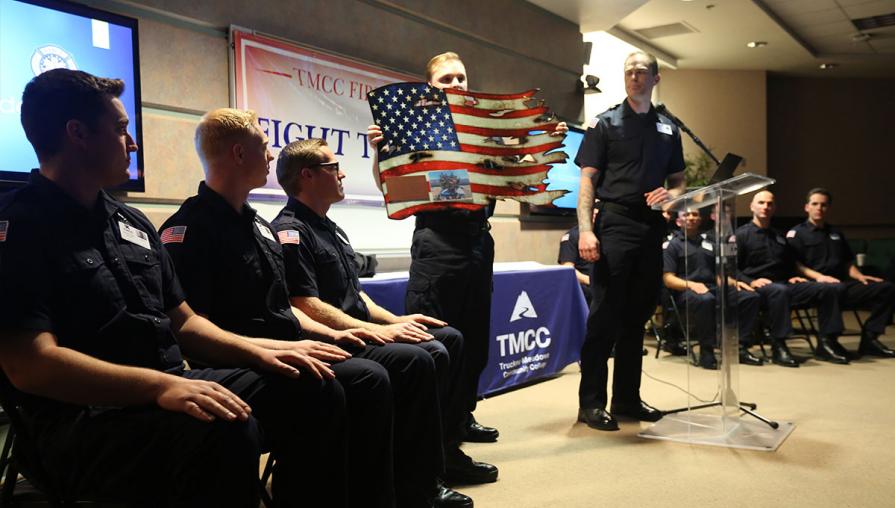 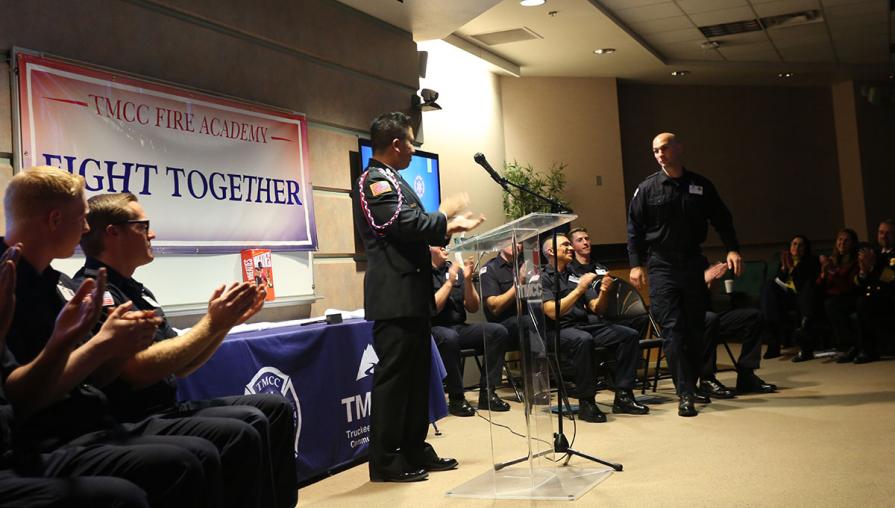 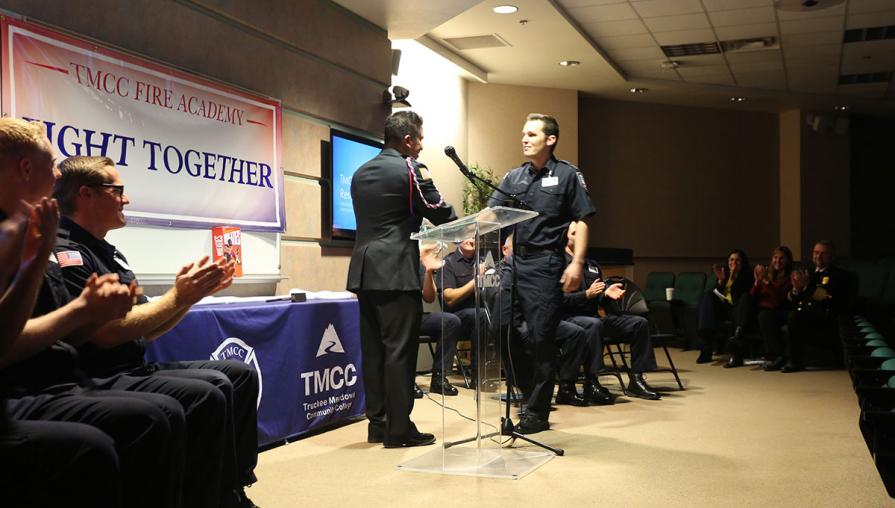 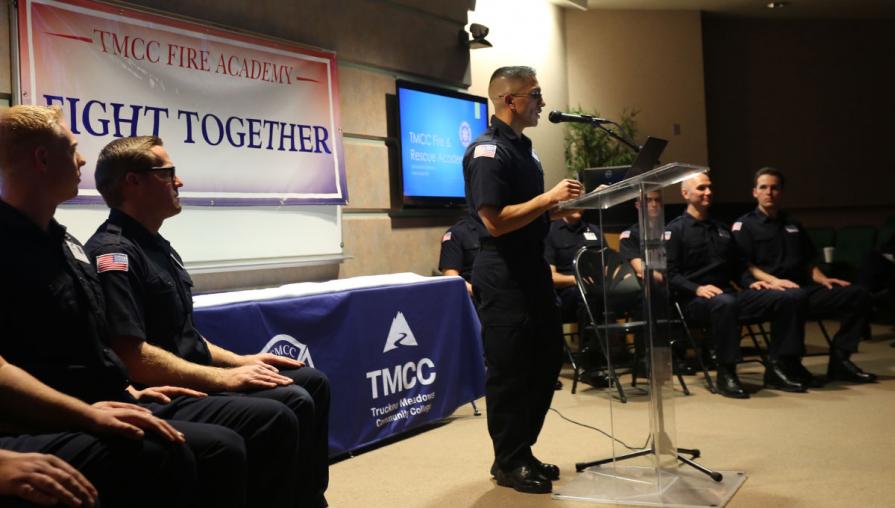 Class Leader Cadet Jose D. Gonzales-Molina reminds Fire Academy Cadets that “what we do in life echoes an eternity.” 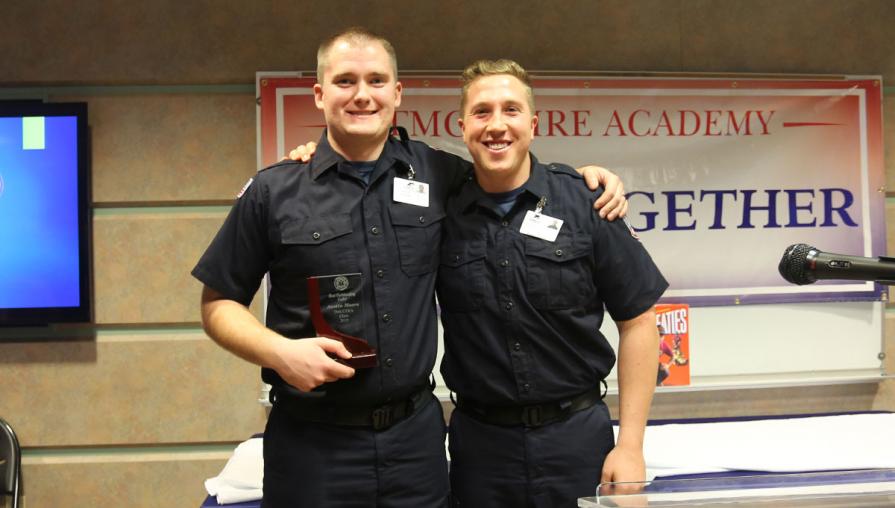 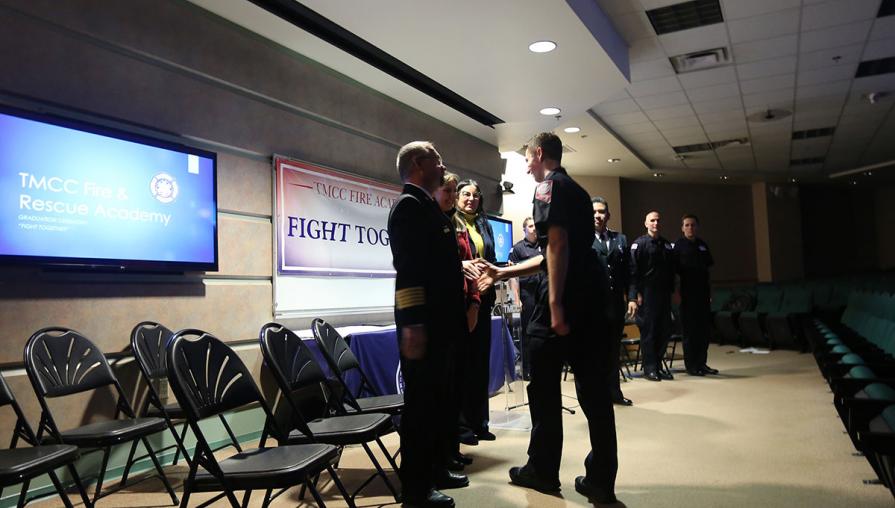 In the final moments of the ceremony, the cadets received their certificates. 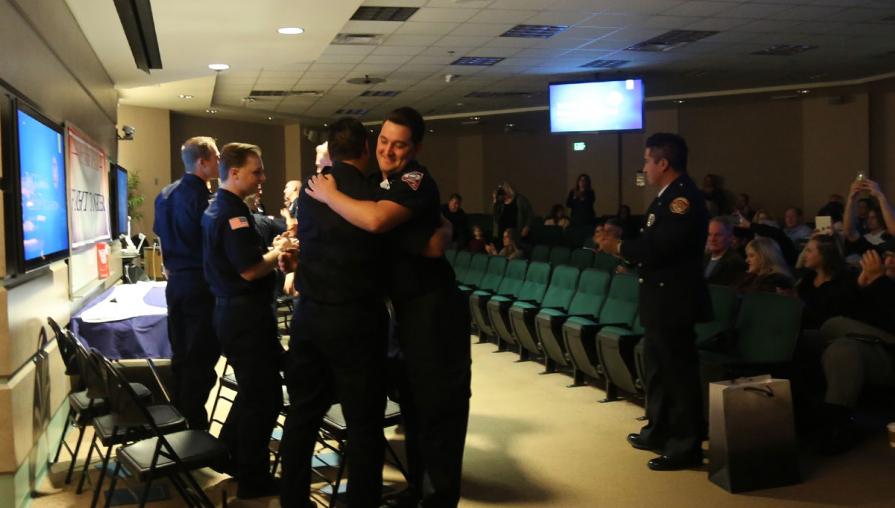 After the ceremony concluded, cadets congratulated each other on their accomplishment.