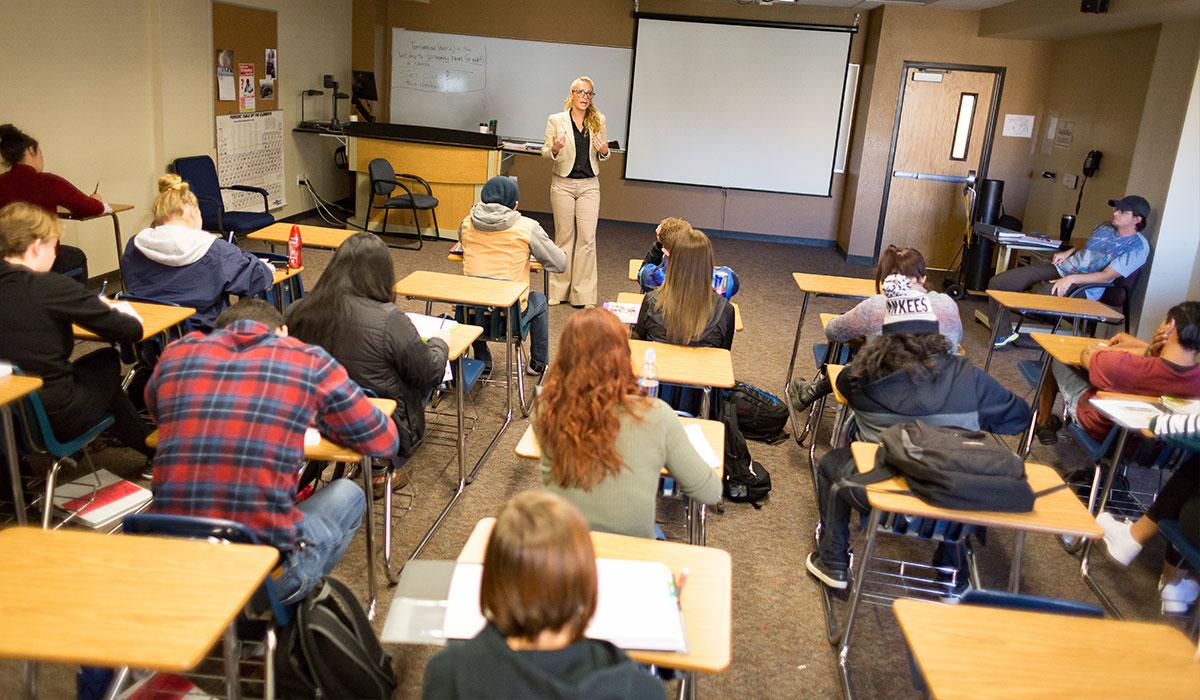 In this series of news stories, we’re celebrating the work of TMCC students who are completing final projects in their classes. Previously, we visited an HVAC class where students built refrigeration units and tested them. Today, we visited a Sociology 101 class that examined—and discussed—research methods, and how even those can, at times, be problematic.

How Do You Know What You Know?

Just because something is labeled as “research” doesn’t mean it should be taken at face value. This semester, students in Marynia Giren-Navarro’s Sociology 101 class worked in groups to create their final projects that explored the various ways that knowledge gleaned from different research methods can be biased, inaccurate or misleading.  The project asked students to review sociological studies, pick one as a group and analyze it in greater detail and then teach their classmates about it. “This enabled them to meet several objectives, including exploring topics that sociologists study, learning about the different methods used for data collection in the social sciences, and understanding the shortcomings of the research design,” said Giren-Navarro.

Two groups in the class would cite the 1971 Stanford Prison Experiment, a social psychology study conducted under the purview of American Psychologist Philip Zimbardo.  The experiment investigated the effects of perceived power by asking experiment participants to participate in a scenario that mirrored the environment of a modern American prison. Zimbardo solicited volunteers by placing an ad in the local paper. Volunteers were assigned roles as either “prisoners” or “guards.” After a few days, the experiment participants embraced their assigned roles and is often cited in introductory psychology textbooks as an example of how regular people adjust their behavior and engage in negative acts due to the status or roles they inhabit in a particular social environment (something called the “Lucifer Effect.”)

Giren-Navarro’s students were not merely explaining the experiment, however, but how this example of an experiment demonstrates the limits of this particular research method. Students cited problems related to consent from experiment participants, validity (experiments that use sound methods to arrive at sound results tend to be considered valid) and reliability (that an experiment can be repeated and wasn’t simply a “fluke”.)

“If participants can guess the hypothesis of the study, that can invalidate the study,” said student Ian O’Keefe whose group would conclude that due to a lack of validity and a random sample of participants, the experiment was problematic.

Another group would examine the merits and shortcomings of a research method called “Secondary Analysis”—analyzing documentation created by other (past) research to arrive at a new conclusion.  This group reviewed a study that examined the effect of standardized testing on elementary school-age children in Ireland (where standardized testing was not used as a measure of academic progress.) Students in this group would cite the “Hawthorne Effect” as problematic—that someone alters their behavior because they know they are being observed. The students concluded that the validity of this study was questionable due to the altered behaviors of teachers who were aware of the presence of the researchers.

Additionally, working together enabled the students to experience the impact of working collaboratively—a topic the class had discussed earlier in the semester. “We discussed how social media is changing our interactions,” said Giren-Navarro. “The students participated in an online discussion where they contrasted their opinions and beliefs on this topic with the results of scientific studies. Most people have negative feelings about the depersonalization of our contact [with others] because of social media. One of this project’s objectives was simply to bring them together through having them work on a project on the assigned research methodology.”

In addition to merely presenting a study, the project asked students to track each other’s progress in order to fulfill the project requirements—perhaps bridging the perceived social disconnect by sharing their insights on sociological studies and problems in research—learning to think critically about their own thoughts and ideas.

For more information about TMCC’s Sociology Program, contact the Social Sciences Department at 775-673-7185.