How to See Art at TMCC this Fall 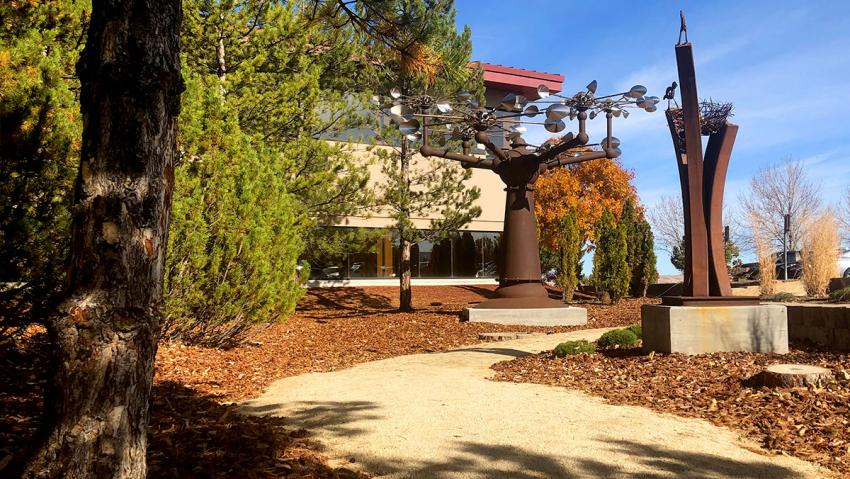 They say the character of a college campus can be seen in how it displays its art, whether that be photography or paintings hung in hallways or in installations that form more permanent spaces in and around buildings. Art can speak to a college’s values while celebrating the creative expression of students, faculty, and artists from our community and beyond.

This fall offers you plenty of opportunities to see art at TMCC (and even some TMCC art in the community) through new additions to TMCC’s Permanent Art Collection, upcoming shows in TMCC’s galleries, as well as artwork that was creatively curated thanks to a seasonal art challenge called “Inktober” that was organized by TMCC’s Art Club.

Dave Boyer, sculpture artist whose piece Macchina Naturale was installed this past August, learned elements of his wind sculptures by taking various classes from TMCC—including Welding, CAD and Machining— starting in 2003. Over the years, his wind sculpture pieces have evolved, becoming more intricate and large.

According to Boyer, Macchina Naturale was originally conceived years ago as a simpler design that only included rotors on posts. That version of the sculpture was installed at the 2015 Burning Man. Since, the piece evolved to include a single mount and trunk, similar to a tree. In 2017, the updated sculpture returned to Burning Man where it became the official site of at least three weddings.  Today, Boyer’s sculpture calls TMCC’s Dandini Campus home. Its monumental size, whimsical style, and antique appearance are hard to miss, and students and staff alike will find its interaction with the wind mesmerizing.

Boyer’s piece is one of three sculptures that form TMCC’s Sculpture Garden. The piece, which is connected by a meandering path to Nesting by Jeff Schombert and Bow Series 1 2 3 by Grant Miller, offer TMCC students, faculty and staff a place to wander, to contemplate and to appreciate the way art and the natural world can communicate. 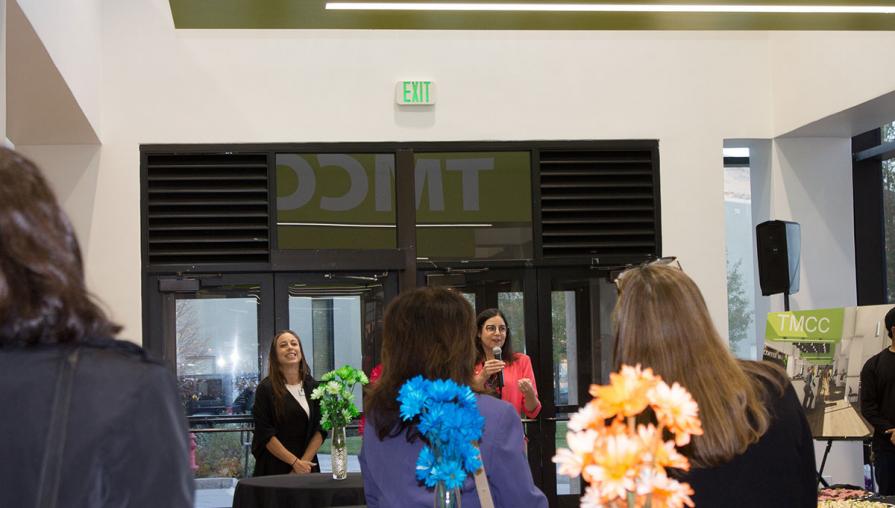 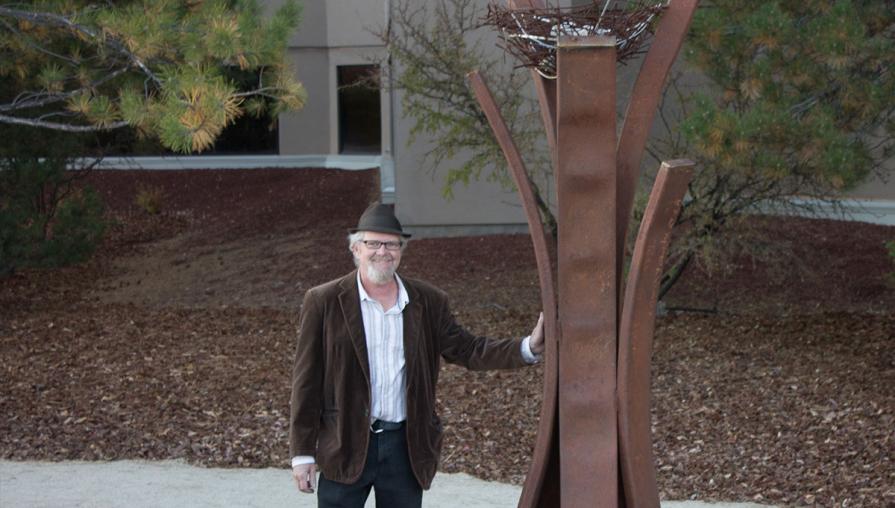 Artist Jeff Schomberg with his sculpture, Nesting, that is one of three sculptures in TMCC’s new Sculpture Garden. 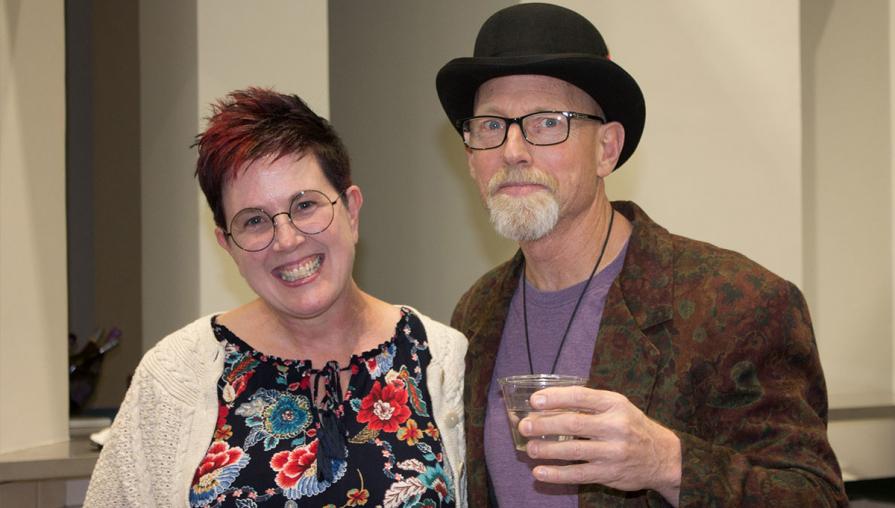 Starting in October, the TMCC Art Club wanted to engage the campus community in the creation and consumption of art. The club selected the Instagram challenge “Inktober,” the creation of Illustrator and Cartoonist Jake Parker who challenged himself to create a new ink drawing every day of October as a way to improve his drawing and inking skills. Since, Inktober has become an official online challenge on Instagram followed by millions. Each day in October, Parker releases a prompt list, with a word associated with each day of the month to act as both inspiration and a guide for participants. Prompts include: swift, divided, poison, underwater and fierce, to name a few examples. 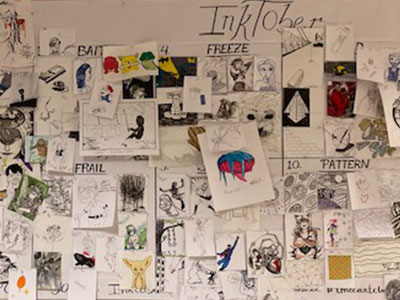 TMCC Art Club student members suggested having Inktober at TMCC. Club Advisor and TMCC Art Instructor Rossitza Todorova liked the idea of hosting a version of Inktober, but wondered how this digital and social challenge could take place in physical campus spaces. With Todorova’s help TMCC Art Club ended up using spaces where TMCC students were accustomed to seeing art: the art boards on the second floor in the Red Mountain Building. “We divided these boards into the daily prompts. The Art Club provided thumbtacks, ink, and paper to anyone who wanted to put up their drawing.”

The participation on campus has been remarkable. “Some people picked a favorite prompt, while others have been doing a drawing every day,” said Todorova, who along with the Art Club, has been doling out daily awards and weekly awards, which includes a goodie bag from Nevada Fine Arts. “This kind of challenge incentivizes people to make art and to participate,” said Todorova. “People look for new art on the boards every day, and this is creating a space where students can participate.”

For more information about the TMCC Art Club, contact the TMCC Visual and Performing Arts Department at 775-673-7291. 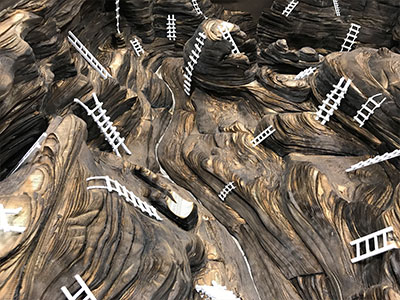 Beginning Wednesday, Nov. 6, Miya Hannan’s installation Layered Upon Layers will be on display in the TMCC Main Gallery. The exhibit demonstrates Hannan’s view that the world is constructed of layers and linkages of human lives and histories. An artist’s reception will be held on Nov. 6 at 5-7 p.m. in the Student Center where Hannan will discuss the inspiration and process for her work.

Hannan’s practice is influenced by Asian death philosophy and rituals, as well as by her scientific education. Over time, she developed her own philosophical views about death in order to deal with this difficult topic. Through her work, Hannan presents the structure of the world as a conjoined totality, evoking a spiritual quality beyond the material from which its made.

“I was a scientist in a country with many superstitions, which gave me the ability to perceive the world from two contrasting perspectives. In my artwork, I am interested in creating the unity of opposites that constitutes our world. Scientific and nonscientific, silent and communicative, still and active—these are the dichotomies that inform my work,” Hannan states in her Artist Statement.

Hannan received her bachelor’s degree in medical technology from the school of health sciences, Kyushu University and received her M.F.A. from San Francisco Art Institute in 2007. She is currently an assistant professor at the University of Nevada, Reno. Her recent solo exhibitions include the Morris Graves Museum of Art, Eureka, CA and Oats Park Art Center, Fallon, NV. Artists Statement #1 by CICA Museum in Korea and ArtMagazine in New York and the United Kingdom have featured her work in publications.

Hannan’s exhibition is a part of the 2019 TMCC Fall Art Exhibits, which also includes work in the other campus galleries. In the Red Mountain Gallery, lifelong artist Ben Aleck presents “Retrospective”. The exhibit displays the work from his extensive art career, which has been influenced by the landscape of Northern Nevada and inspired by his culture. A native of the Pyramid Lake Paiute Tribe, Aleck received his Bachelor of Fine Arts in Painting from the California College of Arts and Crafts in Oakland, CA.

In memory of Erik M. Lauritzen, the Erik Lauritzen Gallery will exhibit “Portfolio 1”, 14 photographs that have been generously donated in memory of Lauritzen who passed in 2007. Lauritzen, who established the TMCC Photography department and taught from 1991-2004, advised on the construction of the current photography lab and managed TMCC’s Art Galleries 1991–1998. A workshop assistant for Ansel Adams, Al Weber, Morley Baer, Oliver Gagliani and Pirkle Jones, Erik worked and learned from these renowned artists and went on to have a successful 34-year career. His photographs are in collections throughout the U.S. including, Carnegie Museum of Art in Pittsburgh, Kresge Art Museum in Lansing, MI and the Museum of Contemporary Art in Los Angeles.

TMCC’s Red Mountain Student Gallery will feature Art 231, Painting I students’ artwork in an exhibit called “Oasis in the Desert.” Each still-life in the exhibition offers a reflection on what helps students to unwind and rejuvenate during the stressful parts of the semester.  The exhibit was organized by Studio Art Instructor, Rossitza Todorova.