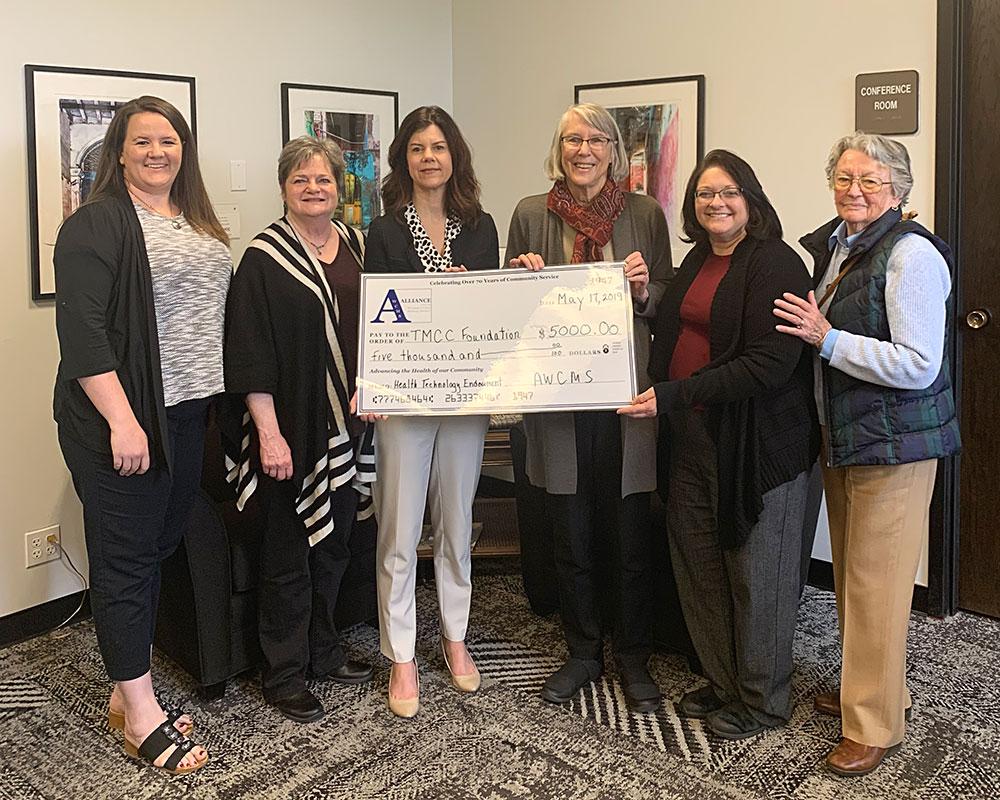 On Friday, May 17, the TMCC Foundation was presented with a $5,000 check from the Alliance with the Washoe County Medical Society (AWCMS).  Longtime AWCMS members attending the check presentation were Joyce Sundstrom, Ginny Williams, and Jean Myles.  A special thank you was extended to the AWCMS by TMCC Foundation Executive Director, Gretchen Sawyer and Foundation staff.  This contribution will be applied to the AWCMS Health Sciences Technology Scholarship Endowment to increase the value of the endowment principal enabling the award of the scholarship on an annual basis.  This endowment was established to benefit students in the following health sciences programs:  certified nursing assistant (CNA), radiological technology, clinical laboratory, and dietetics. Jean Myles added, “As a non-profit organization, we are delighted to support TMCC and help students obtain their education and training needed for careers in these important areas.  Well trained office assistants are needed with the shortage of physicians and nurses in Nevada.”

The AWCMS was founded in 1947 by physician’s wives who were nurses returning from service in WWII.  They began their charitable activities by providing scholarships for nursing students who had to go out of state for training.  AWCMS members lobbied for a nursing school in Nevada and in 1955 the Orvis School of Nursing at the University of Nevada opened.  TMCC began offering nursing as a stand-alone program in 1979.  AWCMS established endowed Nursing scholarship funds at Orvis and at TMCC in 1990.  As the non-profit organization grew, members held the “Doctor’s Wives Rummage Sale” in 1951 to continue raising funds to sustain their efforts leading to the establishment of the Community Action Fund Committee in 1970.  AWCMS members continue to conduct fundraisers throughout the year to raise the dollars needed to sustain and grow the organization’s charitable giving.

From the organization’s inception in 1947 to today, the AWCMS has awarded over $300,000 in nursing/health sciences scholarships and over $2 million to community organizations located in Washoe County.  The AWCMS intends to continue to focus on supporting agencies whose work is critical to the health and well-being of the Washoe County community.  For more information about establishing a scholarship at TMCC, contact Becky Josten, Scholarship Manager at 775-673-7127.