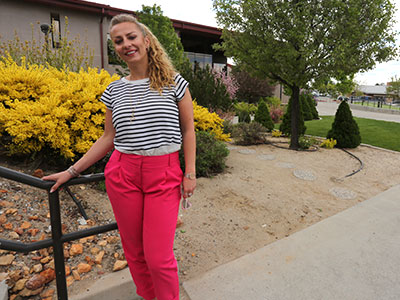 Sociology Professor Marynia Giren-Navarro endeavors to create safe spaces where students can explore their connection to community and themselves.

On a sunny Sunday in May, students in Marynia Giren-Navarro’s sociology classes experienced a day of “verstehen”, a German word, which literally means “understanding” but is also a term coined by sociologist Max Weber that approximates the meaning of our English idiom of walking a mile in someone else’s shoes. Only Navarro’s students did this by removing their shoes and donning a scarf to cover their head at the Sikh Temple on Selmi Drive in Reno.

The Sikh religion—followed by 25 million worldwide—is often the target of much discrimination in the United States, mostly fueled by misunderstandings about the tenets and practices of Sikhism (this became especially true after 9/11.) Yet, Sikhism is not a form of Islam or Hinduism: rather it is based on ideas of service and equality among all people, regardless of whether they are a part of the diaspora or not.

Navarro’s students visited the temple as a part of a larger assignment that asked them to reflect on the semester, which included considering their own connection to the community. To achieve these goals, Navarro’s students asked questions of their Sikh hosts and later, visited the temple where devotional and communal singing called Kirtan, is practiced. Listening to the Kirtan, which contains spiritual narratives, invites a kind of personal and communal meditation in a setting that Sikh’s call Sangat—a gathering of fellow, like-minded travelers on a spiritual journey. It was an appropriate setting for students to reflect on their part in our community—a central question in the study of sociology.

Are you going to eat that cake?

Navarro brings a unique perspective to sociology not only due to her professional accolades—which include a 2019 NISOD Excellence Award and a recent Professional of the Month Award—but also because Navarro was born and raised in Poland, which was a communist country until 1989, and that differs greatly from her home in Reno. Concepts like formality, hospitality, and even germs are subject to language and culture—they are, in other words, relative and varied depending upon the people who have adopted them. Through sociology, Navarro aims to show us that, through our various differences, there are many ways in which we are all the same.

One of Navarro’s illustrations of this idea happens when her Polish mother visits her in the United States. “I make sure to take her to a party where one of the appetizers offered is chips and dip because when she 'double dips' it illustrates the social construction of reality,” said Navarro. “It just fascinates me, the things that we take for granted—that we consider ‘natural’ or ‘biological’ because they are based on what somebody in a position of authority told us,” she said. “Because ‘this is how we have always done it’, or ‘because everyone does it’ or ‘because I have seen it and this is how it must be.’”

And yet, our perception of reality is based heavily upon culture and particularly language. “I perceive things differently simply because my native tongue is Polish, so because of the different languages we speak, we see things differently and our perception of reality is not the same,” she said. This is the Sapir-Whorf thesis, which states you see things because you have a word to describe it. “In Polish, we don’t have a term for ‘double-dipping.’ So, it doesn’t exist as an issue in my culture. Not to say that we don’t believe in germs. We absolutely do. We just don’t see them in that particular situation.”

So while Americans might react negatively to Navarro’s mother “double-dipping” at the chip and dip bowl, we don’t have a similar reaction to other situations that are equally germ-ridden. “English doesn’t have a word for what happens when a three-year-old blows his or her germs all over a birthday cake, so it’s not perceived as a problem-- or it's not seen at all,” she said.

In other words, germs are universally perceived as a problem, but where and how they manifest—is based on culture and language.

Curiosity About the Human Condition

In her own words, Marynia Giren-Navarro grew up “in school.” Like the children of actors who grow up “on stage”, Navarro became familiar with classrooms and teachers’ lounges because her parents were both professors. Yet, that wasn’t the life they envisioned for their daughter. But then, a future in the Western United States—specifically, Reno—probably isn’t what came to mind for two Polish academics, either.

“I was supposed to be a lawyer,” said Navarro. “I was studying to be accepted to law school and I remember throwing the book across my room in the middle of the night and I told my parents ‘I can’t do it, it’s not me.’” From that moment, Navarro devoted herself to studying sociology.

It is the curiosity—the critical insight into what we often take as natural or given—that Navarro hopes to impart to her students. “I want them to come to class, and then go home and notice what we talked about,” she said. “I love those moments when students recognize how these concepts are visible in their daily lives.”

One topic Navarro teaches is conformity. “People don’t even realize how many silly things we do to fit in, and to not be the odd person in the group.” After discussing this in class, she said that students start to notice how they almost subconsciously watch what the other people in the group are doing and that influences how they respond to the situation.

Teaching these topics requires that Navarro is “verstehen.” “I have to put myself in somebody else’s shoes as much as possible to understand how they perceive what’s going on around them and how I can help,” she said.

In addition to sociology classes, Navarro also teaches a class on Human Sexuality (Psychology 130). "One of my goals for the class is to address the elephant in the room: sexual wellbeing," she said. "We are all sexual beings, but the question is: are we sexual well-beings?" The class explores how sexuality influences relationships, marriage, and families—relevant topics in a time when the divorce rate in the United States rests at about 50%.

Yet, Navarro creates a safe space where conversations about sexuality—something students may not have considered discussing in a classroom setting—can happen. “This course allows them to put their own experiences and thoughts into a larger perspective that enables them to see the connection between clear and open communication between partners and some of the larger issues society is facing like high teenage pregnancy rates and the increasing number of STIs,” said Navarro. Her goal in this class is to normalize discourses around sexuality and the body.

However, it’s nothing new that people become squeamish around the topic of sex. Navarro cites a common food, the chicken drumstick, and asks: “Do you know why the ‘drumstick’ is called the ‘drumstick’? In the Victorian era, the word ‘leg’ had a sexual charge to it, and it was considered indecent to ask for that at the dinner table.” Speaking without unnecessary metaphor can enable students to realize how their beliefs and actions contribute to issues that societies face. Not talking about sexuality, for instance, perpetuates disconnection through silence.

Putting Yourself In Other People’s Shoes

To study Sociology is to become its practitioner: to become if not like-minded than, at least, open-minded with the awareness of constructs for which we might not have a name. Navarro began teaching at TMCC as part-time faculty and, in her own words “...very involved in everything and anything I could get myself into.” Her involvement in the college paid off: three years ago, Navarro gained a tenure track position.

“I think it’s the immigrant mindset,” she said. “I promised my family that I would do everything in my power to continue on the career path I chose for myself.” That drive also led Navarro to advocate for other part-time faculty who bring innovation, practical application and passion to the classrooms at TMCC.

“It’s a very important role I play at the college—I remember the struggles and challenges of being part-time faculty—it’s very rewarding, but it isn’t easy.” When Navarro was named Chair of the Part-Time Faculty Committee she advocated for their representation on the Faculty Senate. “It was shocking to me when I discovered that 70% of our faculty are part-time and yet we didn’t have a vote. For my first two years as chair, it was my personal goal to get us a senator. And, once we got a senator, I asked for another one. Now, we have two senators and I’m extremely proud of the work of our committee. It’s our mission to make sure that part-time faculty get the best treatment they can, and that they can take advantage of the opportunities that the college can offer them.”

Navarro extends her compassion for others and her curiosity about the human condition in and beyond the classroom—her classes work to bridge connections between lived experience and abstract concepts, thinking through problems that you didn’t know were problems before. This is often done through food. “Sharing food is the basic way of making and extending bonds.” Her classes host potlucks and include field trips—like the trip to Reno’s Sikh Temple—a field trip that Navarro’s classes have completed for two years.

“When you visit a Sikh Temple, there is always food involved,” said Navarro. “The experience allows us to synthesize many sociological concepts pertaining to gender roles and what it means to be a religious or ethnic minority that is also a case of mistaken identity. Sikhs are mistaken for Muslims, which results in prejudice and discrimination against them. It also lets us have fun together, and to have some great food.”

Yet, the work of sociology—the work that Navarro evokes through her classes—seeks to excavate the origin of our preconceived notions of why the world is the way it is. If language precedes the thought, sociology is the primer through which ideas, fears, and prejudice can be framed, conceptualized and understood. And because breaking bread facilitates these connections—and discussions—about the experiences we encounter on this life-long journey, there is always a great deal of food for thought, too.