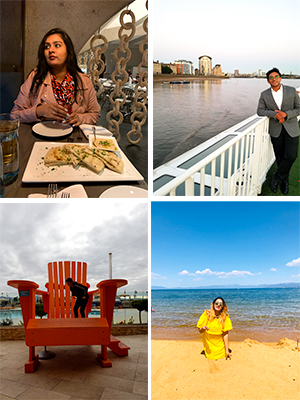 TMCC International Students Aanchal, Ravi and Jefferson blog about their experiences in the United States.

Piradeep Raveediran—who goes by Ravi—was 24 years old when he arrived at TMCC direct from Paris, France. His experience as an International Student is unique not only due to his heritage (which is a blend of Sri Lankan and French culture) which collided with the version of the American West offered in Reno—but also because this experience is documented on the StudyUSA blog where Ravi was a student blogger. In his first blog, published in April 2018, he wrote:

Growing up in France with Sri Lankan parents I had to cross cultural boundaries every day and my travels abroad and my experience studying in the U.S. have helped me reflect on my own cultural values and dissect who I really am.

When International Student Advisor Virag Nikolics suggested he start blogging about his experience, she was initially met with resistance. In a meeting with Nikolics, he revealed that he wasn’t sure he was capable of writing his experiences down. “But, he is a natural storyteller. He started to use his blog as a journaling tool, and it’s wonderful to see where he took it. By the end of his first semester, he had a following,” she said.

TMCC International Students started blogging last year when International Student Advisor Virag Nikolics thought it would be valuable for her international peer mentors to share their experiences with others. “I noticed this blog, StudyUSA, where a lot of the blogs were used as marketing tools for other universities. I wanted these blogs to enable our students to share their experiences of studying abroad in the U.S. with others.”

Still, it wasn’t an easy project. Ravi, who would end up blogging about everything from cultural identity, idiom, cuisine and weight loss, was daunted by a project that would test his English skills. “I was really worried. Even though I had a message to convey... we went through five rough drafts before having a final one.” And yet, his blogs tell the story of a student learning how to be independent and how to live in a country that is very unlike his own.

When Jefferson Phillips started blogging, he thought that he would only write about his academic experiences. “I really focused on how to be an international student,” he said. “How to adapt to a new culture, how to live on your own and how to succeed in college.” Phillips, who is an International Student from Costa Rica, had read plenty of blogs before. “There are blogs about anything,” he said, and with so many possibilities, an academic how-to seemed like the most practical approach.

Then Nikolics suggested he try to write about some of his personal experiences as well. That advice clicked for Phillips, who was struggling with something not-school related. “I don’t know how to cook, and it was killing me,” he said. So, he mentioned it in his blog—and this was the entry point into a more personal form of storytelling.

His favorite blog, “Snowboarding: How Dangerous Can it Be?” is also his most revealing; it details his first experience snowboarding with other international students.

I used to surf back at home...hence, I thought that this was going to be easy for me to learn how to snowboard, but it was more difficult than I thought. The process of learning was fun. I fell a million times throughout the day, but I could notice a nice improvement after each try. By night, I was able to manage what they call a “medium level” hill without falling.

Then, the unexpected happened: a friend asked him to race down the final run of the day, and Jefferson caught an edge and fell on his shoulder, breaking his collarbone. “The first thing I thought was how expensive it was going to be,” he said. Writing about the experience—when he was no longer injured—helped him to process what happened. It also made an impact on his readers, who later reached out to Jefferson as a result of what he’d written.

The most challenging part of blogging? “It’s the language,” he said. “English is a struggle—I learned English informally, and so the hard part isn’t coming up with ideas, it is making sure it is expressed using the correct grammar and syntax.” Blogging, though, has helped—and sharing his experiences with others has been unbelievably rewarding.

Aanchal Tangri, who is pursuing a degree in English from TMCC, is an International Student from Northern India. She’s no stranger to writing—she has already earned a Bachelor’s degree in journalism from a university in India— but an internship in 2014 at Walt Disney World in Orlando, Florida changed her perspectives on life and writing, “I want to be a Content Strategist there,” she said. “It really was the ‘Best Place on Earth.’”

Tangri is pursuing her Associate degree in English from TMCC, and credits much of her recent growth as a writer to her English 205 (Creative Writing) class, taught by Lindsay Wilson. “I love writing using concrete detail,” she said—which makes sense, given that Tangri’s work is driven by a passion to convey what she loves about travel: the people, the places and the sense of place. Recently, she took a trip to Portland, Oregon and has already begun outlining the blog that will be published this semester: “It will be about the water, beauty, and greenery—something you notice when you are from a dry place like Nevada.” She described going to a donut shop by the Willamette River and visiting the “2-blocks big” Powells bookstore as memorable experiences worth sharing with others.

Traveling itself gives Tangri space and time to write. Whether it’s a plane or bus, Tangri writes when she’s in-between places. “Driving into the Sierra Nevada and over Donner Pass with the beautiful trees and lakes, that is what writing feels like to me,” she said.

Even as a seasoned traveler, though, Tangri still misses home, and this longing has manifested in one of the most concrete details of home: food. In her blog “Tantalizing Foods”, she writes:

For me, it’s not just the food but the memories attached to it that makes it even more special. The occasion when mom cooked this particular dessert or when she prepped a wholesome flavorful meal for the entire family takes me back to those family gatherings... Now continents away, I miss it so badly and I long to go back in time and relive all those fantastic days. [...] I start with the pan in one hand and my phone in the other. I call mom and ask for the easy and quick Indian recipes and from the other end of the receiver outpours a big list of palatable foods.

For Tangri, home can be accessed from any part of the world through what is tangible; food is a marker of culture and memory that she evokes for herself and her readers as if to say: home can be everywhere if you are willing to do the work to create it.

For Ravi, Phillips, and Tangri, blogging about their experiences has opened possibilities through an increased sense of confidence in expressing their ideas and sharing their thoughts, experiences, and lives with others.

It has also been an unexpected source of inspiration. For Tangri, she is learning to hone her skills in order to reach a professional goal; for Phillips, he is mastering a foreign language. And Ravi, who will be graduating with his Bachelor’s in Business Administration from UNR this summer, he has used his blogging as a way to capture his evolution as a person—to reflect back on who he was one year ago.

“When I was a kid, I always dreamed big and I still do,” he wrote in his first blog. When asked about that statement one year later, Ravi thinks for a moment before he says: “Everyone still tells me I dream big, and I am still working on a lot of those dreams. But, when I was nine or ten years old, I told my friends as a joke that I was going to go to the U.S. to study. I never really thought I would realize it. My brother even told me not to say that. So, in that way, I achieved something I said I would do. I am here.”

It starts with sitting your intention—your words—on the page. Or, in this day and age, perhaps it starts with a blog.

For more information about the International Student Services, contact the department at 775-337-5605.