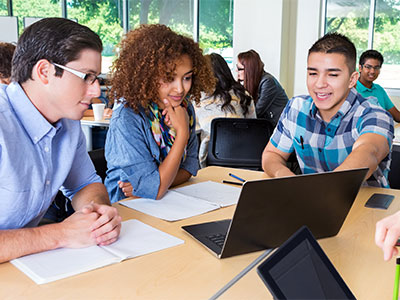 A new Associate Degree in Communications will be added to TMCC's Course Catalog this April.

The Associate of Arts in Communication will make its official debut in the TMCC Course Catalog in April 2019.

Taylor Crockett, a first-year TMCC student, became interested in communications because it doesn’t just describe what we do, but instead focuses on the “why.” Crockett, who’s taken Communication 101 (Public Speaking), Communication 133 (Fundamentals of Speech Communication) and is now enrolled in an Independent Study says that “...it fascinates me, and helps me understand how my relationships work, and gives me a sense of why I do what I do.”

She describes a cost-benefit analysis each of us engages in—a sort of perceived give-and-take—that forms the precarious balance between feeling overwhelmed, drained or fulfilled by another person’s presence in our lives. “These theories explain why we do what we do. And when you really stop to think about it, it makes sense,” she said.

The Market Value of a Degree in Communications

While Communication classes are nothing new to TMCC’s campus, the ability for a student to receive an Associate of Arts degree that is transferable to UNR and other NSHE institutions in them is. The impetus behind the new degree is based in market research of what employers are looking for out of recent college graduates. According to the 2018 Princeton Review, Communication is ranked second in a list of the 10 most popular degrees in the country. This listed was compiled based on research covering job prospects, alumni salaries, and popularity.

Also, according to the National Communication Association, individuals “who hold a bachelor’s degree in Communications earn an average of $2.4 million over their careers, making Communication a profitable liberal arts degree.” The flexibility end employer appeal of this degree makes students of this discipline more likely to get hired than seekers of other degrees.

But you may still be wondering: what exactly do Communication majors do?

If You Guessed They Communicate, You’re Mostly Right

The classes that compose the Communications degree focus on speech, writing, the impact of media on individuals and society, inter and intrapersonal relationships, to name a few examples. Dr. Eric Bullis, who is in charge of the Communications program, remarks that students are typically strong in some forms of communication, and need development in others.

This is why Bullis teaches “nonverbal communication,” a skill set that draws heavily on the saying “it’s not what you say, but how you say it.” Students learn the meaning behind making eye contact, nodding, adding tone and inflection to their voices.

Students also engage in theories and research around communication, such as the “Mean World Syndrome” a theory drawn from Media Studies that describes the effect of violence-filled media on consumers. “We start to see the world as a dangerous and violent place,” Bullis said, “even though it really isn’t that way at all.” Research has confirmed a direct correlation exists between the amount of media one consumes and the amount of fear one harbors about the world.

Likewise, the power of language—when paired with images, music and other media to deliver a crafted message—is the focus of study as well. Students examine examples of advertising that “craft the message” well, and examine why others miss the mark.

For Crockett, it’s ideas like these that make the degree her new passion. “I’ve never been like this in school. In high school, I was always a good student, and I always did well. Now, though, I’m excited about what I’m learning. Studying communication gives you a leg up on how to interact with people face-to-face, in business or everyday situations.” While she’s still exploring different career options, Crockett finds value in the ideas and insights she encounters in Communication classes.

“Students drawn to this degree are hungry for authenticity in their lives,” said Bullis. “They have a desire to reach out and connect with people around them.” And if you believe the research, this desire for connection can also lead to successful outcomes, both personally and professionally.