Films That Bring the World to TMCC 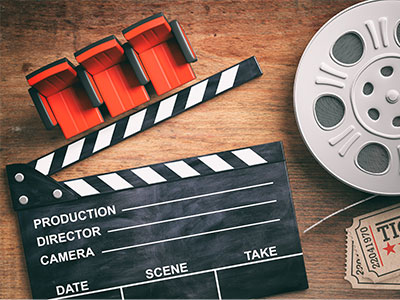 The French Film Festival brings an international perspective to TMCC through its four-part film series that is free and open to all.

The lights dim, the big screen comes to life painting scene and character laced with dialogue. The ultimate expressive media of our time, movies capture the imprint of culture through the mechanics of its storytelling, and the details of how characters interact with their environment. Film, in other words, mimics life, distilling specific experiences to ask—and sometimes answer—difficult questions.

In its second semester, the French Film Festival brings an international perspective onto TMCC’s campus. The event, made possible by a Faculty and Staff Innovation Grant, began as a conversation between Foreign Language Instructor Tanya Farnung-Morrison and International Student Advisor Virag Nikolics. “We chose to focus on French films for two reasons—Tanya teaches French and also, because the art of film is such a defining part of French culture,” said Nikolics.

While films from other cultures are definitely in the works for the future as the film festival continues to grow, for now “francophone” (French-speaking) films will be featured in this four-part series. If you consider that French-speaking countries are basically on every continent (with 80% of worldwide French speakers residing in Africa) this results in a pretty diverse selection. Additionally, each film represents a different style or genre: there will be a feature film, a documentary, an animation and claymation film.

Throw out all your preconceived notions about foreign films. No, you don’t need to speak French (every film will have subtitles). “These films enable people to experience aspects of culture—how people greet and interact with one another,” said Farnung-Morrison. What you can expect to find are films that tackle topics you don’t normally encounter in American movies with a sprinkle of the French’s dark and oftentimes clever humor.

Each screening will open with a brief introduction to orient you to the film. Additionally French-themed refreshments will be available. Each film will be followed by a structured discussion where participants can voice their impressions and reactions to the film. “It really creates a community-like feel,” said Farnung-Morrison.

“The Film Festival is free and open to everyone,” said Nikolics, who encourages students to bring along friends, family and significant others—anyone, she says, who is interested in how other cultures approach broad questions about society, identity and the human condition.

The Films in the Series

Monday, March 4, 2-5 p.m. in SIER 108: Two Days, One Night. This Belgian-French-Italian drama film released in 2014 explores workers rights. The film approaches the topic in an unusual way: this isn’t the territory of unions or employability laws. Instead, Two Days, One Night asks the question: if you had to give up money to help a coworker in need, would you make that sacrifice?

Monday, March 25, 9 a.m. - 12 p.m. in RDMT 256: Faces, Places is a 2017 French documentary film, nominated for an Academy Award, that explores a multi-generational friendship expressed through visual art. Director Agnès Varda (who is 90 years old) teams up with French street artist known only as JR (who’s 35) for an extended road trip across France. The two visit small towns where JR installs large portraits across existing buildings.

Wednesday, April 17, 2-5 p.m. in SIER 108: Persepolis. This animated, black and white film is based on the autobiographical novel by Marjane Satrapi of the same name. It’s the story of a young woman coming of age in Iran during the Iranian Revolution. The story asks many questions about culture and identity.

Monday, May 6, 2-5 p.m. in SIER 108: My Life as a Zucchini. This Swiss-French stop-motion comedy-drama film appears deceptively childlike due to the colorful clay-characters. Yet, viewers will learn how appearances can be deceiving: the story examines the importance of family through the lens of abuse, tragedy and loss.