Learn the Story of You at TMCC’s Open Genealogy Lab 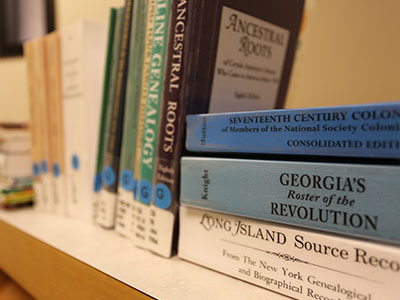 Less than 5% of genealogy sources are digitized; so knowing how to utilize your sources is key to your genealogical research. The TMCC Open Genealogy Lab can help.

Sue Malek has been teaching genealogy classes at TMCC long enough that she’s seen a shift in the practice. “This isn’t your grandmother’s genealogy,” she said, gesturing to a screen filled with data gleaned from a recent DNA ancestry test, mapping immediate family through sixth cousins and beyond. Unlike paper documents—upon which most of genealogical research has been based—”the DNA doesn’t lie,” said Malek.

Two students who are currently attending Malek's genealogy class—open to TMCC students, faculty and the public—have made shocking discoveries as a result of their work with Malek. One student, who is in his 60s, located his birth parents whom, prior to the class, were anonymous strangers. The other student discovered that the man he grew up believing was his father, wasn’t. “It’s really amazing what can happen,” Malek said, “Now that student is on a quest to find out who his father really is.”

What is the TMCC Library Open Genealogy Lab?

Genealogy, the study of ancestral family lines, is nothing new. The world’s largest genealogical library, located in Salt Lake City, Utah is operated by FamilySearch, the genealogical arm of the The Church of Jesus Christ of Latter-day Saints. The business of knowing family lines was of particular importance to the members of the LDS Church, and as a result, they have amassed records that trace ancestries both inside and outside the faith. The FamilySearch library offers free services to the public; the caveat, however, is that you have to physically go to the library to utilize these services.

This is what inspired Malek to push TMCC to become an Affiliate of the Family History Library—in becoming an affiliate, the TMCC library acquired many of the resources in the Family History Library in exchange for hosting guest speakers and remaining open and accessible to the public for a certain number of hours. However, Malek’s genealogy resources—even most of her books—are available to be checked out and used.

Malek also insists on utilizing resources that are free. “I always tell my students that they don’t have to spend money to find out about their family history.” The majority of the services, too, are digital, and available online. In addition to FamilySearch.org, she also recommends Internet Archives, a source of digitized books whose copyright have expired reside.

The TMCC Library Open Genealogy Lab offers specific resources that can be accessed through the TMCC Elizabeth Sturm Library.

Why is genealogy important?

In a time when information is digital and the majority of it is oriented toward our present or future lives (even though Facebook gestures at an investigation of the past with its daily “memory” for us), the deep past—the past beyond the grasp of contemporary communication and social media technologies—isn’t necessarily at the forefront of our attention. And yet, this deep-past holds the key to our identity, what Malek calls “the story of you.” Perhaps this is why genealogy has started to gain public attention: using DNA testing, the past is beginning to lose its opacity, shining a light on the details of our origins.

There are plenty of articles listing the reasons why you should make an effort to know your family history, with reasons ranging from personal gain (you’ll feel wiser, have better mental health and feel more satisfaction in your life) to more socially-driven motivations (family histories are important historical documents, family histories can document the unwritten histories of women, minorities, the poor and disenfranchised). Whatever the motivation, the popularity and visibility of genealogy is on the rise, and has firmly grasped the public imagination through recent television shows, like “Who Do You Think You Are?” and “Finding Your Roots.” The idea of knowing your origins seems to have taken hold of the public imagination... and our campus through the continually growing resources at the TMCC Library Open Genealogy Lab.

“Everyone wants to know more about themselves. People get so excited about it. It’s not a subject like Math or English—this is about finding your spot in history,” said Malek.

If you’re ready to start learning more about your family history—and yourself—Malek’s genealogy classes are offered every Friday from 11:30 a.m.—2 p.m. She often invites guest speakers who provide targeted advice for students and researchers of genealogy. These classes are open to TMCC students, faculty and the public. For more information, call 775-673-8260.