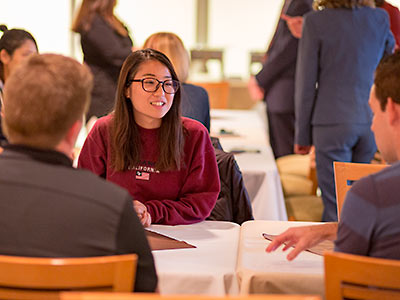 Around 50 students, representing 20 countries from around the globe, are enrolled at TMCC in Fall 2018, but the International Education Week (IEW) activities are meant for everyone.

“International students bring the world to our campus here at TMCC. They bring their experiences, points of views, and cultures,” said Tanja Hayes, Economics Instructor. “If we are interested and open, we can learn so much from each other. Sharing and experiencing different foods, languages, music - these are all ways in which we can become richer and more empathetic humans.”

IEW kicks off on Tuesday, Nov. 13 and will celebrate the benefits of international education and exchange worldwide.

“Our role as global citizens has never been more important,” said Elena Atanasiu, Foreign Language Instructor. “As the interest and commitment to cross-cultural learning and understanding have grown, these events are a great occasion to engage and promote cultural diversity and social cohesion on our campus.”

Hayes and Atanasiu are co-chairing the International Faculty Advisory Committee, which planned IEW.

“A great addition to this year’s IEW events are the art, dance, and movie components,” Atanasiu continued. “Students and all other interested members of our community will have the unique opportunity to enjoy the French movie Beauty and the Beast, get some free Greek mini dance lessons and make colorful paper flowers while sipping delicious punch.“

Faculty members play an important role in IEW, as they will lead various activities such as the Faculty Speaker Series, featuring facets of international travel and study abroad opportunities. A Faculty Panel and Discussion on Wednesday, Nov. 14 at 2 p.m. entitled “The Great War: How, Why, Its Impact and Horrors,” will feature six TMCC instructors, experts in this field.

“It was 100 years ago that we witnessed the end of the carnage of World War I, which morphed into the holiday Veterans Day,” said Neil Siegel, Librarian. “This war had great ramifications in the shaping of both the 20th and 21st Century. Our panel of experts will present numerous aspects on how this was not the war to end all wars.”

IEW will conclude with the Night of All Nations event, at the Joe Crowley Student Union at the University of Nevada, Reno on Friday, Nov. 16.

Another featured campus event series, the French Film Festival, will coincide with IEW to present a film screening on Thursday.

“The Festival seeks to internationalize the curriculum and the campus by "bringing the world" to TMCC,” said Virag Nikolics, International Student Advisor. “It serves as a platform to highlight global perspectives, comparing and contrasting one's own cultural lenses to others' and bringing the community together at large.”

Each screening begins with a film introduction and concludes with a post-film discussion to foster dialogue and community engagement.

This semester, the French Film Festival has offered four film screenings, with two remaining. Films are screened in French with English subtitles and are open to the public, and are funded by a Faculty and Staff Innovation Grant.

The concept of the French Film Festival began when Foreign Language Instructor Tanya Farnung-Morrison gave a presentation about her study abroad experience in Spain as part of IEW 2017.

“A discussion followed about what efforts could be made to internationalize the curriculum, keeping in mind that not everyone has the chance to study abroad. The festival has been so successful that we are already exploring ways to continue the festival beyond this semester,” said Nikolics.

Farnung-Morrison agrees: “I've been pleasantly surprised at the interest and enthusiasm that my French 111 students have shown for the films. They have contributed to post-film discussions in a thoughtful way and, by viewing the films, have brought a more nuanced cultural perspective back into the classroom.”

Atanasiu and Hayes, along with members of the IFAC group, are former international students themselves. Each committee member either came to the United States from other countries, or they were American students who studied abroad.

“I am from Sweden, and I have always had an interest in seeing connections being made between students from different places,” said Hayes. “I was involved in the International Club in college, and I always got so much out of meeting people from different countries.

“At TMCC, we have students and faculty from many parts of the world, and IEW is a great chance to highlight some of the fun and learning that can take place when we have an international perspective!” Hayes continued.

The goal of IEW is to engage all students and faculty, regardless of their country of origin, in global discussions.

“We hope that many community members will participate in some of the activities they remember from the past years, as well as in the new ones,” Atanasiu said. “IEW is a metaphor for the change we aspire to on a global level. Every event we have planned will provide us all with the opportunity to participate, listen, learn, connect with many members of our small, but diverse community.”