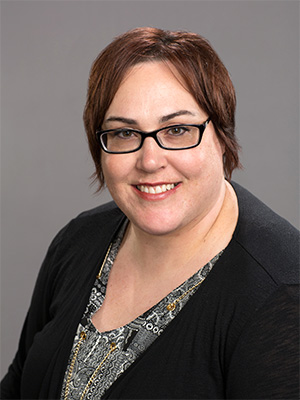 Jennifer Stevens has won not only one, but two top nursing awards in Northern Nevada during her less than five-year career so far, and says that her solid foundation in biology at Truckee Meadows Community College has helped propel noteworthy achievements.

She completed many of her prerequisites at TMCC before transferring to the bachelor’s program at the University of Nevada, Reno, Orvis School of Nursing. She began her Registered Nurse position at Renown Health in 2013, and is excited for the future in her profession.

“I’ve had a fast-paced medical career so far,” she said. “I had such a great relationship with my TMCC professors. They helped me not only learn my coursework, but what it means to be a professional.”

While at TMCC, she tutored in the Tutoring and Learning Center, and was an instructional assistant in the microbiology lab.

“I had some really great conversations with my professors, especially microbiology Professor John Adlish,” she said. “A group of three or four of us would sit around and talk with him about what we learned in class. It served me well. I thought about what we talked about when studying difficult parts of the nursing courses. It helped me through nursing school.”

While Stevens was in school, she worked in the Emergency Room at Renown Regional Medical Center as a unit service representative. In this position, she input physician orders, and placed consult requests by emergency physicians. Stevens helped manage emergency department throughput, requesting medical records from other offices to assist with emergency physician decision-making. She also assisted with administrative aspects of patient admissions and discharges.

Northern Nevada Nurses of Achievement selected Stevens as the 2014 Rookie of the Year.

After about one year, she transferred to the oncology unit at Renown Regional Medical Center. Close to one year later, she was promoted to Nurse Educator of the unit, and said that it has been a very fulfilling three years.

This talented nurse then was awarded the 2016 Nurse Educator of the Year by Northern Nevada Nurses of Achievement.

“It’s prestigious, a tremendous honor because you’re nominated by a peer,” she said. “It’s like being in the ‘hall of fame’ of nursing in Nevada.”

The oncology unit is where Stevens feels she can make an impact in patients’ lives.

“I feel like when people get diagnosed, when they hear the ‘c’ word, it changes them; they realize what’s important in life,” she said. “They’re the most kind and generous patients, they want to participate in their care, they want to beat it and get healthy.”

It’s a place where the nurse-patient relationship is strong.

“You have rapport with them—you’re received well,” she said. “It’s exciting that they listen when you teach them. They want to live longer.”

“It takes a whole other level of expertise to be an oncology nurse—with watching for small changes in a patient’s condition, managing chemotherapy and much more, there’s a lot to it,” Stevens added.

Stevens Hasn’t Forgotten Her Base at TMCC

She said that at universities, there are sometimes 100 in a general education lecture course, so there isn’t a practical way an instructor can answer all of the questions that could be posed during class time.

“TMCC’s small classes helped—teachers had the time to answer questions and they cared about me as a person,” she said. “Biology Professor Melissa Deadmond never stops learning. She has a PhD, and just earned another master’s degree. She has so much to bring, to offer the students.”

Stevens said that the professors at TMCC are dedicated mentors.

“Beate Wone helped me learn an effective step-by-step method, how to follow the trail where it leads instead of just memorizing,” Stevens said. “She was awesome.”

For more information about studying biology, microbiology, or community health science at TMCC, please contact the Biology Department at 775-673-8251, and for the Maxine S. Jacobs Nursing Program, call 775-850-4054.