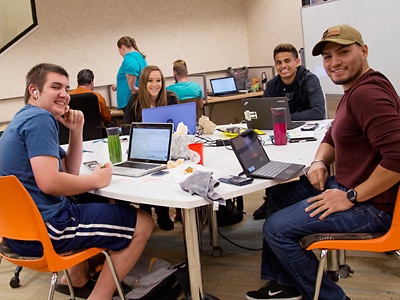 The Group members left to right: Thomas Gagnon, Morgan Estes, Henry Muller, and Victor Porras at the table, James Howard and Shannon Dennis are at the study station to left.

The Group is a story of 2017—it’s about people and the spirit of a college—a spirit that can soar.

It started with Morgan Estes, a student who is working on the prerequisites toward a nursing major at Truckee Meadows Community College. In one of her courses, she met another student, James Howard, who helped her study and encouraged her in the coursework.

“We met about a year ago—we were put into a group project for a psychology class,” she said. “Before that time, I was doing my studies alone, struggling. Last semester, we met another girl who was also struggling in her studies, and since then, we’ve taken other people under our wing into the group.”

Howard, with an almost piercing glance and a peak of a gray streak near his forehead, interjected one of his phrases that has become an “inside” motto for the unofficial study and support group that has grown to about 20 members so far.

“It’s not a group, it’s a discipline,” he added. “This Group is about education.”

The Group's laptops, calculators, notes and markers have expanded and are spread out over nearly an entire section of the Elizabeth Sturm Library, beyond the reference desk, and to the side of the large open-access computer workstations on the first floor.

Estes does not struggle anymore. She has even become one of the leaders of The Group, helping other students.

“My grades have gone up, my GPA has gone up, and I’m very focused now,” she said. “If it wasn’t for him, helping me along, and taking me under his wing, I would still be going home, yelling at my computer, failing my classes. That someone cares about me … sorry, I’m getting emotional.”

Estes pauses to gulp down tears and regain composure.

Together with Howard, she helps Thomas Gagnon, Victor Porras, Henry Muller, Shannon Dennis, and many others. Returning the favor, they also double-check her assignments. The Group spends most of the day in the Library working and consulting each other. They order pizza in.

Living to Education and Not to Deadline

“We’re all taking pre-calculus now,” she added. “One of us might not know something another person might know, it’s more brain power. A group for me is a lot better than sitting at home frustrated with a computer. How many times can you ask the computer for help?”

At this point, Howard rolls over his library chair and brags about The Group.

“Every other student is living to the deadline right now, but This Group is done with their homework for the semester (two weeks before finals),” he said. “We’re just doing some clean-up, and studying for finals.”

Gagnon had grappled with math in the Pre-Calculus course this semester before he joined The Group.

“I was just about failing the class, Math 126, and now I’m getting a ‘B’—they’ve helped me understand the course,” he said.

“When I first came to this group, I needed help with math,” he said. “If they don’t know something, they will find someone who does. I used to live by the deadlines. I used to get ‘C’s” in math, now I have an ‘A’. Now, they help me with anthropology and English.”

If One Doesn’t Know the Answer, Another in The Group Does

Members of The Group will continue to help each other by enrolling in some of the same course sections.

“The students who have met here are now trying to coordinate taking our next classes together,” Porras said.

Howard said that this builds confidence.

“There’s nothing like going into a new class already knowing someone in there,” he said.

Porras now wants to be in school from the inside out.

“To want to be here is everything,” he added quietly, waiting for his moment to comment.

Porras equated The Group to be like an older sibling in a family—an encourager or coach—where members take turns mentoring.

“Having a big brother is the attitude we’ve taken on—it started with James, and spread to all of us,” he said. “It’s to hold yourself responsible. They’re going to take this discipline with them and apply it to everything.”

Members of The Group remind each other to complete work.

“We hold each other accountable for assignment due dates,” Estes said. “We’re also slightly, friendly competitive, it helps us do better and succeed. It makes the whole group try harder, as well.”

Howard is a military veteran—bringing the mindset of responsibility for one’s actions with him, and that carriage of self-reliability has rubbed off on his fellow students.

“We already have a game plan for any failures,” he said. “We teach ourselves to hold ourselves accountable.”

Estes provides an example of this accountability.

“We study over the summer to get ready for our courses,” she said. “I want to be ready for math and not be lost. We’ll be more prepared.”

Howard said that in the past, he might be studying in the Library when a question would come up. He would then walk over to the Tutoring and Learning Center (TLC) in the Vista Building to talk with a tutor, and then have to walk back to continue working on a project that might involve research or computer access. If none of the tutors there at the time knew the answer to his question, he added that it would have been a wasted trip.

“Opening up the first floor of the Library, and moving the TLC over to the Library, it made The Group surrounded by tutors, the librarians, and the laptop chargers,” he said. “Everybody helps everybody; we all hold each other accountable.”

The Group has started to establish a reputation in the Library, where students are referred to them, to join their study sessions. The sessions many times last the entire day.

“The tutors sometimes bring students over to our table,” he added.

The Group Will Endure

Student Shannon Dennis already has two associate degrees from out of state. She is completing some Nevada System of Higher Education (NSHE) prerequisites at TMCC before transferring to the University of Nevada, Reno to study geology.

“This group has been a lifesaver for me, helping me to become more social,” she said. “When you have multiple people in a group, one person will be able to help. This is my first Group, and I absolutely love them.”

Dennis suffers from test anxiety. She said the informal, laid-back, comfortable environment of The Group has helped her bring a typical 78 percent average on tests up to an average of about 93 percent.

“It builds strength,” she said. “Here, I do the test and have someone check it with me. That prepares me for the bigger test.”

Members of The Group are friends, above all.

“I’ve met some of my really good friends in this group,” Estes said.

Will The Group scatter when its founders Estes and Howard graduate? Howard says that it will not disintegrate, but just keep growing.