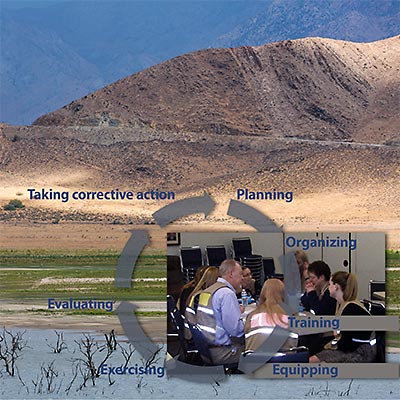 The job of preparing for and alleviating the effects of a disaster is addressed by occupations across a wide range of disciplines.

“Many agencies beyond fire, police and emergency management employ folks who are responsible for mitigation, preparedness and recovery functions,” he added.

Additional agencies that may be involved when a disaster strikes include those in the utilities, information technology, and transportation sectors, as well as public health.

Students Say the EMHS Program is Current and Pertinent

Brett Bindley, a Deputy Sheriff in Carson City, is working toward his Bachelor of Applied Science, Emergency Management and Homeland Security (BAS, EMHS) at TMCC.

He is becoming proficient in concepts and skills such as Incident Command Systems (ICS), and the new degree will better position him to be more eligible for promotions.

“Part of my objective is career advancement, and it also opens up a lot of opportunities,” he said.

Bindley is enthusiastic about the degree.

“I really like the program—I think TMCC did a great job of finding some good people, instructors who are already highly involved in the field, such as active emergency managers, employees at TSA and FEMA, a lead evaluator and planner for a FEMA subcontractor, and Fire Chief Darryl Cleveland,” he said. “All of my instructors have had many years in the field, or are still active.”

The bachelor’s degree program began at TMCC in Fall Semester 2016, and the first graduates will complete the program in May.

Most of the classes for the BAS-EMHS degree are taught online, making it more accessible for those living at a distance from the Truckee Meadows.

“The need for training in this field is rapidly increasing—I’m aware of this—just from what I’ve found out in the classes I’ve taken so far and from what I’ve seen in my work and in the discussions between the 20 of us in the program,” Bindley said.

Part of the growing demand has come from regulations put in place after the terror attacks of Sept. 11, 2001.

“Since 9/11, there has been a significant increase in the need for creating emergency management plans and meeting requirements of local and federal government agencies,” he added. “Cities are hiring dedicated emergency managers.”

Emergency management professionals prepare for and manage weather and fire events such as hurricanes, floods, and major wild fires.

Preparedness is defined by the U.S. Department of Homeland Security, FEMA as “a continuous cycle of planning, organizing, training, equipping, exercising, evaluating, and taking corrective action in an effort to ensure effective coordination during incident response.”

“Continuity planning is an important activity in emergency planning,” Whitesides said. “These plans are generally called ‘business continuity plans’ or BCPs in the private sector, and ‘continuity of operation plans' or COOPS in public agencies.”

Occupations where emergency management training can be applied include the following:

“In the field of public health, there are positions for public health preparedness directors,” he said. “Public health has an important role in emergency management that stretches from environmental response to disease prevention and detection.”

Whitesides will teach an elective class in first responder trauma management during Spring Semester, EMHS 322: Trauma Treatment in an age of Disaster and Terrorism. In Fall Semester 2018, he will teach a course that becomes a degree requirement, EMHS 422: Public Health and Disasters.

Bindley works in a 160-person department, and he is the first to have comprehensive training in emergency management together with homeland security.

“The public is giving a lot more attention to incidents like the subway bombing today (Dec. 12),” Bindley said. “The BAS degree will give a person a unique outlook to make them stand out in their career and be able to integrate and work together with multiple agencies—public safety depends on integration of agencies and interoperability.”

For more information on other Emergency Management Homeland Security courses offered in the Spring Semester, or about the bachelor’s degree in EMHS at TMCC, please call 775-336-4270.